You don’t often get back-to-back constructors with the same surname! Michael, no relation to constructor Kate Hawkins, is married to a Kate. Go figure.

I went to my computer to get the puzzle, and my son came into the room to tell us that Chadwick Boseman had died. So then I spent the next hour or two feeling sad and absorbing the many social media posts grieving that loss. A huge talent, a good guy, and astonishingly strong to have made so many films while fighting a cancer none of us knew he had. Suffice it to say, I’m not feeling too focused on the puzzle tonight. 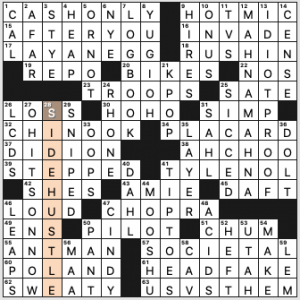 The crossword is jam-packed with great fill: CASH ONLY, HIT MIC, “AFTER YOU,” CHINOOK, TYLENOL, HEADFAKE, US VS THEM, “OH, IT’S ON NOW,” SIDE HUSTLE, K-POP, “MAHNA MAHNA,” and IDIOT-PROOF. ANT-MAN, as played by Paul Rudd in the Marvel Cinematic Universe, shared the screen with Boseman’s Black Panther in two movies.

Nice to see POLAND get a Marie Curie clue.

4.5 stars from me. Really enjoyed the puzzle. 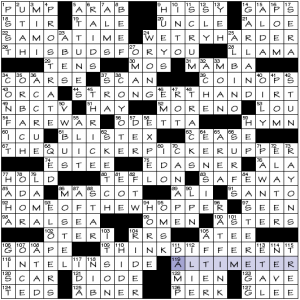 Classic advertising slogans reimagined as being applied to other businesses/industries. 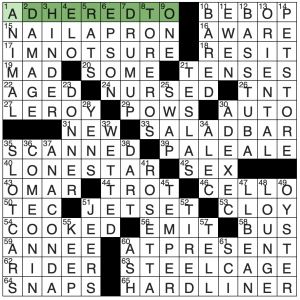 Fun one today! Quick time on this one, but I actually tried to rush. I had a decent time at the recent Lollapuzzoola, but I still do not fly around the keyboard while solving like some of these others. Which is weird since I have been solving for years on a computer! I think I need to stop using the mouse; that slows me down moving from the mouse to the keyboard and back. We shall see. In the meantime, great puzzle Gail! 4.4 stars.

I will stop there! Off to do more puzzles! 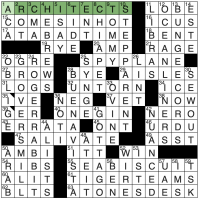 Stumped again. There was a slightly easier offering by Stan in the last week or so, which should have warned me. I have had some trouble sleeping this week, so that is my story and I am sticking to it! After the mighty struggle, I am surprised I only had the two error marks visible on the left side of the grid. But this was a brutal struggle. I may need a nap today. 4.5 stars for a toughie 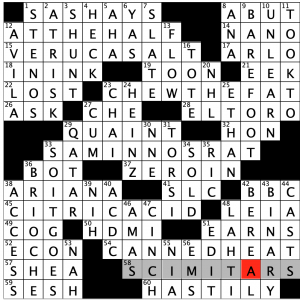 I confess that SAMIN NOSRAT is completely new to me, and I needed every cross, but I loved this grid! Looks like a themeless, doesn’t it? Not often you see a 7-letter entry at 1-Across in a themed puzzle. And it was fresh, too! Great fill included AT THE HALF (a bit of side eye for crossing AT RISK though), UNLEARN, SO IT GOES, Cuddle SESH, and BE REAL.

New for me was SCIMITARS and LAHTI. Unfortunately, they cross at the tough-to-infer T.

I went down a rabbit hole looking up SAMIN NOSRAT. She seems like the most fun person in the world. A Netflix documentary is coming out this October with the same title as the book. Looking forward to that!