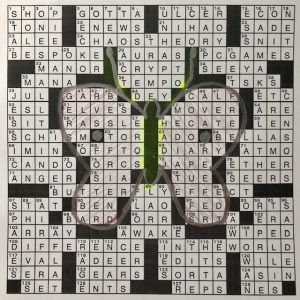 An educational theme for a change, no wordplay: 24a CHAOS THEORY is the [Mathematical field that includes the 81-Across], 81a being the BUTTERFLY EFFECT, [Subject of this puzzle, as suggested visually by its central black squares]. At first I was looking at the very middle, where the black squares look like a capital I, rather than seeing that as the butterfly’s body with the wings (complete with eyespots!) flanking it. The rest of the theme provides more info: 3d, 16d, 109a, and 112a spell out ONE SMALL THING / CAN MAKE ALL THE / DIFFERENCE / IN THE WORLD.

Good lord, there’s something more that I haven’t checked out yet: 62a. [A.L. East team … or, using the shaded square [see note], what a little movement by this puzzle’s subject might cause], TOR. *opens puzzle note to see what’s what* “In the print and online app versions of this puzzle, the black square between 62-/63-Across is shaded.” Ah! So I go look at the online version, and it is still just a black square, people. (Fail!) It’s a gray square in the print version/PDF. Put an N in that square, and the butterfly flaps its wings and changes a million other little things, till a TORNADO (TOR + N in the “shaded” square + ADO) forms. Neat!

Answer I flagged to go back to if my solution wasn’t taken as correct: 35a. [Magical resource in Magic: The Gathering], MANA. What the …? Did not know this at all. If you don’t play that sort of game and you don’t know your crosswordese animals in the ONAGERS crossing, you are outta luck.

Fave fill: COCOA PUFFS, BEST FRIEND (my best friend and I are marking 40 years of friendship this month! and I’m still 10 years behind her other best friend whom she’s known since toddlerhood), STREAMER clued as [Twitch.tv user], YORKIES, BESPOKE, and NI HAO. I also appreciated 5a. [“___ Catch ‘Em All” (Pokémon theme song)], GOTTA, as I am still having fun with Pokémon Go.

15a. [Word aptly found in “price control”], ECON. It’s kind of a shorthand word, but I’ll buy it as a legit word. Certainly I’ve used it in reference to the collegiate field of study since I was a college kid.

What’s in a name? In this case… more work.

THEME: Jobs are hidden on either side of notable names. 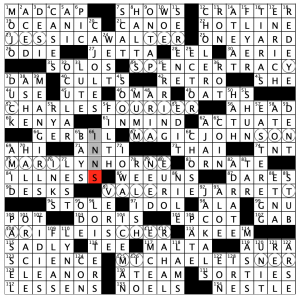 I feel like it’s been a long time since we’ve seen a cut-and-dry standard theme from Evan! This falls into that category for me (which is very nice as the WaPo continues to provide balance and varied theme types to please all solvers). I was able to infer the theme as soon as I saw the title and the circled letters, but it was still a very enjoyable solve. Enough bite in the cluing and the theme names to keep it challenging.

I was solidly familiar with exactly three of the names in the theme. I don’t think that’s a bad thing at all though; it would be boring if the solver were able to plunk in each name without a little elbow grease. For the most part, I figured out the job part first, then inferred the rest of the name. For instance: MARI??? Could it be MARIE? MARY? Aha! It’s MARILYN!

Plenty to enjoy here, even if you were getting accustomed to week after week of screwball themes. 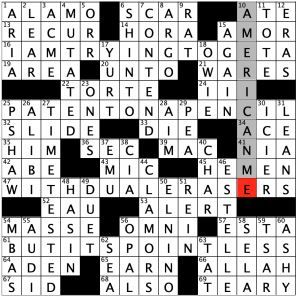 PATENT ON A PENCIL /

I feel like quip puzzles get a bad rap too often. I like them! Especially good ones like this one, where it doesn’t completely come together until the grid is filled (for me, anyway).

Also, from a construction standpoint, they’re much more difficult than they look. The quips have to be broken in logical places in order to be symmetrical. It’s no easy task to find a quote or joke or anything of that sort that fits. And what can I say? I’m a sucker for a good dad joke. I found it quite refreshing to solve a puzzle with a theme type I haven’t seen in Universal in a very long time.

New for me were AMERICAN ME and ASHY as an antonym to “ruddy.”

Very much appreciated the clue for 5D [Hockey legend whose surname sounds like a conjunction] ORR. I am constantly mixing up OTT and ORR , so this helped!

Not sure I understand 39A [Computer at the front of a machine?] MAC. Like, I know MAC is a compu… Oh! I see it now! The word “machine” has MAC in front! Cool! 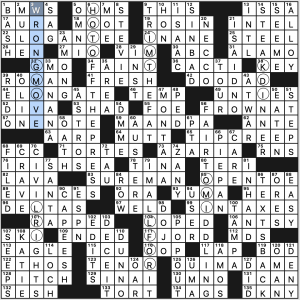 Fun entries and just the perfect title for this theme. I don’t think the puzzle needs the revealer at 86d.

I’ve never heard the phrase TIP CREEP [Gradual increase of gratuities], which sounds more like the pushy bellhop with his hand out as he drops your bags off in your room (not that I’ve ever had a bellhop drop my bags off in my room).

What else is good? SIN TAXES, ONE NOTE, MA AND PA, IRISH SEA, DOODAD, and these fun colloquial phrases: “OUI, MADAME,” “I SAID NO!”…”CAPEESH?” I’m not sure about SLOGAN TEE [Top that makes a statement?]. Anyone ever encounter that phrase in the wild?

I’m late getting this posted, so I will leave it there. Decent theme with good fill. 3.5 stars.

This was fun! The theme answers are common phrases with the preposition removed and words rearranged so they are literally true. It’s easier to show than describe. I put them out of order because that’s how I solved them. 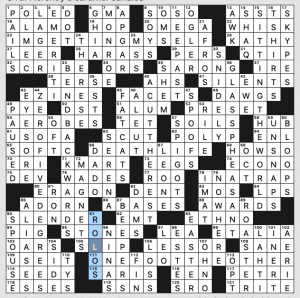 I love this theme. It’s fun to solve and accessible to Sunday solvers. I’m also a big fan of the cartoon riddles with the same idea – what are those called?

I’ll skip a few other things – this writeup is already late.

What I didn’t know before I this puzzle: that the awesome KATHY Najimy voice Peg in “King of the Hill,” and that ERAGON is the first book in the Inheritance Cycle. Never seen the one or read the other.

I lied: one more thing. Can we please retire EZINE? Pretty please? Thanks ever so.