This week, Matt challenges us to find a well-known business magnate. 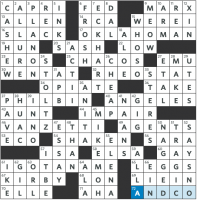 There’s a hint-y type clue at the very end:

And … hmmm. At first I thought I was looking for partners (business or otherwise) of people mentioned in the clues — i.e. Martini & Rossi, Gilbert & Sullivan, etc. Or maybe entries with CO in them: CHACOS, ECO, etc. But no: turns out that an early error in filling the grid (i.e. GATES instead of ALLEN) led to the first step. We’re looking for CO-[role] for these folks. Namely, Co-Founder, Co-Host, Co-Defendant, etc. And who are these people?

The last one confused me — Tom Hanks played Pilot Chesley “Sully” Sullenberger and Aaron Eckhart played Co-Pilot Jeff Skiles. So maybe it’s that the clues are meant to be read as [Co-whatever] and the extraction is the primary [whatever]? In any case, it works either way, although I stared for a while, unsure of what step to take next, until I got a nudge (from a Co-solver) suggesting that I take another look in the grid. And, lo, in a very Gaffneyesque fashion, there were six entries that contained all the letters in the “Co” entries, plus one extra letter:

ANCHEL? Ohhhh, in grid order those letters spell CHANEL, who is indeed a well-known business magnate, and her first name is COCO, which kinda fits with the theme mechanism. She was also — it has been well-documented — a well-known anti-Semite and a Nazi collaborator, so her AND CO were SS-Oberführer Walter Schellenberg and Baron Hans Günther von Dincklage, for and with whom she operated as a secret agent, intent on persuading Churchill to pursue a separate peace between Britain and Germany. There’s also evidence that she managed to use the German occupation of France (and its “Aryanization laws”) in her favor to eliminate Jewish rivals in the French perfume industry.

Just speaking personally, at this political moment I felt … not great … solving a metapuzzle (no matter how excellent the construction) where the answer was a notorious anti-Semite and Nazi collaborator. I can’t imagine any political moment, tbh, when I wouldn’t feel downright shitty being reminded of cultural figures who use their influence to further the power of fascists.