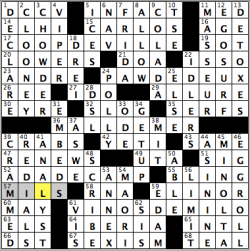 Hello everyone! Time to break out Earth, Wind and Fire because we have officially reached September! Doesn’t it feel as if MAY just like a couple of weeks back (60A: [Fifth month])?!

We hope that you pardon Liz’s French in today’s grid, as five theme answers are punny — and funny — takes on phrases/nouns that have French origins, all containing “de” (of) in the middle.

If in the event the theme did not fill you up with some French pastries crossword-style, we also have MASSEUR lurking in the grid as well (11D: [Rubdown expert]). Them there’s a neighbor of France also included in IBERIA (64A: [Portugal’s place]). Seeing ANDRE, the two-time US Open champion, made me super sad because I should have been typing this review while at the USTA National Tennis Center and covering the US Open in person, but the coronavirus — and how that was handled from the off — put a kibosh on those plans (23A: [Tennis great Agassi, author of “Open”]). Lots of long fill in the corners, and I probably enjoyed EGOSURF the most out of all of them (12D: [Search your name on Google]). I don’t do that, but I look up my website’s name on Google enough times, so I guess I’m guilty in doing that in a way!

“Sports will make you smarter” moment of the day: CARLOS (15A: [Grammy-winning guitarist Santana]) – Physics/science wonks will have a wonderful time picking apart and explaining the video below, which is one of soccer’s all-time great goals that was scored by Brazilian soccer legend Roberto Carlos during a 1997 game against France. He made 125 appearances for the Brazilian national team and won the World Cup in 2002, as well as garnered many championships while playing for his club team, Real Madrid, but Roberto Carlos is best known for this mind-bending free kick goal from over 30 yards out against “Les Bleus.” Make sure you look at the replay of the goal to capture the true majesty/witchcraft of this strike…as well as the thick Scottish accent of Andy Gray in explaining the goal. 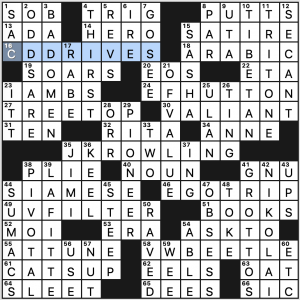 Part of me wanted these to be in consecutive order collectively. That is, since the first two start out with CD and EF, I wanted that sequence to continue with GH and IJ. Obviously, that’s not possible (or at least highly unlikely), so I’ll accept the next best outcome where all the phrases are in alphabetical order as we go down the grid.

There aren’t any sparkly long fill answers, but there are plenty of 7s I like: “ODDS ARE…”, BAD OMEN, TIBETAN, PIONEER, LAFITTE, GROTTOS, NIKOLAI, TREETOP, VALIANT, SIAMESE, and EGO TRIP.

I didn’t know TRITONE [Musical term sometimes called the devil’s interval]. Nor did I know that many star names are ARABIC. 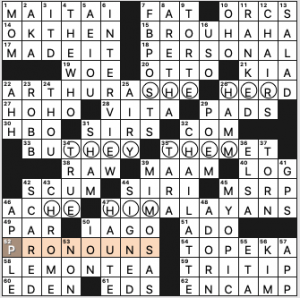 The theme is PERSONAL / PRONOUNS (18a. [Like the 52-Across featured in this puzzle], 52a. [Gender identifiers often separated by slashes]), and the circled letters spell out three pairs of third-person pronouns, in the nominative and objective cases: SHE/HER, THEY/THEM (often used by nonbinary people), and HE/HIM. The slashes, cleverly enough, are provided by that diagonal slash of black squares traversing the center of the grid.

I wasn’t actually bothered by the 8/8 themers being stacked with other 8-letter fill. I will always forgive a peaceful BROUHAHA.

Other fave fill: THE WHO, CHAI LATTE, FB POSTS (looks weird as a crossword entry, but I’m pretty sure I’ve typed that exact term a number of times), ARTHUR ASHE (’tis the season for the US Open—Naomi Osaka came to her march today wearing a mask with Breonna Taylor’s name on it), “BUT HEY” (odd entry, but I think I like it), and the fruity cocktail combo of MAI TAI and MIMOSAS. 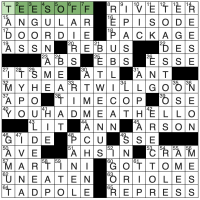 This week’s retrospective Jonesin’ puzzle is one that I am sure elicited belly laughs in 2005, because I sure chuckled when solving these theme answers!

Hilarious! Instead of do or die, you have to read this as “Door, die!” We also have plays on My Heart Will Go On, “You had me at hello” and got to me as the other theme answers. Excellent! Funny, but just corny enough to still elicit a partial groan. All contributing to a great solving experience. 4.6 stars for this walk down memory lane.

That is all! Another oldie Jonesin’ next week! 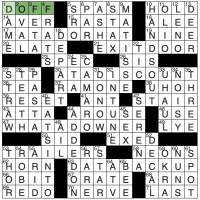 This is a new name in the database! Is this perhaps a debut puzzle? If so, congratulations! A very fine puzzle indeed! I tried to figure out the theme as I was solving, but I needed the revealer:

Very nice! Couldn’t figure it out while solving, but it isn’t very complicated at all. If this is in fact a debut, full congratulations from me! And keep them coming! 4.4 stars.

A few odds and ends:

Let’s get down to business! Okay, maybe not down, but it’s definitely across in a sense. 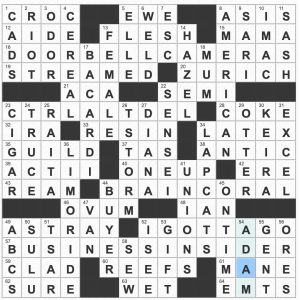 Gotta get this part out of the way first: For me, this puzzle needs circles in order to be enjoyed to its full extent. I solved on the web app, and I grokked the theme, but did not want to count letters in order to enter INC, or LTD, or LLC before filling in the whole entry, so the synergy that could’ve happened between the theme and the fill never materialized for me. I know I bring this up often, but I feel it’s important to do so because Universal is offering two different solving experiences, one with circles (as it should be presented) and one to the masses without. I am so looking forward to the fix, which I’m told is coming.

The puzzle itself was a lot of fun! When I see Evan’s name in the byline, I am confident that the grid will be lively and the clues will be fresh. This one certainly did not disappoint in that respect. All of the themers were fun to uncover (BRAIN CORAL was new for me, but I like the visual!). I particularly liked the attention to inclusiveness with the clues for AMERICAN and FEMALE. I GOTTA GO, LAP CATS, LIMO RIDE… all nice.

Had no clue that the singer of “Ex’s & Oh’s” was ELLE King. And I entered MUNICH before ZURICH despite spending a decent amount of time in both cities to know the difference (A Swiss friend of mine told me this joke a long time ago: What do you call a collection of the most boring people in the world? Zurich. I don’t necessarily find that to be true, but I’m one of those people who can never remember jokes and for some reason that one stuck).

Thanks, Evan and Brooke! Awesome title too!