I wonder how this puzzle will go over with true Monday solvers and newbies. The puzzle itself is smooth and straightforward, perfectly pitched for a Monday. The theme took me a little bit to figure out even with the revealer. Just me?

The theme answers don’t immediately appear to have anything in common. 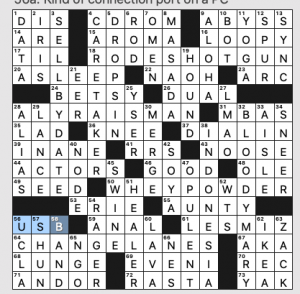 This collection seemed so random that I looked at the long downs, wondering if they were part of the theme. Nope. The revealer is down at 64a: [What you might do to pass on an Interstate … or a phonetic hint to the starts of 18-, 28- and 50-Across], CHANGE LANES. I started at that for a while until I realized that the first word of each theme answer is a homonym for something you drive on: ROAD, ALLEY, WAY. Aha! I enjoyed this, and I do wonder how it landed for less experienced solvers.

On our way out to dinner to celebrate David’s release from quarantine after his trip to CA, so I’ll skip to “what I didn’t know before I did this puzzle.” I had no idea that UCLA used to have a live bear on the field during football games. 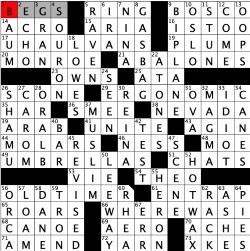 Two Mondays in a row for Jerome Gunderson. This time, the puzzle is full of…fillers! Speech fillers, that is.

The final theme entry at 66-Across, WHERE WAS I, is clued as “Lost-one’s-place words often preceded by the two-letter start of 17-, 29-, and 49-Across.” I think a lot of the awkwardness in the phrasing of that could have been avoided by putting circles in the thematic squares. At any rate, the theme is executed as follows:

I wish there were one more theme entry, given that the thematic portion of each theme entry is so short, but I’m not sure what that would be. The fill is mostly fine, although I’m not crazy about BOSCO (9A) and XKES (73A) — seems like one less-common brand name too many in a Monday puzzle.

Good title today, which isn’t intended to mean “estimates” but to identify individuals involved in a baseball game. 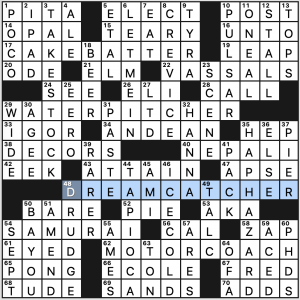 Simple theme, but consistent and well-executed.

Four theme answers of 10-, 12-, 12-, and 10-letters in length means there’s plenty of room for the grid to breathe. Thus we’re treated to strong fill like TAKE STOCK, HAPHAZARD, “LET ME IN!”, ICE COLD, CREVICE, VASSALS, SAMURAI, and TAPIOCA. I also like the ANDEAN and NEPALI near one another.

Apparently this is a debut, and that’s a lot of good fill to be proud of. However, I could’ve done without crosswordese EERO at 25d, especially when it could easily have been HERO by changing SEE to SHE. I also wouldn’t have minded 52a PIE becoming PPE by changing AMI to AMP at 45d.

But those are little things. For the most part, this was an enjoyable grid with a simple but effective theme.

Of course, we can’t have TAPIOCA in a grid without revisiting the classic Whose Line moment when Colin broke Ryan with that word. 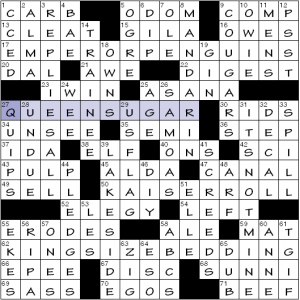 Smooth Monday from ZB. Theme is straightforward; the answers begin with a type of ruler.

Really not much that I’m finding notable among the ballast fill. It’s all just nondescript good fill with Monday-friendly cluing. It’s a very solid crossword.

There’s a lot to like in this puzzle, and a few things I did not particularly like, but on balance, I’d say this was a good and definitely challenging start to the New Yorker week. 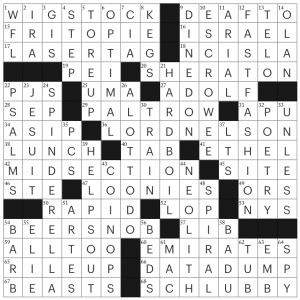 The long entries in this puzzle were the definite highlights: SPINDERELLA / FAST FASHION / WIGSTOCK / FRITO PIE / LASER TAG / EMIRATES / DATA DUMP / SCHLUBBY. Excellent entries across the board, and a particularly strong WIGSTOCK, which is just super fun and fresh.

The solve itself played really hard for me today, and most of my trouble came in the NE corner. I can never remember how to spell SHERATON and had about five different iterations of SHERIDAN SHERADIN SHERADON before I landed it. TELO is not great, and OLAN was unfamiliar to me (but sounds delicious and is definitely going into my wordlist), and ESCROWEE is downright terrible, so I just couldn’t get a foothold in there. I also was disappointed to see DEAF TO in that corner; even as part of an MLK quote, there’s no denying that DEAF TO is ableist language that uses a term related to a disability as a negative. I’m working on removing terms like this from my own vocabulary, so I am probably particularly sensitive to them right now. Also, I’m not sure about including LORD NELSON in the puzzle, even with a clue that calls out his defense of the slave trade. At ten letters long, it takes up a lot of real estate, which kind of feels like putting a monument to LORD NELSON into the crossword puzzle!

That corner aside, there was a lot of other fun stuff in this puzzle. I loved BEER SNOB and its clue [One really into I.P.A.s, say], and the UMA / PALTROW stack and matching clues was super cute (although see below re: representation). I as also delighted to learn about the CIA‘s role in promoting modern art.

Overall, this was a challenging puzzle to kick off the week that I mostly enjoyed, but it had a few features that turned me off a bit. Several stars for the fun long entries!