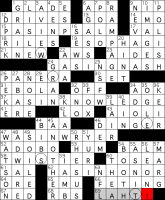 hello and welcome to episode #639 of matt gaffney’s weekly crossword contest, “Can You Find a Better Example?”. for this week 4 puzzle, we’re told that this week’s contest answer sounds like something you’ll want to do after solving this meta. okay. what are the theme answers?

based on the title and the parenthetical notes, i thought the first step was pretty clear: think of a better example, i.e. a synonym starting with the same letter, where the first letter isn’t silent. i came up with these:

okay, now what? well, the fact that the clues mentioned spelling something out over the phone put me in the mind of phonespelling, the non-unique association of letters to numbers associated with a phone keypad. so 2 = A/B/C, 3 = D/E/F, etc. i thought it would be really clever if the grid contained a different 5-letter answer spelled out on a phone using the same digits as in PAEAN (72326), and so forth. (having five additional shortish theme answers in the grid seemed plausible, as there was likely some extra hidden material to warrant the somewhat oversized 14×17 grid.) i spent a while looking for these but didn’t find them. even the simple KEN (536) did not have an equivalent in the grid among the 3-letter answers.

what else is there? i thought about homophones too, since the instructions certainly suggested homophones, as did the idea of spelling something over the phone. WITTIER is a homophone of the poet john greenleaf WHITTIER, but he wasn’t in the grid or the clues. HAIL and HALE are homophones. PAEAN is close to PEON or maybe PEEIN’, but … yeah, no.

putting the puzzle aside for a couple of days helped. when i came back to it, i more or less immediately found the extra theme answers i was looking for. no phonespell, just a transaddition (i.e. anagram plus one extra letter):

taking those five added letters in grid order (circled in the screenshot above) gives WREST, which indeed sounds like something you might do after solving this meta. (in fact, i did just that, as i cracked the meta last night just before bed.)

so, i liked this meta, but the KNEW/KNOWLEDGE thing does kind of bug me. i also feel like the final step (locate transadditions in the grid) has become a little bit predictable at this point; the solving numbers on the leaderboard are somewhat higher than last week’s “week 3” puzzle, which is modest further evidence on that front. i really was expecting something a little more apt to this mechanism, like phonespell or homophones. that would’ve been cool.