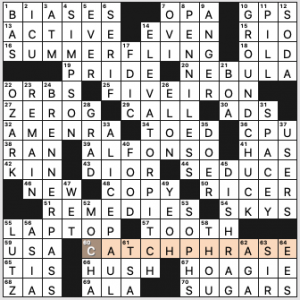 It took me a minute to understand what the theme revealer was getting at. 60a. [Popular expression … or what the opposite of the answer to each starred clue is?], CATCHPHRASE? The constructor reimagines CATCHPHRASE as “phrase relating to catching things,” and considers its opposite to be, basically, a “throwphrase,” a phrase that ends with a word that also means “throw”:

Not the usual “yet another iteration of a basic theme type” for this Wednesday puzzle.

Been a while since I took a deep dive on a puzzle’s representation. Here we have AMEN-RA (African), ALFONSO Ribeiro (of Trinidadian descent), maybe-not-straight DIOR, women’s soccer in the USA clue, drag in the BOA clue, PRIDE month, Laura Linney in the OZARK clue, ALICE PAUL, Michelle YEOH, and gay legend SIR Elton John. On the straight white guy side, there’s just Jason Bateman and ELON Musk. Ahhh, a good balance. (Note: A 50/50 split between straight white men and everyone else combined would not be a fair balance, as those chaps make up maybe 25% of the US population and an even smaller proportion globally.)

I am road-tripping again, this time from Tacoma to Denver to install my son into his third year of college. Today’s journey spanned Washington state and the panhandle of Idaho, and we’re settled into our hotel in Missoula, MT. The stretch of I-90 from Coeur d’Alene to Missoula is stunningly beautiful (if you’re able to look past all the Trump signs) and the weather was equally gorgeous today. But I’m very tired and frankly not feeling 100%, so I will keep this short. 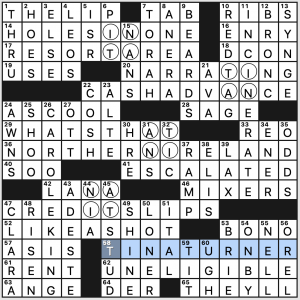 “Simply the Best” is a TINA TURNER album which includes her cover of the song “The Best”. This puzzle “turns” TINA four different ways throughout the grid, as denoted by the circled squares.

I thought the theme was cute once I got to the revealer (58a, [“The Best” singer, and what this puzzle is, in the circles]). The idea that the puzzle itself is a TINA turner was good for a smile.

And most of the entries involved in the turning of TINA are at least 9 letters in length, and there are a lot of them. Most of them are good too, like HOLES IN ONE, CASH ADVANCE, “WHAT’S THAT?”, and NORTHERN IRELAND. I also liked LIKE A SHOT, though it’s not involved with the theme. In the Down direction, CAROLE KING stands out.

However, all those long Across entries come at a price, and it felt pretty heavy, starting off with UNELGIBILE [Not qualified] which I’m sure was the first choice for very few people.

That western central area is laden with crusty fill like AWNS, OTT, COSH, and ALTE. Elsewhere there’s ENER, ANGE, ENRY, and ON BY. And [Issuance from a returns department] seems like it wants a singular answer, not CREDIT SLIPS.

Since I encountered all of those before grokking the theme, the puzzle was running at a deficit for me. But you know what, the cute idea for the theme, and the realization that there are so many long Across answers started bringing things over to the plus side. So while I’m no fan of entries like AWNS, COSH, and ANGE, I can get past them this time. I wouldn’t say this puzzle is “simply the best,” but it won me over. 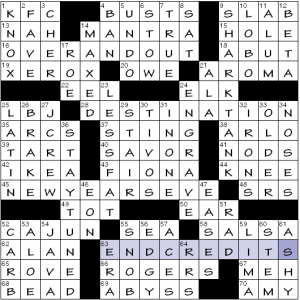 Let’s cut to the chase.

Good, simple theme with a punny element. Well-made crossword, though I don’t know if it will make a lasting impression. Definitely not MEH (67a [Doesn’t do much for me”]).

This was fun and felt very smooth while solving, although looking back, there are a few rough patches of fill that I could live without. The long stuff is clean if not terribly exciting, but overall I enjoyed solving it. 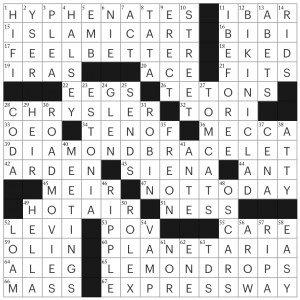 The marquee entry is DIAMOND BRACELET, which, sure, that is a thing, but I can’t say it’s a particularly *exciting* thing! Other long stuff includes HYPHENATES / ISLAMIC ART / FEEL BETTER / PLANETARIA / LEMON DROPS / EXPRESSWAY / ROAD MOVIES / BIKINI-CLAD. My favorite long entry/clue pair was right at 1A: [Breaks one’s word?] for HYPHENATES. Clever!!! I’ve always found it a little odd that “ISLAMIC ART” and African art and other non-European/American art frequently gets shunted into one room explicitly for its display while art that fits with the “western canon” can just live wherever in a museum. I hope this is changing?

Overall, the solve was HELLA smooth and mostly quite enjoyable! A few patches of things I didn’t like, but on the whole, still worthy of plenty of stars. 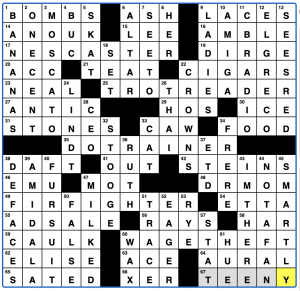 This week’s AVCX is a 2/5 difficulty puzzle from regular Paolo Pasco.  I sometimes disagree with the difficulty scale provided (and rating the actual “difficulty” of a crossword feels almost impossible), but that rating feels spot on for what’s going on under the hood here:

Looking at the original jobs clued across the theme entries, you get NEWSCASTER, TAROT READER, DOG TRAINER, and FIRE FIGHTER, each with their respective letter of WAGE stolen from them.  This was a nice, neat little theme.

To quote Paolo’s clue, “Wikipedia calls it “one of the best and most interesting card games for 3 players,” which, okay, whatever you say”, but I’m more familiar with DJ SKAT Kat’s duet with Paula Abdul. 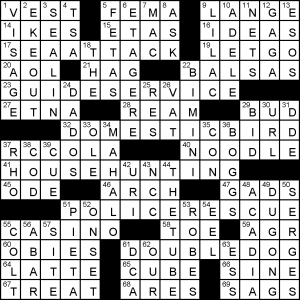 Solving this puzzle from top down, the first impression I had of the theme answers is that they seemed remarkably dull: SEAATTACK, GUIDESERVICE, DOMESTICBIRD, POLICERESCUE; the one exception is HOUSEHUNTING. Turns out it’s a symptom of the theme genre: DOUBLEDOG, where each of two parts can be combined with “dog”. This tends to create rather generic “green paint” answers of which GUIDESERVICE could be the poster child. Cramming five theme answers is also a design choice that has exacerbated that.

ESS plays a prominent role in glueing things together today. I can’t say I’ve had many occasions to talk about plural FETAS, DADOS or SERGES. The deepest cut is NCC – I don’t think that’s mentioned much in the shows, you kind of have to have noticed it sailing past?