The Fireball resumes without missing a beat with another man-made puzzle. This one is satsifyingly chewy.

I like puzzles that are difficult because the clues are vague or tricky, not deliberately obscure, and Peter delivers. BE STRONG is not the only possible answer for 1a, “Keep on fighting!” and it’s totally fair. The rest of that corner fell fairly easily. I enjoyed [Thing some people store their contacts in] for ROLODEX, although the present tense surprised me. I think of ROLODEXes as an artifact of the last century. 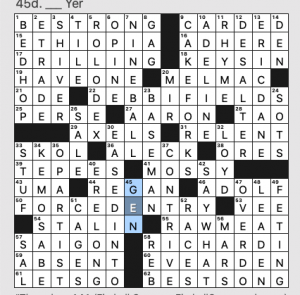 What I didn’t like: DESALTER. It’s definitely a thing, but Google tells me the term is more often used for machinery that removes salt from crude oil, not from seawater.

What I didn’t know before I did this puzzle: That EVE ARDEN starred in “Three Husbands,” that RICHARD I was the son of Eleanor of Aquitaine, that REGAN‘s last line in “King Lear” is “My sickness grows upon me,” or that the Fall Out Boy song UMA Thurman samples the theme from “The Munsters.” Here it is:

The main theme answers are well-known phrases with an added I at the end, hence the title.

Oh, we are embedded into a cabin a half-hour outside Yellowstone National Park. Tonight, a campfire. Tomorrow, the park. This post will be brief. 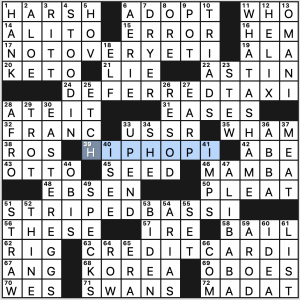 This theme had its moments and I thought it was cute for the most part.

Good highlights in the fill: “WHAT A SHAME!,” EASTER EGGS, and ALI BABA.

Did not know ROS [Esmé Bianco’s “Game of Thrones” role], a small-part character from the TV show, not the books.

Clues were quite chewy. I especially liked [Load-bearing machine] for DRYER.

Today’s NYT put the BIGGEST smile on my face when I figured out what was going on with the theme, and it’s been a while since it’s done that.  This was a stella experience, Sid Sivakumar!  Let’s look at why: 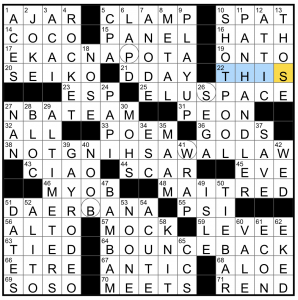 The lightbulb moment I had with 17A was such a delightful experience.  A “[f]ried Hanukkah treat” has to be a LATKE, but there’s more squares in the grid.  Maybe POTATO LATKE?  Nope, too few squares in the grid.  Coming back a little later once I had the acrosses, I realized that starting at the circled square (where I had a P) and continuing to the right, I could spell out the start of POTATO…which doubled back on itself to finish the rest.  Continuing backwards (or allowing this to BOUNCE BACK), I could make POTATO PANCAKE.  Using this on the rest of the spaces in the grid, you get SPACE CAPSULE at 25A, WALLA WALLA WASHINGTON for 38A, and BANANA BREAD at 51A.  This felt so straightforward, and yet felt so cleanly done.

I can’t think about WALLA WALLA WASHINGTON without thinking of Mike Bribiglia’s story about sleepwalking. (It involves the La Quinta in in Walla Walla)

Elsewhere in the fill: I spent far too long trying to figure out the letter I needed to complete GA? RODEO for 39D’s “Sporting event profiled in the 2014 documentary “Queens & Cowboys””.  Don’t make my mistake – it’s about GAY RODEO, not GAL RODEO.

THEME: One word in the theme answer can be found within the other word. 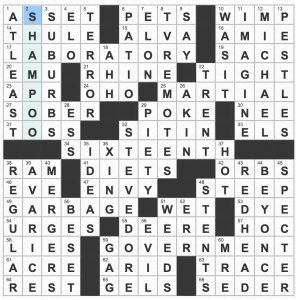 Usually I want to bang my head against a wall when the Universal asks me to count letters in theme answers, but this one didn’t suffer from that pitfall in the least today. In fact, I rather preferred it without circles. Something about finding the word on my own was more fun I think (I never paid attention to which letters I was supposed to be counting).

Some of the themers are a touch awkward in order to make it work. I mean, no one says LABORATORY RAT, do they? It’s LAB RAT! SIXTEENTH TEE is so oddly specific too, especially clued with the fantastic word “antepenultimate”!

Fun idea and a smooth solve! 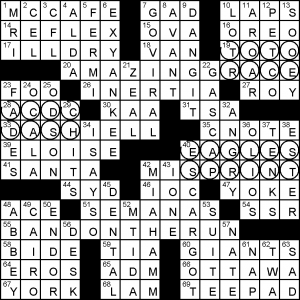 Wow! This is a clever little theme today from Canada’s David Poole! It’s one of a genre you don’t see too often, and which I seem to associate with BEQ, personally. The 70’s focused puzzle theme ends with BANDONTHERUN by Paul McCartney & Wings. Elsewhere in the grid, another three 70’s (to early 80’s) bands are balanced atop equal-sized synonyms for run: TOTO/RACE, ACDC/DASH & EAGLES/SPRINT. I added circles to make the theme more obvious.