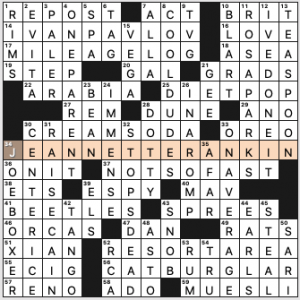 Somehow hardly anything in this puzzle resonated with me. There was a sports thing that was unfamiliar to me, and just in general many of the clues left me hanging until I had some crossings in place. An odd experience!

The sports thing is 26d. [Going away], IN A ROMP. I wasn’t convinced that the IN A portion truly belonged there, but I guess it’s fine. This “going away,” though, I think is sportswriter slang, as in if a team wins a blowout victory, they won in a romp, they won going away. Go figure. Then you add gendered COOL DUDES clued as gender-neutral [Hipsters] and you’ve got me looking askance at the puzzle again.

Hipsters are also a cut of women’s underwear. Speaking of, 34d. [Underwear brand] clues JOE BOXER, which turns out to now be selling clothes, socks, and PJs as well as underwear (including hipsters!) at Kmart and Sears. When’s the last time you bought some JOE BOXER undies?

Fave fill: ROSA PARKS, DIET POP and CREAM SODA (I think that can of stevia-sweetened cream soda in my fridge might fit both answers!), JEANNETTE RANKIN, NOT SO FAST, CAT BURGLAR, and IVAN PAVLOV. Speaking of the latter, my mom fairly recently came to realize that when we talk about our mouths watering at the sight of some delicious food, we meant it literally. The diversity of human experience includes people who don’t salivate extra when they smell pizza!

Overall vibe I got from this puzzle lands at about 3.25 stars, since I didn’t have much fun with it. The fill and clues often felt like they were for a target audience I’m not part of. (Cool dudes, truckers, hockey fans, country music aficionados, and people who spell out letters of the alphabet and pluralize them?) Kind of an odd solving experience.

The Inkubator team tagged this as “moderately challenging.” I didn’t find it challenging at all and I really enjoyed it, anyway. I’ve come to expect smooth, solid puzzles from Debbie, and this did not disappoint.

Natan Last had a piece in The Atlantic in March called “The Hidden Bigotry of Crosswords.” He doesn’t name the crossword editor who said that “MARIE KONDO wouldn’t be familiar enough ‘to most solvers, especially with that unusual last name.’ ” It wasn’t the first time I’d heard that story, and I don’t find it hard to believe. That’s the sort of nonsense that led to the creation of the Inkubator puzzles, so it’s fitting that MARIE KONDO shows up at 17a, amusingly clued as [Woman who’s made a tidy sum?]. 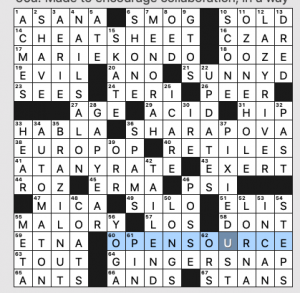 What I didn’t know before I did this puzzle: that Mama Quilla is the INCAN moon goddess. 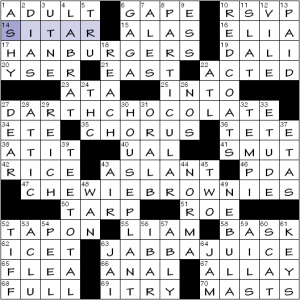 Once you get past the randomness of the theme—food puns involving Star Wars characters—it’s a fine crossword.

Okay, I couldn’t resist. Here’s some folks being silly and having too much fun:

(The videos featuring the original film scenes for this are far too cheesy.)

Short writeup today because I’m running late, sorry! This was a quick solve from Patrick Berry, with some fun long entries, a few meh long entries, and a bit of a dearth of representation. 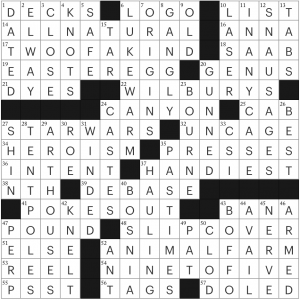 The long stuff today included: ALL NATURAL / TWO OF A KIND / EASTER EGG / SLIPCOVER / ANIMAL FARM / NINE TO FIVE / TENTPOLES / ART HOUSES / IN ANY CASE / SNAUSAGES. I wasn’t wowed by IN ANY CASE, which feels a little less of a thing than IN ANY EVENT (although they google equally well, so what do I know?). I enjoyed EASTER EGG and ART HOUSES.

Overall, stars for a well-made and fun puzzle (that I wish had a bit more diversity in it, but again, I have faith that Patrick Berry can and will do better on this front!). Please enjoy the musical stylings of Dolly Parton to forgive me for this very short post.

Theme: Phrases that have a hidden three-letter hat within them. Said hats are in circled letters and turn downward at the appropriate place in the entry. This is explained by the revealer AT THE DROP OF A HAT (59a, [Without warning, and where the starred answers get tricky]). 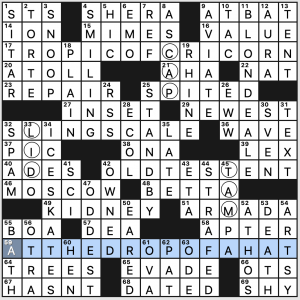 Ed. note: That’s as far as Jim got in the write-up before he lost wi-fi access in the wilderness.