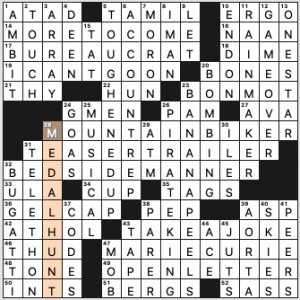 I showed up two hours late to the puzzle since I wanted to finish writing 10 postcards to voters for Sister District whilst watching some RuPaul’s Drag Race. Democracy and drag are great appetizers for intellectual pursuits like wrangling a crossword.

Well, this is the second NYT in a row that didn’t really grab me. I was not expecting that. Entries like A TAD, prefix ERGO-, suffix –ULA, ASP, INTS, unfortunate Paula DEEN, MORON, ILES, GO AS (duplicating I CAN’T GO ON, which is also crossing I’M AN), and END ON just left me cold. And why cheapen a basic word like LET with a clue ([Word that’s also a diminutive suffix]) that evokes suffix action when the grid’s got a couple affixes already? Two was already too many! Among the longer fill, TAKE A JOKE feels weird without a negation, doesn’t it? And TEASER TRAILER feels redundant; it’s just a trailer to me.

Tribute puzzle to the one and only… 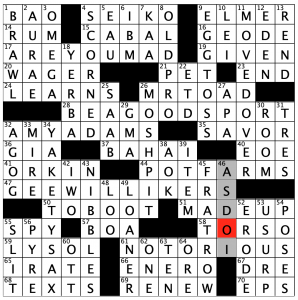 THEME ANSWERS: I feel like it makes sense to start with the revealer first.

I think any puzzle honoring RBG is gonna get a pass from me. I definitely enjoyed uncovering the revealer, since I had absolutely no clue what was tying the theme answers together. It was a nice surprise.

Felt like a lot of short fill in this one. Probably not much more than usual, but that’s what it felt like during my solve. BAO was new for me, though now that I watched a trailer of the Academy Award winning short film, it looks wonderful and it’s going high on my watch list. I probably could’ve watched it in the same time that I took to watch the trailer. Also, I thought any song that started with the word YAKETY ended in YAK. Who knew? YAKETY SAX is definitely a fitting name of that wacky little tune, however.

Liked: MR. TOAD, POT FARMS, YAKETY SAX, AMY ADAMS, EGG TOSS, MOVED OVER, and MOSH PIT, though I found it odd to clue that last one as a “location.”

Stuff that I didn’t enjoy as much included KAA, AOK, BOA/BAO, GMA, EPS, IWO, APA, ETD, EAU, OTT, AURAE, AGOG, AS DO I, and YERBA. Felt to me like there was quite a bit of crossword glue holding this one together. Also not sure how I feel about 64D [Important resource for a crossword constructor?] ORE. On the one hand, I love it. On the other, it feels like it’s navel gazing.

Overall, fun great theme that was choppy to get through. 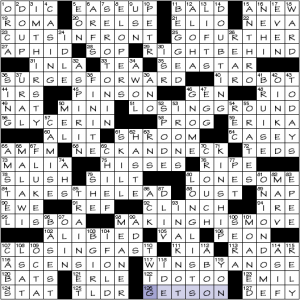 So this is a bunch of puns couched as a horse race call. It follows a chronological sequence.

Not going to lie, this theme did practically nothing for me. A pun’s effectiveness comes from the constraints on the form; there needs to be an extra level of cleverness to tie things together. Since thoroughbred monikers can be just about anything, there’s no challenge—not bite—to whatever wit is being employed. I mean, “Bottle Throat”?!? Come on. “I’ve Been Transferred”? “Pushy Linejumper”? These things are too easily sculpted. Conversely, the staid names such as “Gearshift”, “Mudslinger”, and “Understudy” just float along, making little impact. The whole affair feels like a washout.

Not theme adjacent (switcheroo!): 84d [Toy for one who loves being at the track?] TRAIN SET. 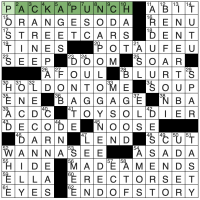 Greg has done quite a few Stumper puzzles, and I enjoy his puzzles a lot. Maybe that is why I was able to jam through this one. Certainly not Stumper tough by clues or fill, so a perfect fit for an LAT Saturday puzzle. I should show this puzzle to my wife and see if she enjoys it! That is my takeaway: this is a harder puzzle that people might find accessible if they want to tackle something a little meatier. 4.5 stars from me.

That is all! I have an idea for Labor Day Weekend: Do more puzzles! 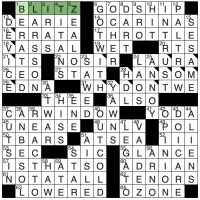 Toughie. I had some timer issues, so I think my time is actually a bit longer than the 15 minutes or so that I listed. Look at all those errors! I am finding that the brain cells don’t seem to be firing as quickly as they used to. I hope that doesn’t mean early signs of something serious, but I will continue to do puzzles until I literally cannot read anymore!

In summary, this was a little tough for a Stan puzzle, but it is still a Stumper! 4.3 stars.

Some of those clues that stumped me:

Have a safe and healthy long weekend!