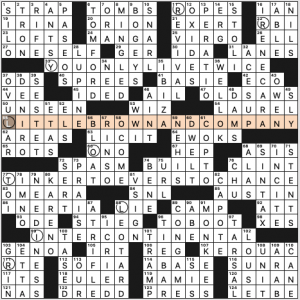 NY Times crossword solution, 9 6 20, “Could You Repeat That Number?”

I appreciate the title of this puzzle. If you are giving your phone number orally, be sure to repeat it, clearly, especially if you are leaving a voicemail—I have been broken by not being able to figure out what 10 digits the person has spoken. That has naught to do with the theme, mind you. The clues for nine themers (four long and six short ones, with their first letters circled by me to show where they are in my grid) are all missing a “double” or “triple” angle that’s needed for the answer to fit:

Neat theme. Now, David noted at Wordplay, “Also, did you spot the twist? There’s one more tricky clue in this puzzle … remember, I’m a magician!” I did see that 111a was tripled rather than doubled. Is that the twist, and there’s another doubled one somewhere in the grid that I missed? Plumbing his Wordplay remarks again, I see that the clue numbers are pertinent. All the “doubles” are doubled numbers (11, 22, etc.) and the Triple A bit comes at 111a. What else have you got, folks? It’s past 7 pm and I haven’t had dinner yet, so I’ll quit looking for the twist and carry on. (I guess the twist is just that 111a “triple” when the other nine themers are all doubles?)

This puzzle zipped by! Nothing really knocked me for a loop, none of the answers were things I didn’t know. There was some dusty old fill and whatnot smattered here and there (VEE which turns out to be a themer, but that doesn’t negate the dupe when there’s also V SIGN, SERT, RINSO, ELL), which is probably to be expected with the grid constraints of plunking these entries at those exact clue numbers.

4.4 stars from me. (Edits in the post are rendered in italics.)

This is not my favorite kind of puzzle. The theme answers contain types of tools. As far as I can tell, that’s the whole thing. They’re clued straight, so there’s no wordplay. It played for me like a 21×21 themeless, and the fill was not exactly sparkling, so it felt like a not-so-great large themeless. 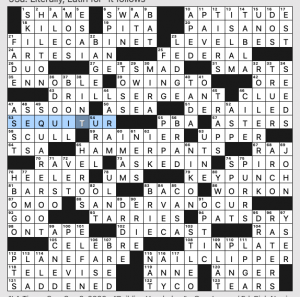 I thought the theme was “meh” until I got to SANDER VANOCUR and then it dropped to “feh.”

I could do without ACNED ever appearing again in a puzzle. Nothing else jumps out at me as bad fill; we have a bit of crosswordese (YSER and URAL and LA RAM come to mind). Looking at it again, I think it’s partly the grid I don’t like. The longest answers are 11 letters, so it’s chopped-up and there are a lot of three-letter words. That grid with a lackluster theme and a horrible theme answer = no fun.

What I didn’t know before I did this puzzle: that MIRA means “look!” in Spanish.

At 27×23, this puzzle might be too big for solving on the john, but boy that would be very, very meta.

THEME: Famous people named JOHN are on the edges of the puzzle. The first letters of their last names collectively spell IDRIS ELBA–LUTHER. 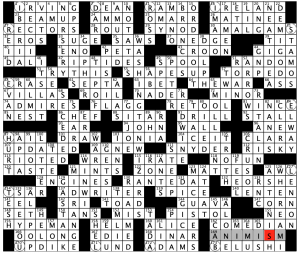 Here’s a list of the JOHNs in the puzzle: 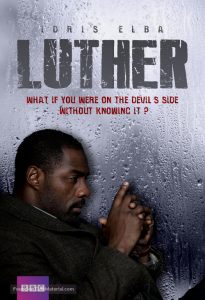 I may have missed something in the theme, so feel free to let me know! I’m neither familiar with JOHN WALL nor the TV show LUTHER, so there may be a very cool element I’m missing. Sounds like a nifty show though! Is it worth watching? I mean… ELBA was clearly at his best in the Cats adaptation, which is sadly the last thing I saw in theaters before the shutdown.

Evan provides solvers with a note before solving this one: Reading clockwise from top left, the circled squares will spell out an actor born on Sept. 6 and his apt TV role.

Happy birthday, IDRIS ELBA! And the role is, of course, {JOHN} LUTHER.

As for the wall of JOHNs, I really didn’t notice until after I finished solving! There were more than a few that were unfamiliar to me. For instance, I thought RAMBO was just… RAMBO. Like Cher, or Adele. DEAN, IRELAND, HURT, EVAN, LUND, and REID didn’t ring a bell during the solve either. So I mostly solved this as a themeless. I was actually surprised how much bite I came across in the clues. I figured since it was oversized, the cluing would be much easier than usual, but I didn’t find that to be true.

I’d be lying if I said this was my favorite WaPo, but I’m sure it will delight LUTHER and IDRIS ELBA fans. Or JOHN WALL fans. Them too. Still hard for me to tell which one is the honoree of the puzzle… even the (excellent) title fits either!

Timely puzzle, since we’re all headed back to school… sortakindanotreally.

THEME: Common phrases are interpreted wackily as having to do with school. 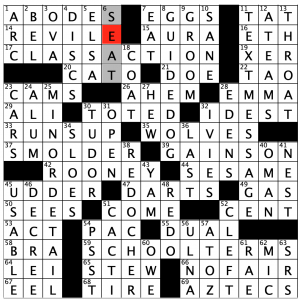 This is the kind of Universal puzzle I like. A tight, consistent wordplay theme. I particularly liked CLASS ACTION and TEXT MESSAGE. MINOR DETAIL feels like it had to do a little more than the others to fit in.

Had the most trouble in the NE since I entered FOE for 3D [7-Across, to Brutus] without looking at the cross reference. In retrospect, it’s rather delightful to think of an EGG as Brutus’s worst enemy.

The word count here, at 80, is awfully high. That typically means a lot of short fill that constant solvers are very familiar with, and this time is no exception. XER, A-TEAMS, BRA, LEI, EEL, MIC, SRS… ya’ know. That stuff.

Still, can’t complain too much about it. Especially with school opening in two days (for me). My mind is elsewhere!

Theme: DIS- is added to the beginning of well-known phrases. The revealer at 125a, AGREE TO DISAGREE, is clued [Leave an argument unresolved, and a theme hint]. You can re-interpret that phrase as “changing AGREE to DISAGREE” which is a subtle but clever way to hint that we’re adding DIS- to the other themers. 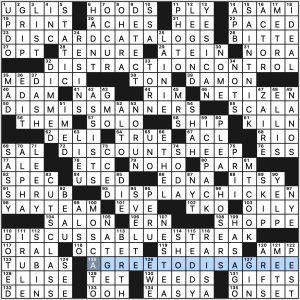 As you’d expect from a professional constructor like Ms. Ellerin, the addition of the prefix completely changes the meaning of the affected word. That is, the prefix doesn’t just turn the affected word into its opposite, as “disagree” does to “agree.” The fun is had when the change results in something completely unexpected. For that reason, I think I like DISMISS MANNERS the best.

In the fill, I’m partial to SAINT NICK, CUTS CLASS, NETIZEN (even though I doubt anyone uses that anymore), “YAY TEAM!”, SVELTE, and HOSERS. MOSCATO is good, too, even though that’s a bit too sweet for my tastes.

I did not know actress LAINIE Kazan who was in the My Big Fat Greek Wedding movies and was nominated for numerous awards. Nor did I know MT COOK, [Highest peak in N.Z.].