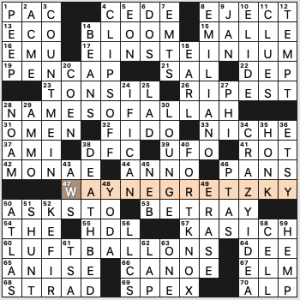 I like the disparate set of fields in which 99 is meaningful.

Fave fill: “COUNT ME IN,” FORT KNOX, and a CRAZY IDEA that just might work. It’s always nice to be reminded of Janelle MONAE, too.

Tired fill: DEP DFC ALP STRAD LLCS, plus NEB as discussed below. Did anyone fill in DFC without any crossings? 38a. [U.S.A.F. honor], what does that stand for, maybe distinguished flying … cross? Yep, that’s it; it’s also bestowed by the Army, Navy, and (somehow) Homeland Security.

A note from Wordplay: Constructor Jakob Weisblat is nonbinary and uses they/them pronouns. If that recent David Steinberg puzzle with the pronouns theme left you wondering when on earth you’d ever have occasion to use the singular “they” about a specific person (as opposed to, say, “somebody left their backpack over here”), now’s your chance. No misgendering the constructor, folks! Thanks.

Road trip update: Sheridan, WY to Missoula, MT. No more snow today, but the snow-capped mountains of southern Montana made for a stunning backdrop. The unexpected gem of today’s leg was the three-hour unplanned excursion to the Little Bighorn Battlefield site just off of I-90. In addition to seeing where Custer fell, I was most impressed by the memorial to the various Native American tribes who united in this battle to preserve their way of life. Well worth a visit if you’re traveling that way.

On to the puzzle! Our theme: The letters -BY are appended to the ends of well-known phrases. 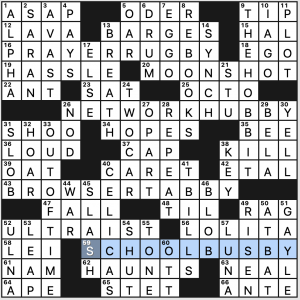 Fairly standard add-some-letters theme. Nothing really tickled me, but then there’s nothing to frown at, either. I vaguely remembered that a BUSBY is a hat, but not what kind. The internet tells me it’s a ceremonial military hat originally worn by Hungarian hussars. 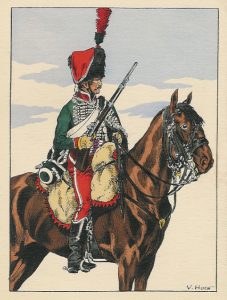 In the fill, the highlights are OUT OF TIME, MOON SHOT, and THE HOBBIT, with a gimme clue (for me, anyway) of  [Its fifth chapter is “Riddles in the Dark”]. (This is the scene where Bilbo has just found the Ring and encounters Gollum in a cave and where they engage in a battle of wits.) I do have to give a side-eye glance to ULTRAIST [Radical], because it doesn’t look like a real word—or one that anybody ever uses.

Lots to like in this moderately challenging puzzle from Natan Last! Fun long entries, cool grid design, some excellent colloquials, and interesting cluing. Let’s do this! 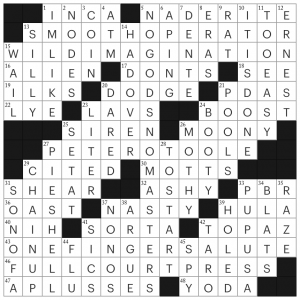 Something I’ve really come to enjoy about regularly reviewing these puzzles is learning the signature style of each New Yorker constructor, to the point where I could probably have a good chance of identifying the constructor just from the puzzle, which is extra true about Natan’s puzzles. The dead giveaway here is the NO GODS NO MASTERS down the middle of the puzzle, an [Anarchist/labor slogan] that just feels very Natan: political, progressive, and not at all shy about it. I love how clear Natan’s voice is in every puzzle he makes.

Overall, tons of stars from me. This was a fun solve, despite a few moments of “hmm I guess that has to be right…”, and I love how it is just packed with personality. 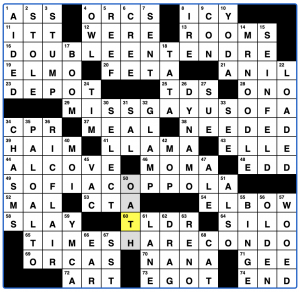 It’s another 2/5 difficulty week at the AVCX, this time with a guest grid from Ella Dershowitz.  The theme on this one eluded me until right after I finished filling in the grid, and it’s so obvious in retrospect I should have picked up on it sooner:

When the title suggests “side notes”, you should check the sides of the answers.  We’ve got all the notes of the scale progressing through the grid.

When I saw the clue “Wolves of the Sea”, this immediately came to mind. Unfortunately, “Latvia’s off-key 2008 Eurovision entry” doesn’t fit in the same number of squares as ORCAS 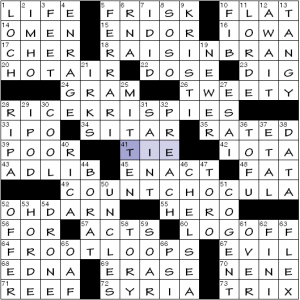 Appropriate solve, as it’s breakfast time as write this.

All are seemingly clued via quotes from advertising campaigns. Am not interested in breaking down which companies produce which cereals and whether there’s an imbalance, but I’m pretty sure it’s just two of the largest ones.

Seeing TIE in the center does make me wonder if there was an attempt to put KIX (“Kid tested. Mother approved.”) in that spot. Too difficult to fill? Too similar to TRIX?

With many of the clue choices—not merely among the ones I’ve reported above—it seems that a conscious effort was made to be more inclusive of women, so brava!

And now it’s time for me to have my own cereal-based breakfast, albeit with granola and Bulgarian-style yogurt. 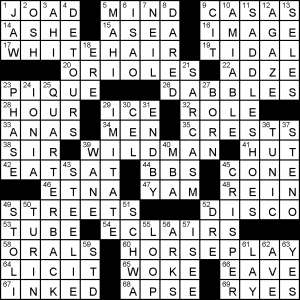 I guessed the theme type – words that follow x2 – at the first entry. If you see rather vague theme answers like WHITEHAIR, chances are you have one on your hands.

Today’s is HORSEPLAY, and unusually, it’s words that follow the first part, but which preface the second? I think? The entries make the most sense that way. So: WHITE(HORSE)HAIR [Capital of Yukon Territory / that thick hair in the mane of a horse]; WILD(HORSE)MAN [a horse that is wild / a man on a horse]; SADDLE(HORSE)SHOES [Uncommon alternative name for an American Saddlebred, a horse breed. HORSE SADDLE is also a thing, but all the others only work one way! / Metal bits stuck on the hooves of horses]; QUARTER(HORSE)BACK [Another US horse breed / while mounted.]