Note: Fireball is a contest this week. We will have a review after the submission period closes.

Road trip update: Missoula, MT to Tacoma, WA. We’re home now and nothing much of significance happened today. Western Montana was beautiful of course and eastern Washington was not so beautiful, especially as it’s covered in a layer of wildfire smoke. The most interesting moment occurred before the drive when I broke the waffle batter dispenser at the Staybridge Suites breakfast area resulting in batter gushing all over the counter and floor. Thankfully, we were able to stanch the flow quickly, and the employee was not perturbed but assured me “these things happen” with a lot of “darlin'”s and “hon”s thrown in.

Our puzzle today took me a while to suss out, as a good Thursday should. Each theme clue is cross reference to another word in the grid with the addition “et al.” It turns out that when you uncover the cross-referenced word and add -AL, you get a clue to the theme answer. 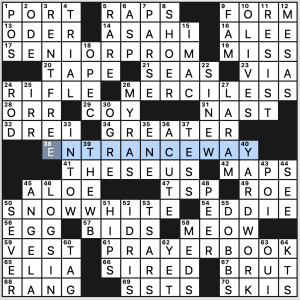 I like the wordplay here and the fact that it results in a satisfying aha moment. But I can’t escape the fact that the constant cross-referencing was annoying to a degree. I expect others will feel the same.

RENT FREE and YARDWORK are the highlights in the fill, along with THESEUS. I went with THE CW in response to the clue [“7th Heaven” network] instead THE WB. Are either of those still around? Could’ve done without SHOER, LARAM, ODER, IRR, and especially SSTS.

An enjoyable theme at heart, but the constant cross-referencing detracted from the fun somewhat. 3.7 stars.

Well, this is just a mess.  Let’s work our way through this “tribute”: 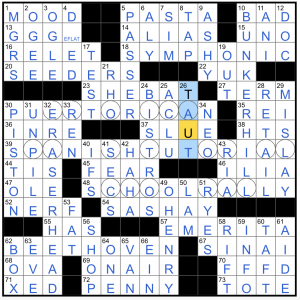 This is all over the place – we have circled squares hiding the names of BEETHOVEN‘s Third, Sixth, and Ninth symphonies (which, of course, are SYMPHONIC) in PUERTO RICAN (EROICA), SPANISH TUTORIAL (PASTORAL), and the dubious SCHOOL RALLY (CHORAL), which should be PEP RALLY to be an actual thing, except you can’t put CHORAL in PEP RALLY.

If that wasn’t enough pure, uncut BEETHOVEN content for you, there’s also the VAN that is part of his name, and a note that he would use EIN for the word ONE (64D), because he was German.  This is an absolute hodge-podge of ideas that aren’t enough to form a tribute puzzle on their own, but are even less of a tribute puzzle when placed together in the same grid.  This puzzle was an absolute slog to solve, and my MOOD is now BAD because of it.

Please enjoy Disco Beethoven now that we have all gotten through this together.

THEME: The word TIMES is replaced with X 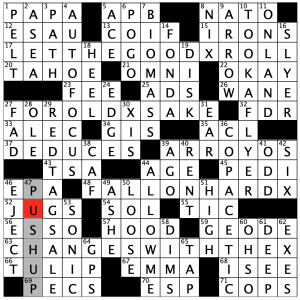 I really like it when Universal occasionally introduces its solvers to a bit of wackiness. David used to run themes like when he was editing Puzzle Society puzzles, but its understandable that the Universal has to play it more straight. Still, this is very enjoyable and a nice Aha moment should result, especially for newer solvers.

TOOK A FLYER is a completely new phrase for me. I thought I had something wrong. I kept checking every cross. For me, it actually corrects to TOOK A FLIER when I google it. Looks like it’s most frequently used in sports.

Thanks for this one! Great title, too! 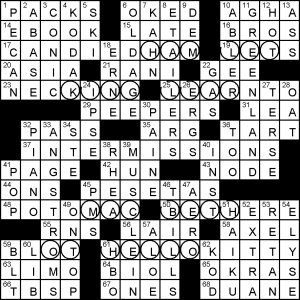 Quite a cool theme, technically, at least. Four quite beefy Shakespearean plays – HAMLET, KINGLEAR, MACBETH, and OTHELLO – are hidden between two grid entries. They’re circled in the answer grid for your convenience.

Question: How much effort would it take to get rid of AGHA in that top-right corner? 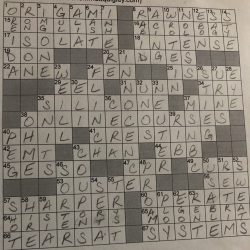 Good day, everybody! Hope you’re well and, for those in the West Coast who are near the wildfires, please stay as safe as possible and hoping for all of those fires to end soon!

If you are like me, you tend to enter rebus squares that have two letters inside of them horizontally, but doing that with today’s grid could have led to nowhere in terms of understanding four (well, eight) of the theme entries. If you entered those letters in vertically, you were in luck and also were able to see the hidden school “courses” (English, biology, history algebra) that appeared going across.

Once I read the note of BEQ’s website that it might be more convenient to solve on paper, that’s exactly what I did, and I probably would not have seen what the theme was for a longer time than the length it took me t spot it writing it down. Took extra time to figure out which line the rebuses would occupy, and thought for a second it would occupy the very top and very bottom line. But no! Outside of figuring that maze out, the rest of the puzzle played a little easier than the normal Thursday fare. Have to cover the US Open remotely in a few, so can’t stay long, but hope you had fun with this solve!

“Sports will make you smarter” moment of the day: NUNN (31A: [Heat point guard Kendrick ___]) – Currently still playing in this year’s NBA Playoffs, Miami Heat point guard Kendrick Nunn started his rookie season in the league with a bang, setting an NBA record for most points scored in the first five games of an NBA career by an undrafted player (112, previous mark was 105 by NBA Hall of Famer Connie Hawkins) .