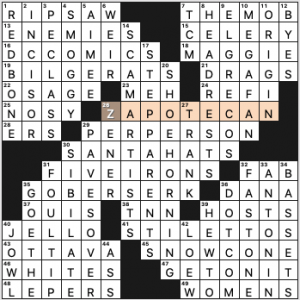 Quick review, as I’m entertaining the idea of migraining.

Standard Saturday difficulty for me.

Did not know: [Score marking to play higher or lower than written], OTTAVA; [___ Dolohov, one of the Death Eaters in Harry Potter books], ANTONIN; [Novelist Bender], AIMEE; and [Band with the 1974 hit “Come and Get Your Love”], REDBONE. Didn’t know the title or the band name for that song, but I do recognize the tune. Turns out they’re an indigenous American band. (Video below. It rocks.) “Redbone” is also the title of a Childish Gambino (Donald Glover) song from a few years ago.

Worst fill: 38a. [Onetime airer of “Music City Tonight”], TNN. Been a while since you could watch that channel on cable! Tough to stack 11s crossing 9s in the middle of the grid, though, with spacious corners almost as roomy as the midsection. Generally quite a smooth grid for a 60-worder.

THEME: Four-letter words whose middle letters are OO have the last letter omitted in common phrases to create wacky phrases. 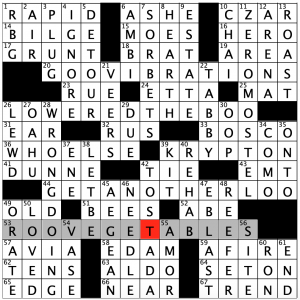 Classic theme type here, and one that never really gets old for me. These types of themes are what hooked me in the first place. Love me some corny wordplay.

Nice to start off with RBG in 1D– feels like a callback to a recent Universal.

Been a while since I’ve heard a ZERO MOSTEL reference!

I’ve noticed that for the past couple of weeks, my solve time is getting higher solving the Universal. I’m wondering if that’s just me, or if the clues are getting a bit harder.

I’m a bit confused by the title since it doesn’t really seem to have anything to do with the dropped letter, unless of course I’m reading something wrong.

Thanks for this puzzle, Mr. Wechsler! 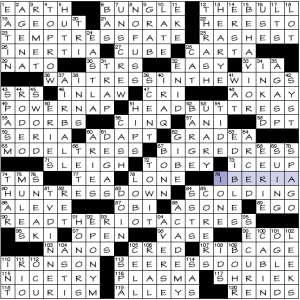 It’s an add-some-letters theme. In this case, as the parsed title indicates, we’re adding RESS to phrases.

Best thing I can say is that the final answer is quite apt. You SEE it, don’t you? The huge flaw in the theme? The majority of these constructions merely feminize a verb, which can be seen as patronizing (not to mention boring): TEMPTRESS, WAITRESS, HUNTRESS, ACTRESS (original was a noun for this one), SEERESS. And DOUBLY damning—they often don’t even substantially alter the phrases’ meanings. Disappointing.

As such, only BUTTRESS, TRESS, and REDRESS have appeal. Note that these three are among the four shortest themers, all located around the middle of the grid. It certainly feels as if this theme would have benefited as a 15×15 grid with just those entries.

So as I conclude, I reiterate my skepticism of the whole premise of this as a 21×21 crossword. It falls so flat for me. 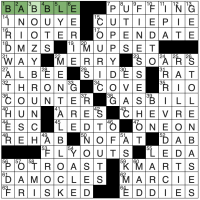 Are you all puzzled out yet? Yeah, me neither! It hasn’t happened in 40 years, so I doubt it is coming soon! Great puzzle by Peter Wentz today, who is a great themeless constructor. I have enjoyed his puzzles for years in the NYT, and this one fits right in that mold, albeit a little easier. For an LAT Saturday, it might be a tad tough, but compared to the Saturday Times or the Stumper, quite a bit easier. Lots of great stuff in here, and that made for quite an enjoyable solve. Which I have come to expect from Pete! 4.5 stars.

I will stop there! There is a new Panda Magazine coming out today, so I have things to do! 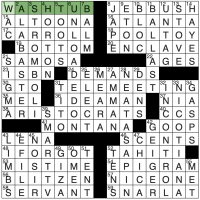 Stan has his own byline for this puzzle as opposed to a pseudonym. Usually Stan’s are a tad bit easier, but I have not found that to be the case as of late. This one I found quite tough, not in small part due to the extremely wide open areas that are not easy to get a foothold in. But another great puzzle by Stan, and I am a little worn out from this one! 4.6 stars this week.