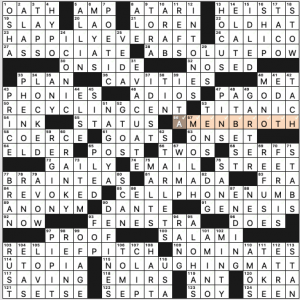 Cute theme—it made me smile a few times, and that’s a rare enough treat in Sunday-sized puzzles. As the title hints, the final “er” in various phrases is lopped off, and the resulting goofy phrase is clued accordingly:

I meandered through the puzzle untimed, off and on, and found the fill generally quite smooth. No big highlights in the fill, but no induction of scowls, either.

I didn’t figure out the theme until I got to the revealer, and it was an “oh, that” moment rather than an “aha!” moment. I enjoyed doing the puzzle. I prefer my themes to have some wordplay, especially on a Sunday. Personal taste!

I did notice that the theme answers all rhyme. 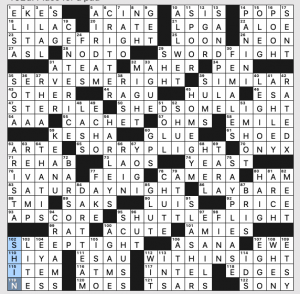 What I missed is that they all start with S, and the revealer explains: 12a [Visible … or, literally, where most inner letters of this puzzle’s eight other longest Across answers are situated]: WITHIN SIGHT. It’s clever, and I always admire the kind of mind that notices these patterns and turns them into themes.

I cut my finger yesterday when I was making chicken salad, and typing is uncomfortable, so I’ll skip straight to what I didn’t know before I did this puzzle: that LUIS Aparicio is in the Baseball Hall of Fame. I was ignorant. Aparicio was a Rookie of the Year, and MVP, and a ten-time All-Star. He was the first Venezualan-born player to be elected to the Hall of Fame.

Appropriately enough, I’m heading into Manhattan today for the first time in over six months (I typically go in once a week or so). I’m nervous to see what my favorite place in the world looks like right now.

THEME: Cities with dropped letters. Those letters, in Birnholzian fashion, spell out two other cities. 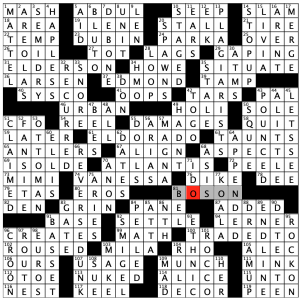 Wow. I found this puzzle to be waaay more difficult than usual!

Ironically, the only easy part for me were the two revealers, EL DORADO and ATLANTA, both of which I entered without crosses.

However, it was a welcome challenge, especially since I figured out the theme almost as soon as I read the title and had no problem with the first few Across entries. But man, I slowed down big time after that. Of course, it’s difficult when the answer being clued is not the actual answer, and that’s made more difficult when you don’t know the answer to begin with. Luckily, solvers familiar with Evan’s style can assume that the actual answer will still be acceptable crossword fill, even after the letter from the city is dropped, so that helped.

Still, I knew the answer for 23A [*World capital where Bono was born] was DUBLIN, but was having difficulty figuring out which letter to drop and still have a valid word/phrase. Reluctantly, I went with DUB IN, which, when said aloud is fine, but looks a bit strange in the grid. Same with BOSON, which seems to be a particle a physicist would be familiar with.

Being unfamiliar with a few of the cities made it tricky also. For me, those included BASEL (which I thought might be BLASE!), DURBAN, REDMOND, and LAGOS, though the last one was vaguely familiar.

The grid, as a whole, was fair, but still tricky. I got hung up on SMIGEL / MATH crossing, since SPIGEL / PATH seemed to work as well. I’m not sure if I like the trickiness of the MATH clue [Field for operators?] crossing an unfamiliar name.

Still, with the density of the theme, a very impressive grid. 13D [Copy writers?] PLAGIARISTS for the win!

SQUEE? Wasn’t that Brett Kavanaugh’s gym rat buddy from childhood that he cried about during his confirmation hearings?

THEME: Food associated with city/state sports teams rather than the cities themselves. 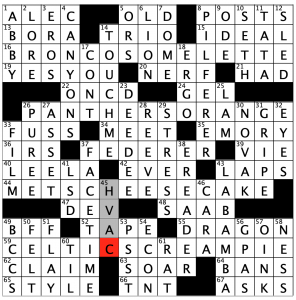 This is a novel, funky theme. I usually associate Eaton-Salners’s name with stunt puzzles, and in a way, this is sort of out there too. Just substitute the city / state food with its sports team, and there’s your answer! Simple, but still felt a bit kooky to me!

Least confidence I had when solving was the HVAC / DEV crossing. Also, I really think we should retire ON CD as acceptable fill. Other than that, I enjoyed all around. The theme answers, being the length that they were, really stole the show (as they should). Not too much room for longer, flashier fill.

Interesting theme. The letters S, T, A, and R “fall” from an upper entry to an entry immediately below it, causing crossword wackiness in both entries. All of this occurs in the Down direction. 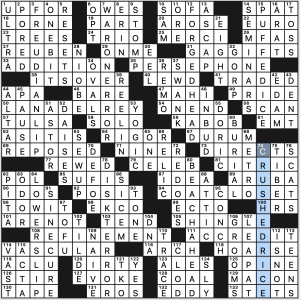 I like that the construction is very consistent. Each letter lost and gained occurs in the same position each time (at the beginning of the second word). The ERROR/TERROR entries are both on target from a cleverness/humor standpoint, however the rest aren’t quite as interesting. I’m still trying to figure out what PUFFED ICE could possibly be and what that clue means since it seems to be saying ice is a clear liquid.

Be that as it may, there seems to be a higher than average number of longer entries in this grid, and they are all at least solid if not good. I’m surprised I didn’t know LANA DEL REY [“Summertime Sadness” singer], especially given her crossword-friendly letters. And SINECURE [Undemanding job] needed a lot of crossings, but I must have crossed paths with it at some point. The funnest entries are mostly up top: GAG GIFTS, PERSEPHONE, and “IT’S OVER!”. COAT CLOSET gets honorable mention.

I’m not so keen on a partial and cross-reference rolled into one (115d ACT A / 19a PART), nor had I ever heard of APA [Style for a research paper, often (Abbr.)]. Surprisingly, this initialism stands for American Psychological Association. But given the amount of theme material and the other long fill entries, the grid is considerably cleaner than one might expect.

I like the theme and the fill here for the most part, though there are a few hiccups along the way. 3.75 stars.