This is Conrad, helping out usual blogger Laura this week. This month, we’re asked “What is the 12-letter answer hinted at by this puzzle?” Peter included this helpful instruction: “I recommend that you solve this puzzle on paper. The clues are the same in the .puz file and the pdf, but the grid looks different.”

The PDF shows a pattern of 64 white and gray squares, each 4×4 on the crossword grid. Wouldn’t you prefer a good game of chess? There are two asterisked themers:

Plus a helpful long entry:

I made a loud “whooshing” sound as I charged past the right rabbit hole, and waded into more complicated theories. Here’s one: try and move the queen and knights on the board, to see what letters they could attack: 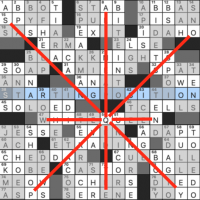 ASOWNPEY spells FAIL! I tried to apply this doomed theory to various starting points in QUEEN and KNIGHTS, plus STARTINGPOSITION. Then I put the puzzle down and watched game three of the Islanders/Lightning Stanley Cup playoff series. Upon return: I realized the PDF chessboard grid had to serve another function, since chess was already obvious. Then… STARTING POSITION. The white QUEEN always STARTs on D1 (queen on her color). 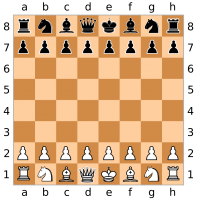 The QUEEN’s STARTING POSITION spells “CHER” on the chess board. I believe in life after love, so I raced off to finish Searching for Bobby Fischer. 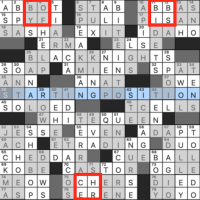 The Aha!/Doh! moment was a KAS scale 2 emotion for me, as my Muggle friends are fond of saying. I thought it was a beautifully executed meta, and the solution connected nicely to the title (and vice versa). Some probably got this meta in seconds, while others (like me) took longer. There are a lot of ways Peter could have gone with this idea, and I look forward to other takes on this theme.

Bobby Fischer lived a fascinating life. He single-handedly took on the Soviet chess machine at the height of the Cold War, battling Boris Spassky in Reykjavik, Iceland in the 1972 World Chess Championship. Fischer blundered to a loss in game one, and then forfeited game two when he didn’t show up to play. Coming back from a 2-0 deficit seemed impossible (considering most grandmaster matches end in draws). Fischer played aggressively, and opened game six with the English opening 1. c4 (he almost always opened as white with the King’s Pawn opening 1. e4). This rattled Spassky. Fischer won game six and, “The packed auditorium rose as one; a bemused, crushed Spassky joined in the applause, clapping for his opponent in recognition of the artistic creation to which he had fallen victim.”1

ABC broadcasted the matches on Wide World of Sports (with commentary provided by Larry Evans). Fischer won seven games, Spassky won three (including the forfeit), and the rest were draws. Spassky resigned after game 21, making Bobby the first American World Chess Champion since Wilhelm Steinitz in 1894. Fischer became an international celebrity, and his fame inspired a generation of players to pick up a chess board (including me). Bobby Fischer was the definition of a mad genius. He refused to defend his title in 1975, forfeiting to Anatoly Karpov. His mental illness worsened and led to dark and terrible places, including Holocaust denial and anti-Semitism. As meta solving pal Gideon told me, “To be fair, he was truly sick long before he was horrible.” The 2011 HBO documentary Bobby Fischer Against the World does a nice job detailing Bobby’s life. I think it’s a fair take and it pulls no punches.

I’ll leave you with Murry Head’s One Night in Bangkok, from the album (and subsequent musical inspired by Fischer’s cold war chess battles) CHESS.