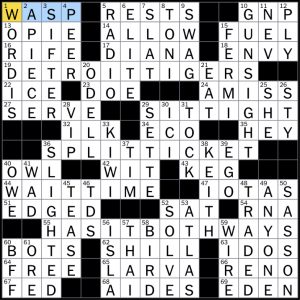 Long time no see! It’s Erin Milligan-Milburn, breaking her years-long hiatus to fill in for Jenni today. Today’s theme is about someone you may ENVY, because this person HAS IT BOTH WAYS. The theme entries contain ITTI, the word IT forwards and backwards in succession:

The theme is interesting and easy enough for a Monday, and I like how the ITTI in each themer straddles the two words instead of being split between them in some phrases and being contained in one word in others. I feel like HAVE IT BOTH WAYS is more common, but then the constructor would be working with a 14-letter entry, which has its own problems.

Thanks for letting me play today! Jenni should be back as scheduled next Monday. 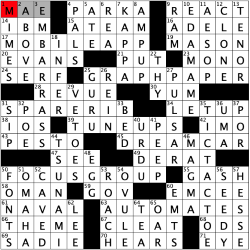 I think it took me longer to decipher the theme of this puzzle than it took me actually to solve the puzzle. The latter took me less than two minutes; the former definitely felt like more than that. Which is not to say that the theme was poorly executed in any way.

Let’s work backwards from the revealer at 63A [Streamlines, as a factory … or, when read as two words, what the beginnings of the answers to starred clues are], which is AUTOMATES. Split that into two words as the clue tells you to, and you get AUTO MATES. And when you go to the theme entries, the first word in each one forms a new word or phrase when the word AUTO is placed in front. So, those theme words are “auto mates”! Let’s see how that works for each theme entry:

The fill is fine; the only word I really couldn’t stand was DERAT. Could’ve done with at least one more word clued in a woman-friendly way. How about Linda who played Krystle Carrington on Dynasty, or Mary Ann aka George Eliot for EVANS instead of [Chris of “The Avengers” (2012)]? 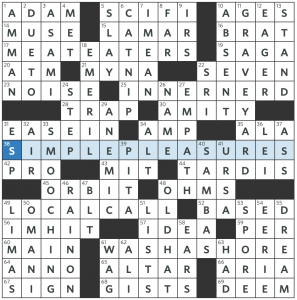 I didn’t catch on to the theme until after I finished, but that’s partly an indication of how smooth the grid is. I found the theme to be subtle yet elegant and perfectly accessible for a Monday.

In the fill, GRAVEYARD and SMOOCHING make for an interesting, but slightly disturbing pairing. OLD HAT is fun though we just saw it yesterday in the NYT. My INNER NERD is also partial to the TARDIS, SCI-FI, and EMPATH, which evokes the Star Trek character of Troi, who shows up in crosswords from time to time. 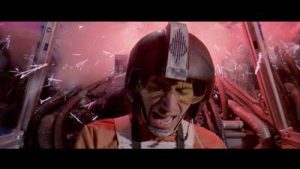 Continuing the geeky fun, my fave clue has got to be [Last words of pilot Red Four in “Star Wars”] for “I’M HIT!”. Luke Skywalker was, of course, Red Five (“Red Five, standing by”), but I’m not enough of a Star Wars geek to know that Red Four was a character by the name of John D. Branon, not one of Luke’s friends, Biggs or Wedge. Let’s just say that Red Four didn’t last very long at the Battle of Yavin.

Needless to say, I enjoyed this grid. The theme is simple but still provided a nice, little aha moment, and the fill is colorful, especially if you’re a little on the geeky side. 3.7 stars.

Hellooooo fienders. This morning we have the challenging Monday New Yorker puzzle from Elizabeth C. Gorski that was not particularly challenging for me, thought YMMV. I liked a lot of the long entries, although the fill in some places was not entirely up to the standard that I know this constructor is capable of! It did feel great to crush this puzzle, so I am willing to accept the tradeoff of fill-for-energetic-solving-experience, with the exception of one crossing that I had to run the alphabet on. Let’s dig in! 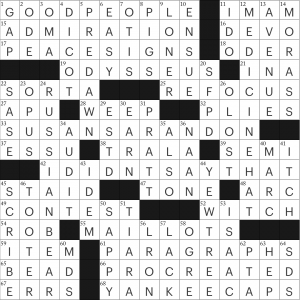 The long entries were mostly in 10-letter stacks in the NW and SE. I looooved the clue/entry combo on 1A: [An honest, moral individual] for GOOD PEOPLE. The clue went out of its way to clarify that it’s talking about one person, so we can’t miss that that is the colloquial use of GOOD PEOPLE where you refer to a single upstanding individual (as in, “You can trust her, she’s GOOD PEOPLE“). A+ for effort and execution on that fun pairing. Other long stuff included: ADMIRATION / PEACE SIGNS / PARAGRAPHS / PROCREATED / YANKEE CAPS / SUSAN SARANDON / I DIDN’T SAY THAT / RUSSIAN BEAR / MEDICINE HAT. I DIDN’T SAY THAT [“You’re misquoting me …”]  is probably my other favorite of these long entries. Although I knew RUSSIAN BEAR from previously including MISHA in a puzzle myself,  the entry may feel arbitrary to some solvers. Wikipedia tells me that RUSSIAN BEAR is a thing in itself though, sort of like saying American eagle (not the clothing store).

My main gripe with this puzzle has to do with some of the short fill, which is a little patchy. SASE is my least-favorite piece of fill, maybe of all time, so I always wince a little when I see it. There were also some inelegant partials in here, including IN A / ES SU / TRA LA (is that really a thing?). Other Fill I Could Live Without includes HEP (which, in 2020, you really only see in crosswords) / ESTD / O LOST / IDEM. This last one was my personal crossing downfall; I had no idea what letter to put at the end at the crossing with -AILLOTS. Turns out it was an M!

Overall, plenty of stars for me, with minor deductions for occasionally less-than-satisfying fill. 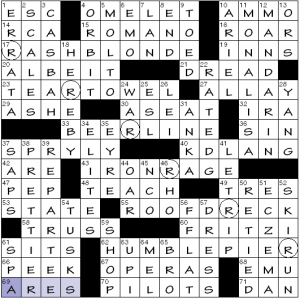 Presumably due to technical limitations, this crossword’s theme needs to be explained in a cumbersome way, parenthetically in the first theme clue.

§ I’ve taken the liberty of circling the appropriate squares §

The inserted Rs ‘glide’ three squares across (and two down) between each pair of themers. It’s a quirky little theme, yet still suitable for a Monday.