I thought about doing my whole review without vowels but I’ve already had a cocktail, so no. (A 20th Century, for those who wonder about such things). I enjoy the Vwlss Crsswrds but I never know how to review them. They have no vowels! It’s a thing! Peter offers three different versions – one with no help, one with the number of words in an answer, and one with enumerations. I did the version with no help. 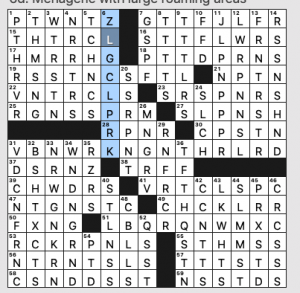 The grids always look absurd. This one has some particularly wacky-looking answers, starting with 1a: [Fall Out Boy bassist who wrote the lyrics to the 2007 hit “Thnks fr th Mmrs”], PTWNTZ (Pete Wentz). I don’t know why the song title is done without vowels when the rest of the clue has them. Commenter CC enlightened me: that’s the official name of the song. As CC points out, that makes this clue REALLY clever. Nice.

There’s also 51a [The Rio Grande flows through it]: LBQRQNWMXC, which I got through crossings and stared at for a long time before I saw ALBUQUERQUE, NEW MEXICO.

I admire the kind of mind that realizes a phrase has 15 letters if you remove the vowels. This one is 31a, [Folk tune repeatedly mentioning Dinah] –  VBNWRKNGNTHRLRD (“I’ve Been Working On The Railroad”).

I also had a bit of difficulty parsing 7a [Phrase on both a Chance and Community Chest card in Monopoly], which is GTTFJLFR. That’s “get out of Jail free” which seems obvious now but was not as I was solving. Maybe it was the cocktail.

What I didn’t know before I did this puzzle: never heard of Pete Wentz. 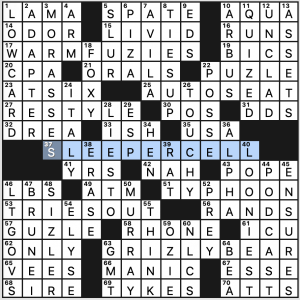 I like the concept here and enjoyed the aha moment, but in my (comic) book, sleeping is denoted with nothing less than three Zs. Perhaps the sleeper in this grid suffers from apnea.

And I must register my complaint at the entry AUTOSEAT [Golf bucket, e.g.]. “Car seat” I’ve heard, “AUTOSEAT” I have not. I’m not the arbiter of all that is crossword-worthy, and I’m no car guy, but I can’t imagine anyone comfortably using the phrase “AUTOSEAT.” And the clue is trying way too hard to be tricky referring to a bucket seat in a VW Golf, but I can’t imagine anyone calling a bucket seat a “bucket.”

Sorry if I’m seeming a little TOUCHY, but with that out of the way, we can move on to more interesting fill like LOW CARD, TYPHOON, PODCAST, and TRIES OUT. I didn’t recognize the names of actress DREA de Matteo, photographer Diane ARBUS or folk singer ELYSE Weinberg, but I’m happy to learn about them. I did know my senator, Patty MURRAY, whose resistance against this administration I’m proud to note.

Cute theme, though I feel like I was cheated out of some much-needed sleep. 3.7 stars.

It took today’s puzzle FAR longer to “click” for me that it probably should have.  I stared at the grid for at least 4 minutes after solving everything without fully getting what was going on.  In fairness, the set of answers we have for this set of clues doesn’t seem to go together: 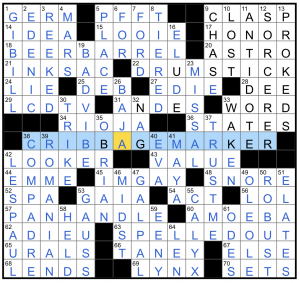 Even with the revealer, I still wasn’t fully catching what was going on:

To which my main reaction was something along the lines of “Yes!  They are spelled out!  K, e.g., L, e.g,…and then it clicked.

These all make sense when you spell everything out.  a KEG is a BEER BARREL.  To BEG is to PANHANDLE.  Etc, etc.

“Dragostei Din Tei”, best known as the “Numa Numa” song (thanks to a viral video that is now somehow 16 YEARS OLD), is a song by Moldovan band O-Zone, sung in ROMANIAN.

Divsion… that is to say [Late beloved princess’s ability to see] DI VISION.

THEME: Long words are broken up and parsed into nonsense phrases. 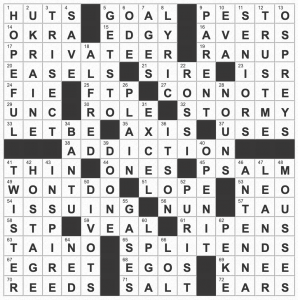 A fun, if familiar theme. I do appreciate the consistency of the answers in that they are all one-word base phrases. I’m unsure whether or not it matters where the split occurs. The revealer says SPLIT ENDS, but CONNOTE couldn’t be split more in the middle than where it is. I really don’t think the revealer was necessary at all in this puzzle. I would’ve enjoyed another themer in its place.

I was surprised that PRIVATE E.R. was clued as a wing in a hospital that one purchased so that it could solely belong to his/her person. I would’ve gone with the soldier route, but now that I think about it… good choice. I’d prefer to leave the idea of wounded military personnel out of the puzzle.

LEANDER was new for me, though it sound like an interesting myth. I would’ve assumed that the plural of MOUSSE was MOUSSE. But maybe that’s just cuz it sounds like MOOSE. And FTP was new for me also… but I can’t say that I’m smitten with that entry.

Thank goodness for the help in the clue for TAINO! 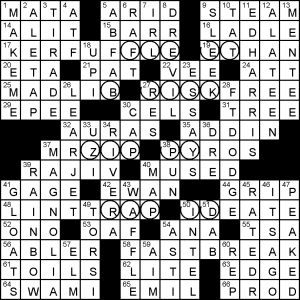 As this style of puzzle goes, we have some nice touches. FASTBREAK tells us to look for synonyms for fast on either side of black squares. We find a effervescent foursome of FLEET, BRISK, ZIPPY and RAPID.

Other notable answers include: 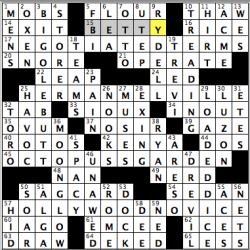 Good day, everybody! Hope all is well with you on this Thursday!

Today’s puzzle is another hard edition for a Thursday, which is, I believe, the second time in about a month that we have a relatively hard themed puzzle from BEQ. We are so used to seeing stars/asterisks at the beginning of clues to signify a theme, but in this grid, the letters to “star” need to be interpreted as the first four letters of each clue for each of the clues to make sense. Once you do so, the answers become crystal clear…well, so long as you know Ringo Starr’s surname by birth, of course!