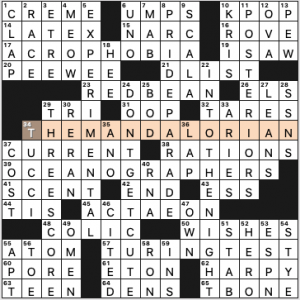 Hey, hey, hey! It’s Team Fiend writer Rachel Fabi here with a themeless as crisp and fresh as a Honeycrisp apple. There’s also a science vibe permeating this bioethicist’s grid: TRI clued as a scientific prefix, OCEANOGRAPHERS, ATOM with an interesting clue ([Subject of J. J. Thomson’s “plum pudding” model]), the TURING TEST, OVA clued well as [Monthly releases of a sort], RNA, and TOE clued with [The smallest one is called a minimus] (if you know Bob Petitto in the National Puzzlers’ League, this was a gimme).

Non-scientific highlights in the fill: K-POP, RED BEAN paste, THE MANDALORIAN (season 2 comes out next month), “DON’T GET CUTE,” PRIDE PARADE. Also nice to see Stanley TUCCI, who costars with Colin Firth in the upcoming film Supernova that looks to be a heart-wrenching one.

I have to say, I was *really* hoping today’s New Yorker was by Wyna, and I am SO EXCITED that it was! I know it’s hokey, but Wyna is my crossword soul sister, and I’m super happy to be reviewing this fantastic puzzle today. We definitely see EYE TO EYE on this one! 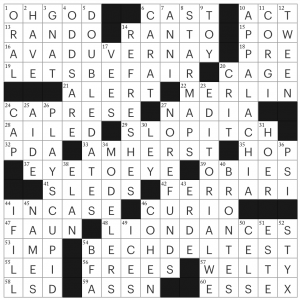 Honestly, I don’t even know where to start, there is so much to like here! AVA DUVERNAY/ LET’S BE FAIR / LION DANCES / BECHDEL TEST / DOUBLE DATES / APPALACHIA / EDITORIAL WE / PLAYS CUPID are *all* bangers.  I laughed out loud at EDITORIAL WE, which I have never heard of, but which is so obviously a thing and a fabulous entry.

Ok I could keep going forever because I adore this puzzle and Wyna, but honestly my brain is mush right now from the serotonin/repeated dopamine hits from people saying nice things about my NYT debut on the internet, so I need to stop. (And, in case you missed it, today is my NYT debut! Thanks to Amy for the kind writuep. I also have today’s USA Today puzzle and a puzzle on Matthew Stock’s Happy Little Puzzles blog, so if you want to solve more puzzles by me that are all vastly different, follow those links!).

Welcome to Crossworld, Catherine! The Email from the Inkubator team says that Catherine Cetta started constructing during quarantine, so she’s brand-spanking-new. I look forward to seeing more from her!

The title refers to a variety of anagrams for “garden.” 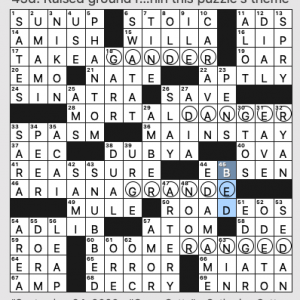 And one extra that’s sort of a revealer: 45d [Raised ground for planting vegetables or flowers within this puzzle’s theme]: BED.

This is a nice, consistent theme with all the entries solidly in the language. For once I agree with the difficulty rating – this is “lightly challenging” and was fun to solve.

What I didn’t know before I did this puzzle: that WILLA Cather wrote a book called “One of Ours.” 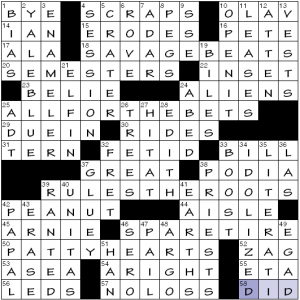 This puzzle was more of a challenge—a welcome challenge—than I’ve come to expect from Friday LAT offerings. Really had to work through and revisit some sections with diligence.

The theme is rather straightforward but it was difficult to uncover the full entries; indeed, resolving those certainly helped break open the recalcitrant areas of the grid.

Phrases ending with the bigram -ST have those letters transposed, significantly altering their meanings.

So here’s Questlove (founder (RULER?) of The ROOTS) and F. Knuckles with some arguably SAVAGE BEATS:

But of course the epitome of a “frenetic drummer” is this internet-famous guy.

… and that provides a segue to my own out.

The revealer is WATERFRONT (60a, [Harbor area, or a hint to what can precede either half of each starred answer?]). Each half of each of the other theme answers is “fronted” by “water.” 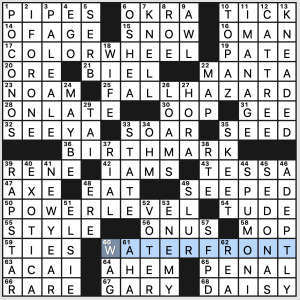 Nice theme. Maybe I’m in the minority, but I like this kind of theme and am usually surprised by the entries and how they all work together.

I’ve sure been seeing a lot of 9-letter central entries lately.  These tend to bisect the grid making it difficult for the constructor to throw in long sparkly fill. We get the usual cluster of 7s in the corners, and they’re fine—even good, at times—but they just don’t have that certain je ne sais quoi that a long juicy entry has.

But on the whole, good theme and solid fill.