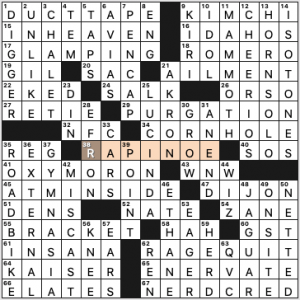 Just four more things, because those pots and pans aren’t going to wash themselves and it’s getting late: 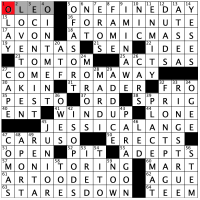 A nice 70-worder this week for the Saturday LAT challenge puzzle. Not nearly as hard as Stella Zawistowski’s offering last week, but that’s OK! They cannot all be super tough. I have done a fair amount of Craig Stowe puzzles at this point, so perhaps I get his style to a degree. This grid only has 28 black squares, which is a bit on the low side, and there are tons of long answers intertwined nicely. Great puzzle! 4.4 stars from me.

That is all! Let’s close with something I know you’re thinking about … 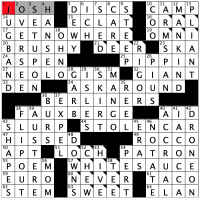 Under 12 minutes! I’ll take it! Make no mistake, this one was not easy. Note all of the error marks! The SW and SE corners fell the easiest, but the S sector has a plethora of error marks. There is a shape of about 14 squares that I had no idea how to fill. Needless to say, I wrapped this puzzle up there. Similar issues where had in the NE corner, as is also evident. But the parts that didn’t trip me up quite as bad went rather quickly, so the overall time isn’t horrible at all. Still a typical Stumper. 4.5 stars.

THEME: Phrases that end with a “parting word” 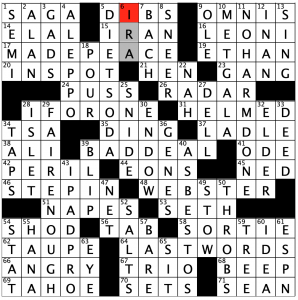 I liked this one just fine, probably because of the overall smooth grid. All the theme phrases are solidly in-language and fill like IPAD PRO and MET GALA kept in interesting. I FOR ONE took me a while to see… looks so strange in the grid to me!

Does anyone say DONE as a final word? Feels like it need’s to be I’M DONE, whereas the others stand alone. 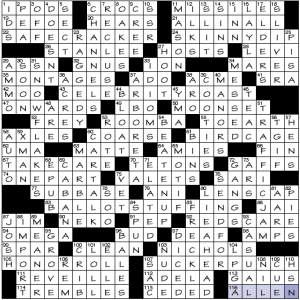 Food puns, outfitted with an occupational spin. That’s a hefty overlap in the Venn diagram of crossword themes.

Despite the well-trod nature of the theme subjects (if not this precise combination), there’s good variety and distribution of the foodstuffs: no real duplication of categories. I appreciate that kind of care in sculpting a theme.

Let’s just dive in to my video share today. It’s a long one! 35a [Film sequences] MONTAGES. Dziga Vertov’s seminal Man with a Movie Camera (Человек с киноаппаратом) is—more than 90 years on—still one of the most amazing and modern cinematic experiences. Essentially one long montage, it’s essential humanism. The version below is accompanied by the 1995 Alloy Orchestra soundtrack.

Feel as if I rambled more than usual today. Apologies if that’s a problem.