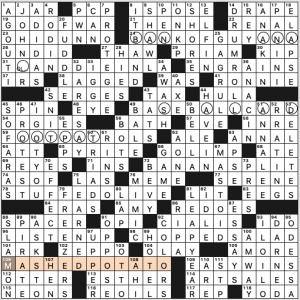 Neat theme idea, but there are some issues with the execution.

Entirely unknown to me: 20d. [State of drunken confusion], FUDDLE. Am I the only one who’s never seen this word before?

I just realized that I have yet to fulfill the challenge from last week that encourages an unlikely marriage of two different types of drink. Gimme one more week! I got this! Anyway… moving on. 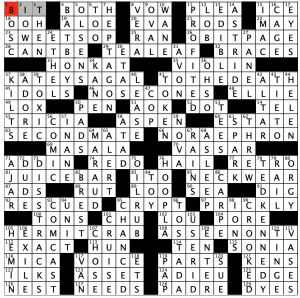 Something to note about the PDF going forward: Starting this week, the Post has made several updates to the print edition of the puzzle page. The big change is that the solution to the previous week’s puzzle has been permanently moved to another page in the magazine, which means I’ve gotten a fair amount of extra room for the clues. The clue font and the grid have been slightly enlarged (it’s still 21×21 normally, just with bigger squares) and the clue numbers are now written in bold font, which I’m hoping will make things more readable for print solvers. The title looks different in the PDF, too. Most of those things won’t affect you if you solve electronically, but you may notice some occasional longer clues since I have more space to fill out now. Give me a bigger canvas and I’ll use a bigger paintbrush.

Cool! Can’t say I really noticed all that much a difference in the cluing today as far as the length goes, but this is not something I’ll ever complain about! I always look forward to Peter Gordon puzzles as he typically includes one clue that is awkwardly and hysterically long.

Anyway, this puzzle was an atypical WaPo solve for me in that the AHA moment came after I had filled in the grid. I was 90% done when I got to the revealer, and I decided to leave that clue for last to see if I could figure out the theme without the help. Nope! While I’m accustomed to a more synergistic experience with the fill and theme helping one another out, it was still a very enjoyable solve. Just felt more like a fun themeless.

Nothing much to grumble about. SWEETSOP was new for me, and the SOP part was in the area where I was having trouble with the aforementioned SEPTAGON / BOSS issue. HEM IN is not a phrase I’ve heard before, but all in all a pleasant solve, even if the AHA came a little too late.

Enjoy this (incredible) virtual performance of the choir with which Evan regularly performs (not in this video though):

As the title suggests, the theme is movie titles changed to sound like they’re about pets. 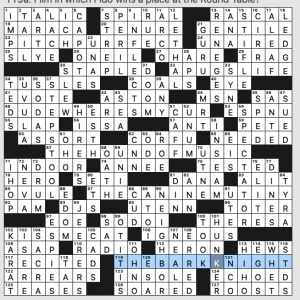 It’s a solid and consistent theme – all cats and dogs, all well-known movies of different eras and genres. It was a smidgen too easy for me, and that’s me being very very picky. Well done.

What I didn’t know before I did this puzzle: that Roy Rogers’ birth name was SLYE. Leonard Franklin Slye, to be exact.

Theme: Well-known phrases of the form x AND y are re-imagined as business names except one of the words becomes a homophone. 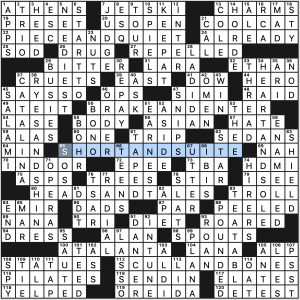 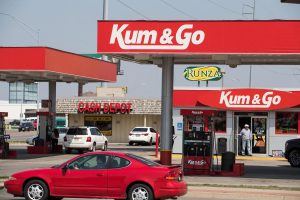 I recently saw a number of these service (ahem) stations while we were driving through Wyoming.

Despite my nits above, I love this kind of playful theme. And there are certainly plenty of business out there with punny names, so some of these almost feel real. (Just google “funniest business names” to find list upon list of them.)

In the fill I’m liking JETSKI, COOL CAT, PILATES, and especially CATALINA [California’s Santa ___ Island]. When I was a young lieutenant stationed at L.A. Air Force Station, my buddies and I decided to take up scuba diving. One of our training classes was a trip to CATALINA where we got to dive amongst the kelp forests and sea lions. Good times.

I had to look askance at TEA TABLE [Spot for an afternoon spread], but a quick google shows me it’s a real thing. But why not clue it [Spot for a spot]?