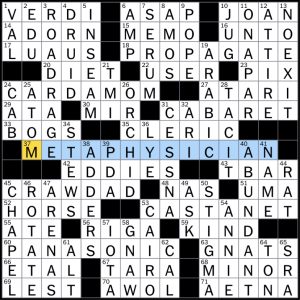 Hello, my lovelies! It’s Erin Milligan-Milburn, filling in again for Jenni. Our NYT theme for today is words that can be parsed into three-word phrases consisting of ___ A ___.

The idea is cute, but the theme set isn’t as tidy as I’d like to see it. Themes that rely on pronunciation can fall flat based on both local dialects and foreign accents. The O in CARDAMOM can be pronounced as the O in MOM, but it is usually pronounced as a schwa, so more like MUM. Also, there is only one Sonic the Hedgehog, so it seems weird to me to be criticizing A character design instead of THE character design. Having CABARET as a longer across entry was a bit confusing, too. 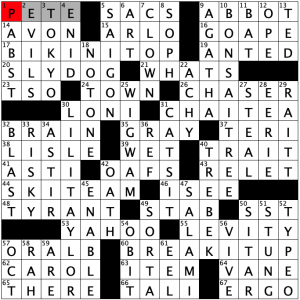 Here comes the familiar Monday pairing of Gail and Bruce with a puzzle that’s where it’s at. In this simple theme, the revealer at 60A [Stop a fight…and a hint to a literal feature of the answer to starred clues], BREAK IT UP, tells us that the word IT will be broken across the two words in each theme phrase. Like so:

Since the two theme entries at 31A and 44A are quite short at 7 letters, the stars help you pick ’em out.

This puzzle was fine. Nothing particularly memorable for either being good or bad, although I’d have clued TOKYO at 3D [Planned 2020 Olympics city] differently. I know it’s current, but IMO we’ve got enough reminders of the effects of COVID on life in every other page of the newspaper (or website). I’d prefer a little escapism in the crossword, and there are so very many other things to say about Tokyo! (This is not to say that I don’t occasionally enjoy the COVID gallows humor that has shown up in indie puzzles here and there.)

It is quite nice that there are five theme entries totaling 43 letters, not counting the revealer, in this grid yet all of the fill is accessible. That’s an achievement!

Our theme takes multi-word flower names—with one of those words also being a name of a famous person—and re-imagines the phrase as pertaining to said famous person. 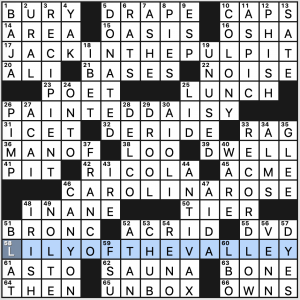 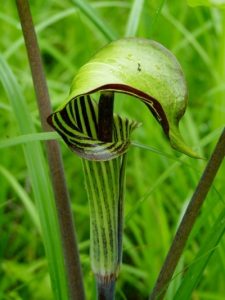 JACK IN THE PULPIT flower

The theme entries aren’t quite all consistent. Daisy, rose, and lily are all names of flowers on their own (as well as names of humans), whereas there is no flower just called a “jack” (as far as I know). But I still enjoyed the theme as it took a while for me to get that definitive aha moment with the last entry.

Still, if a solver happens to not be familiar with any one of these flowers, I can see how it might leave that solver with a feeling of indifference.

RECORD LOW, RICOLA, and ANTI-VAX are the most interesting bits of fill to me. I would be remiss if I didn’t take this moment to remind everyone how important it is to get your flu shot this year. We need to keep the flu at a manageable level so our medical professionals can focus on COVID. Plus, you just don’t want to catch the flu and start wondering if it’s actually something worse.

Nice Monday grid that took a little while to suss out. 3.5 stars.

One of my favorite things about Natan’s puzzles, which is also a thing that I think stymies a lot of his solvers, is his blend of intellectual high culture (like WALTER BENJAMIN) with pop culture minutia (like ARIANA Grande’s Christmas album). This puzzle nails that vibe, although there are some crosses that raise the challenge level to just around the edge of what we might consider “fair.” I love the grid design, and there are some *excellent* clues here, but the abundant proper noun crossings are sure to trip up many solvers (myself included!). 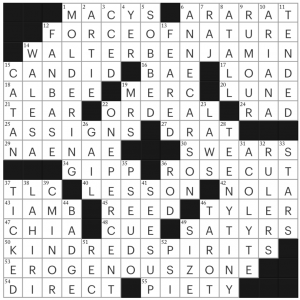 The long entries are themselves pretty great; we have FORCE OF NATURE / WALTER BENJAMIN / KINDRED SPIRITS / EROGENOUS ZONE / ONE PERCENT / ANNE CARSON / MOLDERING / TEENY TINY. I particularly love FORCE OF NATURE and EROGENOUS ZONE [and, just fyi, every time I have typed that word out in this post, I have had to correct it from “erogenous zoon,” which, honestly, maybe we should just roll with because that’s hilarious??].

I was *thoroughly* stymied in the N section of the grid. I didn’t know WALTER BENJAMIN, so its crossings with ARTIE + YER + CC’ED + ANNE CARSON + RAJ were all challenges. I knew WALESA, but I can see that giving some solvers a hard time as well. I especially struggled with CC’ED and YER crossing MACY’S and WALTER BENJAMIN because the clues were just not working for me. I had MALLS for [Setting of David Sedaris’s “Santaland Diaries”] which admittedly doesn’t actually suggest a plural, and the clue on CC’ED [In the blast radius?] just stretches the concept of cc’ing someone on an email a little too far. It has to be an *angry* email for a person who is CC’ED to be in the blast radius, you know? Unless there is some other meaning of blast radius I am missing? OH. Like an email blast. Ehhhhh now I think we are maybe stretching the meaning of the word “radius”! Idk, this clue didn’t work for me and made that section so much harder! The S half of the grid fell muchhh more quickly and felt a lot more fun to me.

Overall, despite the significant challenge in the north of the grid, this was a satisfying and crunchy solve. Lots of stars from me! 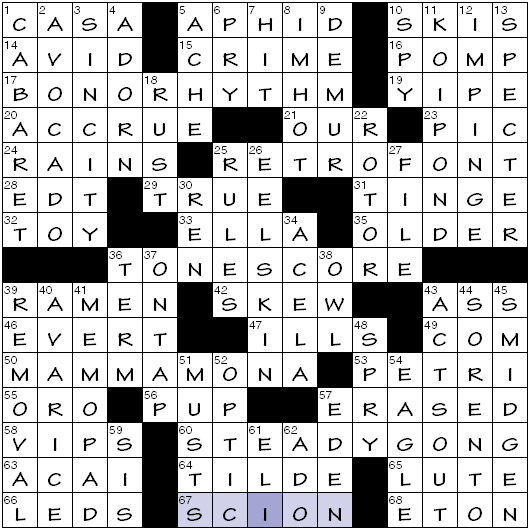 Theme here is that the letter I has been exchanged for the letters ON to create wacky phrases.

On to the themers:

These are … okay, but nothing special. And since I wasn’t exactly impressed with the overall theme conceit, the individual entries would have to have been exceptionally good for me to feel more warmly about the crossword. 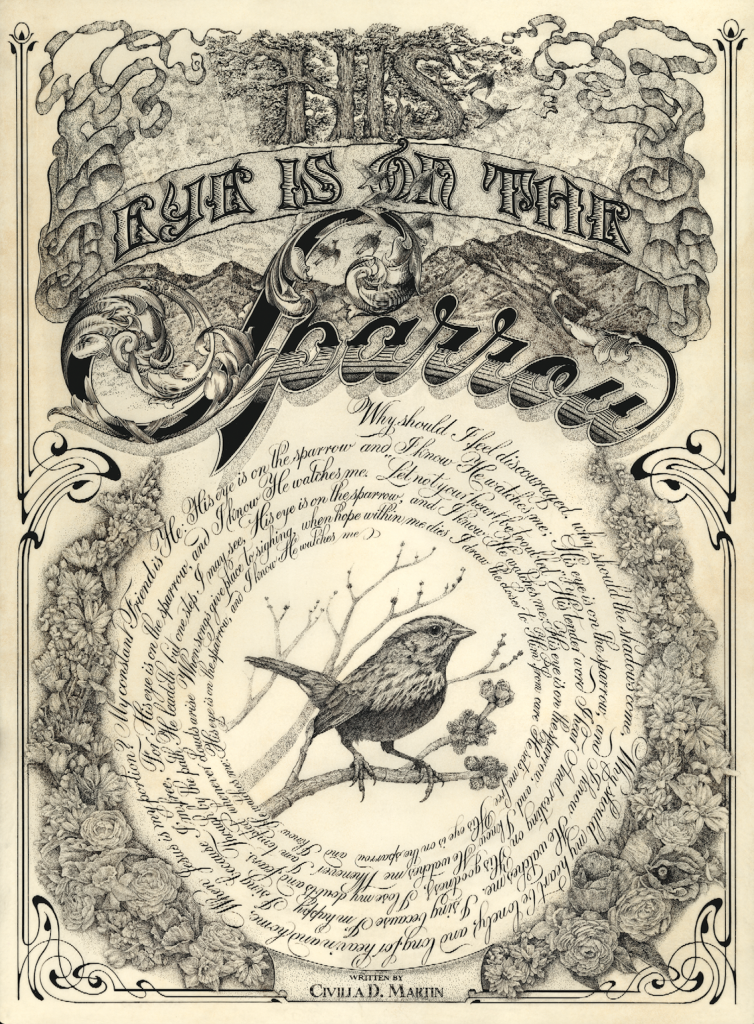 Let’s see what else we have.