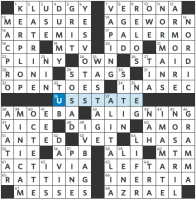 This week, we’re looking for a 36-Across. What’s a 36-Across? About seven letters.

And what is it surrounded by? I had a feeling that we were looking for more US STATEs, so I poked around for a bit, and finally found them … turns out, the entries around the borders of the grid begin and end with the letters of state abbreviations (one might say they are “surrounded”):

What US STATE is “surrounded” by KY, VA, NC, GA, AL, MS, AR, and MO? Why, that would be TENNESSEE, which is a 36-Across and our answer. I’m sure there are trivia-type folks who know off the tops of their heads which landlocked state is surrounded by the most other landlocked states — <checks map> looks like it is indeed TN, since runners-up AR, WY, and CO are surrounded by seven other states — and which one is surrounded by the fewest (looks like NV if we’re defining “landlocked” as a state that doesn’t touch an ocean or an international border, but when DC gains statehood it will win).