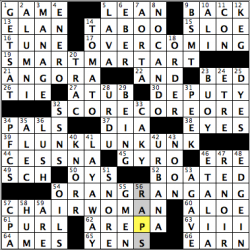 Good day, everyone! Here is hoping all is well with you as October fast approaches!

Though it was eminently gettable with its crossings, I had not ever come across AREPA until today, though, judging by its clue, is something I definitely would not mind trying out (62A: [Colombian cornmeal cake]). If that cake is not your taste, maybe the ones mentioned in the clue for CAKY is more down your alley (33D: [Like some brownies]). Didn’t really notice the hyper similarities with the entry CAKY and the word “cake” in the AREPA clue, but those sort of things don’t really bother me when solving. One of these days, I am going to walk into a LUSH store and quench my curiosity about natural soaps and oils that the store sells (36D: [Abounding in foliage]). Really liked the fill of the paralleling answers NO CAN DO (8D: [“Ain’t gonna happen!”]) and LAWAWAY (41D: [“Buy now, pay later” plan name]). Is layaway still a thing people do when shopping? Does anyone store offer that option?

“Sports will make you smarter” moment of the day: KEG (12D: [Beer barrel]) – If one follows college football long enough, you’ll come across some interesting trophies awarded to schools who win games against a hated rival. In the rivalry game between the University of Louisville and the University of Cincinnati, the winner of the football game wins the Keg of Nails. The story goes that fraternity chapters at both schools founded the trophy to signify the winning team having to be as tough as nails. The rivalry has not been played since 2013 because of Louisville’s move to the Atlantic Coast Conference (both Louisville and Cincinnati used to be in Conference USA and the Big East Conference together), but here is hoping game gets renewed sometime soon. Oh, and here’s the keg… 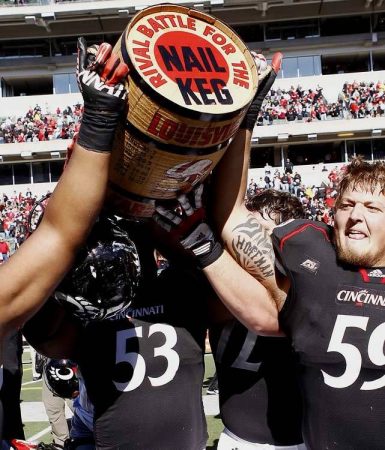 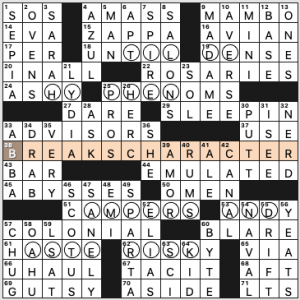 Cute theme. A term I learned from Saturday Night Live write-ups, BREAKS CHARACTER, is reinterpreted as text characters being broken. (For me, Tim Conway as the numb dentist on The Carol Burnett Show is the highlight of the video compilation below.) There’s a TILDE “broken,” or split across two entries in row 3, UNTIL and DENSE. Row 5 has a broken HYPHEN spanning ASHY and PHENOMS. Row 11 has CAMPERS and ANDY hiding AMPERSAND, and row 13 gives us HASTE and RISKY for an ASTERISK.

This theme offers the constructor a lot of flexibility. For instance, the ASTERISK could be also broken between WASTE, BASTE, or CASTE and RISKS, and that CAMPERS could be HAMPERS, PAMPERS, or DAMPERS. Overall the fill is quite smooth, with space for 12 non-theme entries in the 6- to 8-letter range.

3.75 stars from me. Might have been nice for the puzzle to feel a little more themed, if you get what I’m saying. “Words split across two unrelated words” doesn’t feel super themey to the solver. 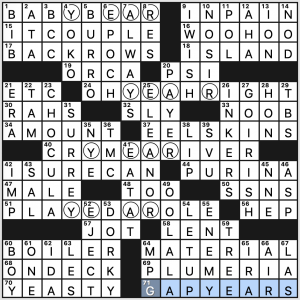 Very timely theme. According to surveys, an unprecedented number of students are taking GAP YEARS this year (for obvious reasons). My son is a junior at Univ. of Denver and he decided to stick it out. Cases on campus are on the rise recently, but he’s living off campus in an apartment with one other guy, so he’s in about as good a situation as he could be in.

Interesting construction with theme entries at 1a and 71a. That forces additional 8-letter entries in those corners, but it’s clear they’re not thematic since they lack the circles.

I think I would have been okay without that first themer though. Since there are only three possible configurations for the gap placement, it would feel more elegant to me if we only had three actual theme entries. But BABY BEAR is a fun entry and the corners are filled well with IT COUPLE and PLUMERIA.

Favorite fill has to go to Count CHOCULA, “I SURE CAN,” and “GO IRISH!” [Notre Dame cheer]. I’m also liking that stack of WOOHOO on ISLAND in the NE. If you ever played Wii Sports back in the day when it was the in thing, you may recall the setting for the game was a resort called Wuhu Island.

THEME: The word PAGE is mixed in common phrases. 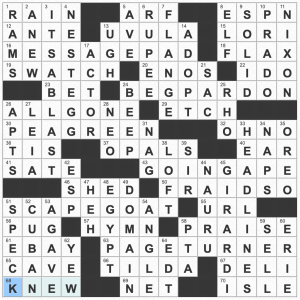 I’m just realizing how many theme answers there are in this puzzle! Usually that would stick out solely because of the strain it puts on the grid, which often results in cruddy fill. Not this time! Sure, nothing jumps out as super-snazzy in the fill, but nothing that makes me go UGH either.

Solid themers. Especially like BEG PARDON. MESSAGE PAD, to me, sounds very old-fashioned, but I think I’ve heard the term before.

Of course, I feel compelled, as always, to point out that this puzzle should be employing circled letters rather than asking its solvers to count the letters themselves. It didn’t bother me that much as a solver, but imagine you’re a novice and you haven’t quite grokked how themes work in crosswords… it could really help if those circles were there. I hear a fix is on the horizon though. Hopefully soon! 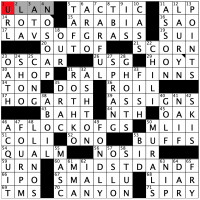 This was puzzle #666 in the Jonesin’ series, and it is from March of 2014. This is quite a feat of construction. The E’s in the title hint at what is going on: the theme answers are phrases that have their E’s removed:

But that is not all! There are also 21 clues, if I counted correctly, that only read correctly if THEIR E’s are removed. And to keep the puzzle truly full of E’s, there are NONE in the completed grid either! I have a couple of error marks in the grid: One was just a brain fart, and the other is where I tried to misspell LAURYN Hill’s name … with an E! A GREAT puzzle, and I am not surprised this was chosen as one of the best of the previous 1,000. 4.8 stars for a masterpiece!

Instead of interesting clues, here is a smattering of what I thought were some of the best clues that needed E’s removed to make sense. Enjoy!

I will stop there! Hope you enjoyed this retro Jonesin’ puzzle this week! 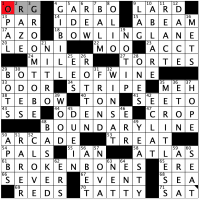 This is not a byline I come across too often, but I do recognize it. This Tuesday’s puzzle has the trademark revealer at 61A:

Fun! As you can clearly see, the phrases all start with BO and end with NE, thus “breaking” a bone. Just right for a Tuesday. 4.3 stars.