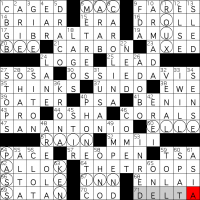 hello and welcome to episode #643 of matt gaffney’s weekly crossword contest, “Listen Till the End”. for this week 4 puzzle, the instructions tell us that we are looking for a 10-letter word I hope you’ve heard of. what are the theme answers? well, there are four longish across answers in the grid, and one of them has an explicitly relevant parenthetical note in the clue:

the hint about pronunciation, combined with both “heard” in the instructions and “listen” in the title, certainly suggests a phonetic mechanism. but how does it work?

well, my first thought was naturally the pronunciation of GIBRALTAR, specifically the end of it (based on the title). this could be ALTAR or ALTER, so i went looking for anything in the grid or clues that might suggest either of those two words, but i didn’t find anything promising.

my next thought: some of these theme clues seem deliberately ambiguous—especially {Noted strait} and {Texas city}, which don’t do anything to pin the answer among a very large list of possibilities. could this be one of those puzzles where we’re supposed to think of other answers that might satisfy those clues?

yes, yes it could. since i couldn’t plausibly go looking for the name of any strait in the world, or any texas city, i thought about OSSIE DAVIS and do the right thing; his wife and frequent co-star RUBY DEE is also in that film. and wouldn’t you know it, but {Flour and lard, say} ROUX and {Queen or drone, say} BEE are both in the grid. no DEE, though—this could be why the title directs our attention to the “end”.

taking another look, both of those clues for ROUX and BEE are weird. normally the “comma say” at the end of a clue is basically synonymous with “for example” or “e.g.”—although a little more flexible, in that it can clue any part of speech, whereas “for example” and “e.g.” really ought to be used only for nouns. as such, a clue in the form {X and Y, say} typically clues a plural noun, rather than ROUX as we have here. however, the fact that both of them ended with “, say” caused me to go looking for other clues in that form. wouldn’t you know it—there are eight of them in the puzzle:

these eight answers can be paired together phonetically to form the first two syllables of a three-syllable alternate answer to each of the four theme clues:

the four missing ending syllables are AW + DEE + O + FILE, which phonetically combine to form AUDIOPHILE, an apt ten-letter word (that i have, indeed, heard of!).

there are some things i liked very much about this meta. the mechanism, while it relies on a somewhat familiar alternative-answers-to-theme-clues idea, feels quite fresh, phonetically combining syllables from all over the grid. subverting the “, say” convention of crossword cluing in service of a phonetic meta is nothing short of genius. i do wish the theme answers and clues had been somewhat tighter than they were—{Noted strait} is particularly inelegant in that regard, and i wish more of them had been chosen from somewhat limited answer spaces like the OSSIE DAVIS / RUBY DEE pair.

more than that, though, i’m both bothered and genuinely surprised at the choice of RAIN. does matt pronounce this word differently from me? or pronounce RANK differently? i am simply baffled. i have to think that RANG wouldn’t have been appreciably harder than RAIN to jam into the grid somewhere, clued along the lines of {Sounded from a steeple, say} or {Played a clip from a song, say} or even something saucy like {Went off in one’s pants, say}. i think that would have improved the meta quite a bit. i’ve done puzzles where you have to play fast and loose with pronunciation to get one thing to sound like another, and i don’t mind that if it’s clear that’s what we’re supposed to be doing, but here, every other syllable was an exact phonetic match, so RAIN stuck out like a wet thumb.

(i am totally unbothered by the elision of the D in RANK AND FILE. i don’t pronounce it at all when i’m saying that phrase. i’m not sure i would pronounce the vowel sound in AND exactly like the vowel in KEN, either, but it’s an unstressed syllable in the context of RANK AND FILE. so it’s a schwa anyway and basically impossible to really make a distinction.)

that’s all i’ve got this week. what’d you think of this one?