This took me a few good minutes of post-solve cogitation to really understand what was going on here.

The theme entries consist of well-known phrases except that a portion of one word is replaced with a homophonic letter which is then clued as if it was a letter grade (A-D—no F, hence the title). 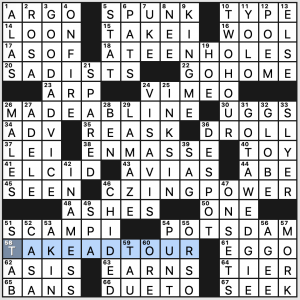 Consistency is the problem here. If all four entries had been of the same structure as the B and D entries, that would have reduced the confusion immensely. As it is, the A and C entries disrupt the flow and make it unduly hard for the solver to get the theme.

Moving to the fill, and in keeping with the school theme, we have a TWO-HOUR weather delay (ah, the good ol’ days), and we GOT A WEDGIE by some pranksters. Pranksters? Bullies, is the more appropriate word, I think. Elsewhere, I liked GOOD ADVICE, “KING ME,” “GO HOME,” ON FIRE, and the VIS-A-VIS / EN MASSE crossing in the center of the grid.

In sum, two of the theme answers felt unusually awkward, making the theme feel off-balanced. I like the idea though. Three stars. 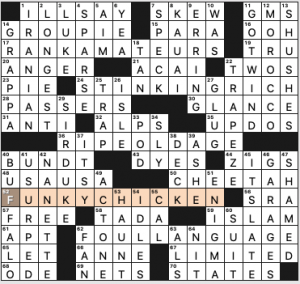 Hey, look at that! Despite being unable to crack into the northwest corner with the Across clues and having to back into it later, I still solved in a faster-than-usual (for me) Wednesday time—despite the grid having an extra column to fill in. It helped that I entered the fourth themer with zero crossings.

The puzzle is a good antidote for the headachy vibe from the (unilaterally) shouty debate I watched tonight. The theme revealer is 62a. [Profanity … or what 17-, 24-, 36- and 52-Across start with?], FOUL LANGUAGE, and there are synonyms of “foul” at the starts of the themers, but with different meanings in the theme phrases:

I’m often irked by grids like this for mid-week puzzles, with those open corners accommodating 16 7-letter entries. But you can trust Andy and Erik to do right by a grid, because they’re both exceptionally talented. This grid is smooth, y’all! And it’s made space for crisp entries like SIR DUKE, SHUSHES, and GOT WIND.

Hello! I’m still in a terrible mood after the televised embarrassment that was last night’s “debate,” so this will probably be pretty brief. I enjoyed the solve right up until I finished with an error and had to spend another minute or so hunting it down! 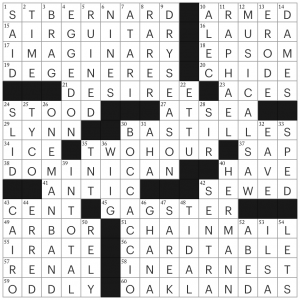 The long entries today included NW and SE stacks and two long downs: ST BERNARD / AIR GUITAR / IMAGINARY / DEGENERES / CHAINMAIL / CARD TABLE / IN EARNEST / OAKLAND A’S / ONE MAN BAND / MUSICAL SAW. I loved the clue on AIR GUITAR [It’s nothing to play with?] and enjoyed the mental image of a ONE MAN BAND playing a MUSICAL SAW [Sharp instrument?]. I (truly!) regret to inform you that Ellen DEGENERES is mean and apparently created a toxic work environment on her show. I wish it weren’t so.

Overall, this was a fun puzz but I am still in a bad mood, which is not the puzzle’s fault. It’s probably very good and deserves many stars! 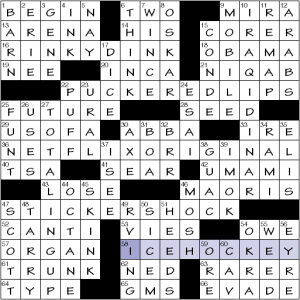 Only a minimal write-up today, as there’s much else for me to do today. 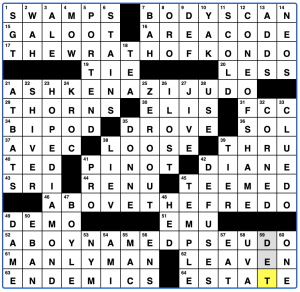 This week’s AVCX is from BEQ, who I feel like it’s been a minute since we’ve seen a puzzle from him in this venue.  “Knead a New Ending” has a 3/5 on the AVCX difficulty scale, and when I first saw this grid, I almost expected a themeless from the square pattern.  What’s actually going on under the hood is a nice twist on a standard crossword theme idea:

All of these entries are standard titles/phrases (THE WRATH OF KHAN, ASHKENAZI JEW, ABOVE THE FREY, A BOY NAMED SUE) with the extra phonetic “dough”, er, DO, we need added onto the end to make some more out-there phrases.

One of BEQ’s other gigs, the Boston Typewriter Orchestra, has a new album out! I always dig their performances. 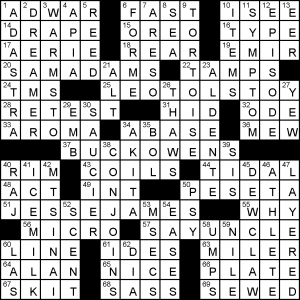 It’s weird how this puzzle assumes you are one-hundred percent conversant with three pop culture references from circa 1990. First off, the theme – SAYUNCLE suggests each of the four people shares a name with a famous “Uncle ___”. This is a reasonable conceit. But assuming the majority of your audience are familiar with a secondary Seinfeld character, a reasonably successful (but cringy) 80’s film and a nickname of a Full House character is is a reach. I “got” the three references, but none of them seem as iconic as “Uncle Sam”. I’m guessing the problem is the other options in the same tier are Ben and Tom, and both were nixed for quite obvious reasons. This to me is a reasonable theme idea, but one that lacked enough options to be viable.

Favourite answer today: DEWCLAW. I see some doozies, ones that curl in on themselves like a ram’s horn. I almost feel I should starting mounting them on my wall!