I was surprised when I finished and looked at the timer. I thought this took a lot longer. There were several spots that seemed to stump me, especially the NE corner.

There was a lot to like in this puzzle. 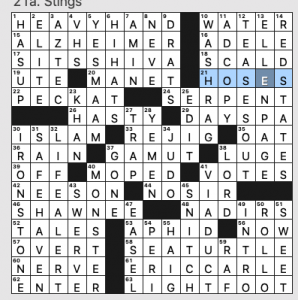 What I didn’t know before I did this puzzle: I’d never head the Warren Buffett quote, and I didn’t know that fasting during Ramadan is sawm.

*Yes, I have political opinions and yes, it is appropriate to write about them here. If you don’t like opinions with your crosswords, go somewhere else or start your own blog. This blog has an editorial stance. We believe that all people deserve safety, decent healthcare, nutrition, housing, and freedom. By “freedom” we mean the ability to live our lives without fear of police brutality, economic discrimination, and other oppressions no matter our age, race, gender, sexual orientation, or immigrant status. We know that systemic racism, misogyny, homophobia, nativism, and plutocracy threaten those values. We recognize that the current administration is responsible for tens of thousands of deaths and that the decades-long effort to undo the New Deal has led us to an unthinking acceptance of terrible compromises.

If you think that we are inappropriately injecting politics into your life, you are speaking from a place of immense privilege. Those of us who live in marginalized bodies and threatened communities are aware that every decision made by White people in power reinforces a racist status quo. That includes decisions about what appears in crossword puzzles. This shit doesn’t happen in a vacuum. The cruciverbal is political. It is ironic, to say the least, that when we speak up about oppression, you whine about having your leisure taken away. It’s not a good look. Just stop.

Today’s NYT had a theme that I’m surprised I haven’t seen before (that doesn’t mean it hasn’t happened, just that I haven’t seen it).  Adam Fromm’s grid had some fun with rebus squares, both across and down: 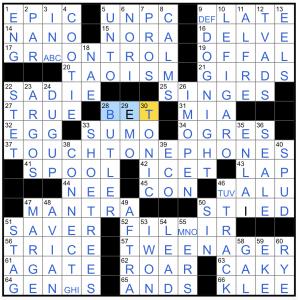 An entry across the middle of the grid spells it all out:

Yes, TOUCH TONE PHONES, which made their debut for consumers at the 1962 World’s Fair.  Each rebus square has a touch tone phone number going down, and the three letters associated with that key going across.

I leave it there.  Phones!

Did you PASS NOTES [Furtively communicate in class, or what you need to do seven times in this puzzle] back in your school days? I wonder what the virtual school equivalent is now. Texting, I presume.

I didn’t catch on to the theme until I was stuck in the SW. I had to make the active decision to understand it in order to make progress and complete the grid. Each theme answer has one of the standard musical notes in it, though you have to “pass” it (i.e. mentally eliminate it) to have the remaining word match the clue. 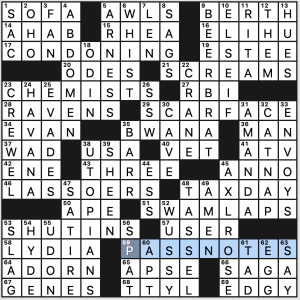 Cute theme. As I said, I was at a standstill in the SW thanks to a (slightly unfair) cluster of ? clues. That was when I made the decision to figure out the theme. It’s nice when a theme does exactly what it’s supposed to do and helps the solver come unstuck.

Top fill for me: AXL ROSE, CATNAP, and BEER BRAT [Oktoberfest sausage]. Near as I can tell, the BEER BRAT is an American thing coming first out of Wisconsin. But of course, Oktoberfest is celebrated here in the U.S. as well.

It was a CREWEL joke to have that word’s first and last letters be part of theme answers, but I must have heard of it somewhere because my first guesses were correct. Also, not a fan of  WUSSY (or its noun form “wuss”) because of the bullying vibe it gives off.

I like a theme that seems inscrutable at first, but then becomes all clear post-aha moment. This fits the bill. 3.75 stars. 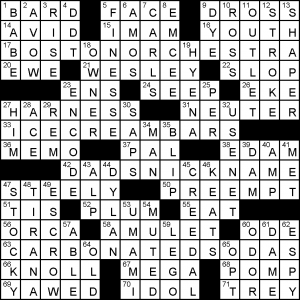 Today features a pretty basic “clue reversal” theme, with four long answers clued as [Pops]. The wrinkle is that BOSTONORCHESTRA and DADSNICKNAME are singular, whereas ICECREAMBARS and CARBONATEDSODAS are plural. One further nit – isn’t a SODA by definition carbonated, making the phrase tautological?

As previously noted, four spanning entries tends to make for a grid without a lot of room for “playfulness” in the non-theme entries. The shorter entries actually hold up well here, but the compromise comes in longer phrases being entries like SHAPER and CREEDAL rather than colourful phrases. 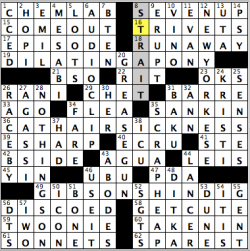 Good day, everybody! Hope all is well with you and you have all of your fall clothing lined up and ready to go!

We have some fun playing with our words today, and each of the three theme entries is a pun where a known phrase or popular noun is altered by adding letters into it when, spelled out, also is a word that is an actual language. A couple of the original phrases/nouns are not so common, at least in my mind, so seeing the a-ha moment might cause some mixed feelings for some — especially those not as well-versed in music and music history.