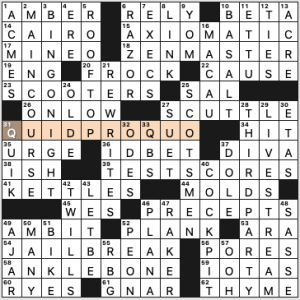 I think it’s been months since I finished an NYT Friday in under 4 minutes. While 3d stymied me for a while, a lot of the other answers just rolled right into place. Aah!

The grid’s technically a pangram, using each letter of the alphabet at least once, but Debbie hasn’t jammed in an excess of the rarer letters so it didn’t scream “look at me, I’m a pangram!” Lots of zippy entries here. We’ve got ZEN MASTER, SCOOTERS (rental scooters are all over my neighborhood now; I haven’t tried one because I’m afraid I would crash and break myself), the great verb SCUTTLE, QUID PRO QUO (we all have the same reference point for that now, don’t we?), TEST SCORES (which many colleges are not requiring for applicants this year, and when they discover they can assemble a great class of incoming students without them, will SAT/ACT hegemony wither away?), PRECEPTS like honesty and kindness, JAILBREAKing a phone, BINGO NIGHT, THIRD PARTY (nice example, the Socialists!), and LIVESTREAM.

Least favorite part of the puzzle: 36a. [“Seems likely”], “I’D BET.” Feels like an awkward entry to me. Would be better clued via fill-in-the-blank, something like [“___ my last dollar”].

Four stars from me. TGIF!

Gooddddd morning, team! I’m always excited to see Robyn’s name in the byline because she never fails to deliver smooth, high-quality grids and fun, accessible clues. These lightly challenging Friday puzzles are the perfect showcase for Robyn’s talents, and this puzzle was no exception. 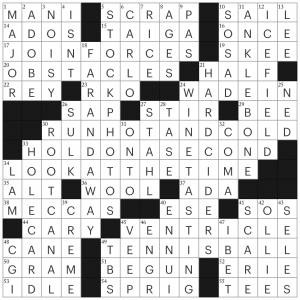 The long stuff today includes a staircase of RUN HOT AND COLD / HOLD ON A SECOND / LOOK AT THE TIME, as well as some longish downs like FAR AND AWAY / STOCK PHOTOS / WINE TASTING / HARD CIDERS. All good, but I particularly love the staircase, which is colloquial AF, and all given pitch-perfect clues.

Overall, all the stars from me. This is a perfect example of how to make an easy themeless that is accessible without sacrificing fun/exciting clues and entries.

I really really wanted to love this puzzle. The cluing is challenging without being obscure or unfair and some of the entries really sparkle. As we’ve come to expect from the Inkbuator team, the grid and the clues are full of female energy. I really wanted to love it. Unfortunately, the center of the grid got in my way.

Let’s start with the good stuff: 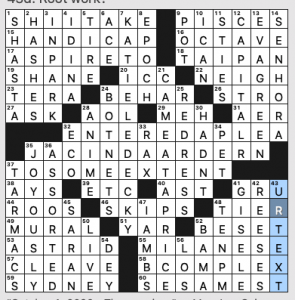 If you have to resort to [___ Roast Beef (sandwich chain found in BRAXTON)] to clue RAX, you have a problem. I’m not opposed to cryptic-ish clues in straight crosswords. This is more along the lines of [Title fish character (OMEN spelled backwards] (and yes, I did once see that clue in the execrable puzzle our local paper runs). I suspect this happened because the A in RAX crosses JACINDA ARDERN. I was delighted to learn that she was the second elected head of government to give birth while in office. I knew her first name but could not have accurately spelled her last name. That center stack is terrific – PM Ardern sits between ENTERED A PLEA and TO SOME EXTENT – and even I can see that there was no way to change it without scrapping the whole grid. I’d never heard of RAX Roast Beef, which is a regional fast food chain in the midwest and southeast of the US. In their heyday they apparently had outposts in Guatemala and Alberta, Canada. Their heyday was 30 years ago. So yeah, I needed the help and yeah, it still bugged me.

Mary Lou gives us another clue in that format at 51a: [“Star Trek: The Next Generation” character Tasha (in LANYARD)], YAR. I still don’t like it.

Overall I still enjoyed the puzzle, and as promised it was more challenging than most Inkubator offerings. I really appreciate the way they vary the difficulty level.

What I didn’t know before I did this puzzle: see above re: RAX. I also did not know that TAIPAN means “big shot.” 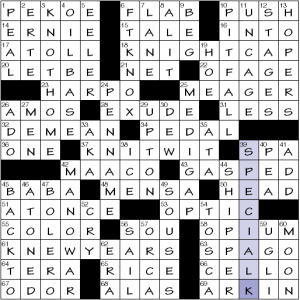 Another minimal write-up from me today. No slight intended to the constructor.

Theme: Dances are found in the circled letters on the outer edges of well-known phrases. 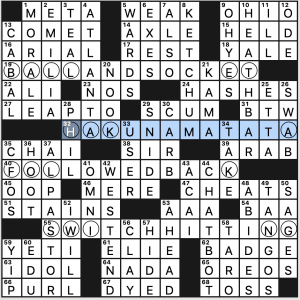 Nice theme, and I especially liked the haka/HAKUNA MATATA combo. That entry made me think of the hula and I found that HUGH MASEKELA (the South African trumpeter) would fit in the grid.  Can you think of any other potential entries? I’m surprised to find TANGOS at 49d which seems like it has potential as a theme answer.

In the fill, the highlights include the show ATLANTA, Ash KETCHUM of Pokemon fame, HEATH BAR, the WEST END, and a CHAT-BOT. I struggled with the last letter of AL PASTOR [Pork taco style] which crossed PURL [2018 Pixar short whose title is a knitting term]. Thankfully I barely remembered both terms enough to get the R, though I admit I tried an L first. The Pixar short is definitely worth a viewing for its take on contending with office bro culture.