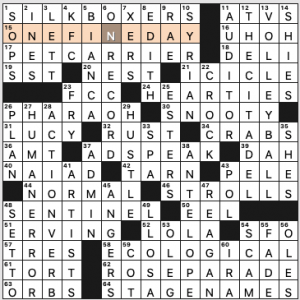 I’m distracted. Between Twitter and the news and also the second episode of the new season of Great British Bake Off (thanks to Brad for the hot tip that there was a new season!), I am without focus. I liked the puzzle … a half hour ago. And now I barely remember it. Let me refresh my memory! Ah, yes. A glance at the puzzle is always helpful.

With ONEF filled in already, I confess to you that I read 15a. [When “the arms I long for will open wide,” in a 1963 top 5 hit] and filled in ONE FIFTEEN, thinking it was some weird hands-of-a-clock thing. Urp. It’s ONE FINE DAY. Please tell us one of your goofiest wrong answer attempts.

I noticed a nice, inclusive vibe in this crossword. Fictional LUCY from Peanuts and BIANCA from Shakespeare, PELE, Julius “Dr. J” ERVING, LOLA Falana, Elton John and Lady Gaga in the STAGE NAMES clue (Reginald Dwight and Stefania Germanotta, respectively), INES Di Santo, EDITH Wharton (what academic word came to mind for that [Wharton, for one] clue?), Issa RAE. On the “straight men of European descent” side, we have REAGAN and possibly Mario Vargas LLOSA (his mom was of Spanish descent, not sure about his dad). Good job, gentlemen!

3.8 stars from me. Would’ve been over 4 without LETT, TARN, and ESTERS. 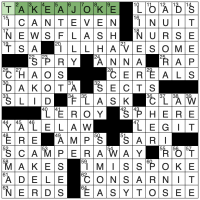 This one put up a little more resistance than normal! This is a fine 70-worder by Evan, who I don’t think I have had the pleasure of meeting at the ACPT. I have solved several of his puzzles at this point, and they area all of fine quality. Lots of fun stuff in this one, including several casual phrases, which I love! A good warmup to the Boswords Crosswords League, which I think starts this Monday! 4.3 stars for this one.

Some of the fun stuff:

That is all! Happy puzzling! 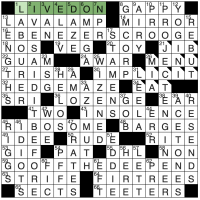 I had a really slow start with this week’s Stumper. The lower end fell first, then the NW corner, and I finally finished in the upper left area, where all of the error marks are! This one was thorny in spots. I still think I need a vacation to reset the brain. I have been back to running in the last couple of weeks, and I feel a tad better now that I have lost a few pounds. Perhaps that can continue during this crazy isolation/quarantine period that appears to be the norm for the next several months. Even a home-body like myself is ready to go SOMEWHERE, but there aren’t many places to go, and the virus seems to be kicking up steam where I live, so let’s all hang in there! Do a puzzle or two to save your sanity! 4.5 stars for this one, which I hope you enjoyed as much as I did. 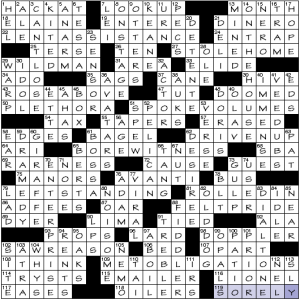 Phrases featuring past participles that are homonyms of nouns are treated as if they were in fact nouns.

This puzzle felt bigger than it is.

Not part of the theme: 81a [Arrive casually] ROLLED IN. Not a homonym of a noun, and I’m just now realizing that all the thematic past participles are irregular.

Relatively quick tour around the rest of the grid, as there are still Many Things Going On.