I thought I recognized the byline, but the McIntyre in the database is a Patrick McIntyre. This appears to be Andrew McIntyre’s debut. Congrats! Any relation?

I would be surprised if this theme hadn’t been done before, but it was still pretty cool to solve, despite not knowing two of the three names for THE BIG DIPPER (21d, [Current name for the arrangement of the O’s in this puzzle]).

The other two theme answers have the same clue [Old name for the arrangement of the O’s in this puzzle], and they are THE SEVEN OXEN and THE GREAT WAGON. A quick google of those terms doesn’t net me the history of those names, so if anyone has more knowledge on them, please share in the comments. 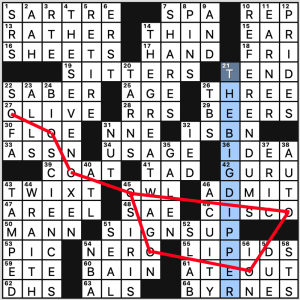 The O’s in the grid are roughly in the shape that we all should recognize.* Given that two of the theme answers each has an O, the grid’s constellation shape is strictly limited. While it doesn’t quite look to scale, I’d say it’s pretty darn close, given this restriction.

Often, when such a common letter is limited in number in the grid, that means the fill will suffer notably. And there is a fairly high amount of crosswordese like RRS, STS, RTE, SRS, AAH, ERST, ASSN, ISBN, ETE, SAE, TARNS, and AREEL, but none of this really bothered me too much. I was more concerned with whether or not I would be able to make sense of the two unknown theme entries (and thankfully I did). And counted among the puzzles assets are REFERENDUMS and BIOSCIENCES. Very nice.

Nice puzzle with a nifty theme that rose above its gluey bits. Four stars.

*”All” except for people like my wife who suffer from retinitis pigmentosa which means, among other things, that they can’t see well (or at all) in dimly-lit situations. Even on the most star-studded night out camping, my wife has never seen more than a handful of stars at a time. Seeing all the stars in The Big Dipper is an impossibility for her, sadly. 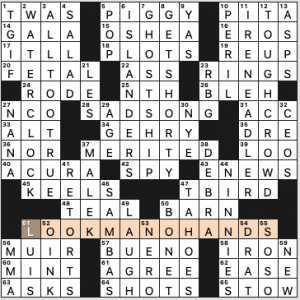 An unusual theme here. The revealer is 51a. [Cry while doing a stunt … or a hint to 2-, 7- and 12-Down], “LOOK, MA, NO HANDS.” (I’d give $10 to see a professional stuntperson holler that while doing a stunt.) Those three Down themers are all things that lack “hands” with various senses of meaning:

Feels nonstandard to have the three Down themers all flanked by non-theme answers of the same length. Then again, a 10/9/10/13 theme set requires an untraditional approach to siting those entries in the grid.

Fave fill: GET SHORTY, along with IRENE ADLER. The puzzle overall felt pretty good on the representation front.

Two back-to-back speed solves (this and the NYT above) probably both set Wednesday records for me, which is just the best feeling to kick off the day. Not that I mind challenging puzzles; I signed up for the Stormy division of Boswords, got my ass kicked, and am excited to go back for more next week! But there’s nothing like the feeling of absolutely tearing through a puzzle, and that’s what happened for me on this supposedly moderately but actually not at all challenging Wednesday puzzle from Elizabeth C. Gorski! It was a fun, fast, crunchy solve with excellent clues that were clever yet easy. 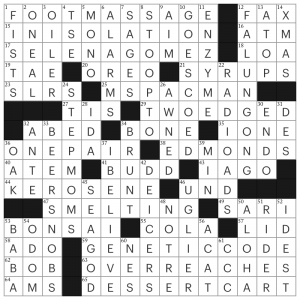 The long entries today were FOOT MASSAGE / IN ISOLATION / SELENA GOMEZ / GENETIC CODE / OVERREACHES / DESSERT CART / BEER SNOBS / FALUN GONG. A++, all excellent entries. IN ISOLATION is a little on-the-nose for early October 2020 (!), but the clue fortunately stayed away from our global pandemic nightmare. Also super relevant today is GENETIC CODE, as the Nobel Prize in Chemistry was just awarded to the scientists who developed CRISPR, the technique for modifying GENETIC CODE that has completely dominated the discourse (and funding!) in my field of bioethics. I loved seeing SELENA GOMEZ get the full-name treatment here, and did I detect a little Hamilton mini-theme with Leslie ODOM Jr and the clue on OVERREACHES [Flies too close to the sun]? I might just be primed to see Hamilton everywhere.

Overall, tons of stars from me. This puzzle was super fun — I almost wish it had lasted longer to draw out the entertainment! See you all on Friday. 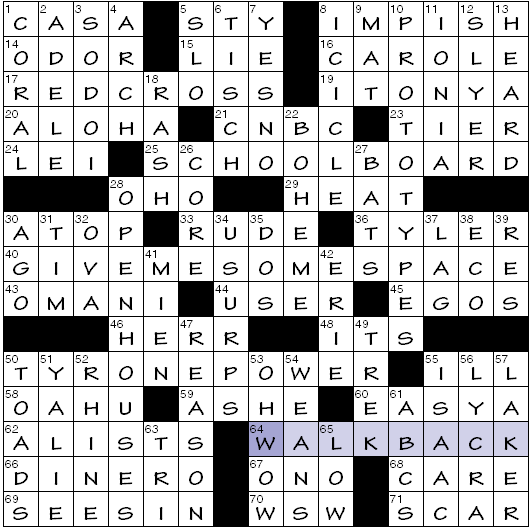 With the exception of the last, these were all very familiar to me, and made for a good example of the form. 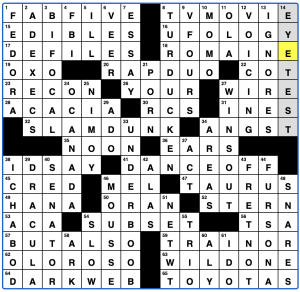 It’s a themeless week at the AVCX, this time from Kyra Wilson and Sophia Maymudes!

This had a nice combo of knowledge areas in its fill, so this puzzle was a SLAM DUNK for me.

It turns out the Flo Rida and Sia song is “Wild Ones”, not WILD ONE, but it’s what started playing in my head when I entered 63A in the grid. 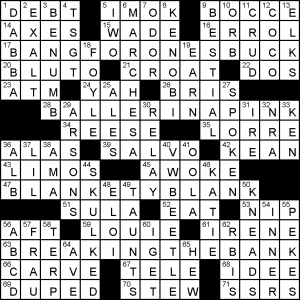 BREAKINGTHEBANK is a grid-spanning revealer (without the -ing it is a twelve, which would have caused its own problems) that indicates another three answers spell out BANK at their poles. The opposite entry is BANGFORONESBUCK, which would look and sound more natural as BANGFORYOUR… but that is more challenging to fit in. BLANKETYBLANK is pretty funny to see written out. On the other hand, BALLERINAPINK seems to only barely be a colour (out of a near infinite amount of colours). BANANAHAMMOCK is the same number of letters, but that may have raised some eyebrows…

Not a lot of note going on outside of the theme: