Note: Fireball is a contest this week. We will have a review once the contest closes.

But there’s one thing I know
The clues they send to beat me
Won’t defeat me, it won’t be long
Till Happy Pencil pops up to greet me

RAINDROPS kept falling in this grid.
But that didn’t mean my brain got up and ran and hid
Solving is for me
‘Cause I’m never gonna solve the grid by complaining.
Now I’m carefree…
Nothing’s puzzlin’ me.

Technically, it’s not RAINDROPS falling, but RAIN dropping three theme answers. The revealer at 62a is clued [Shower units, and a hint to three answers in this puzzle]. The RAIN drops in those answers in the Down direction, but then the entry continues on in the Across direction (except the first one which ends with the RAIN). 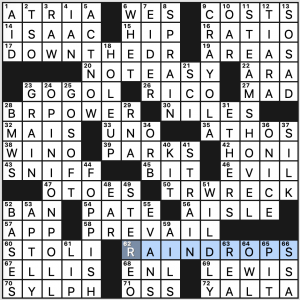 This was some good Thursday-level trickery and I needed the revealer to get the aha moment. Once I did, everything started falling (haha) into place.

Still, I struggled with a number of the more challenging small bits of fill, especially MAIS, HONI, and SYLPH. OSS, EIDER, and OTOES are more common bits of crosswordese so they were easier to suss out.

I did like STEAM SHOVEL, OPINION POLL, CRAYOLA, “ACT NOW!,” NOT EASY, GO SOFT, and HOLE UP.

Clue of note: 26a. [Gangster in Barry Manilow’s “Copacabana”]. RICO. If I wasn’t already embedding the RAINDROPS song below, I’d have done “Copacabana”. Here, I’ll link to it instead.

Tricky little theme. Fill was a little heavy on the crosswordese, but there was still plenty to like. 3.9 stars.

Today’s NYT is a collab between Francesca Goldston and Jeff Chen.  I think I like the idea of what today’s puzzle is going for, even if the grid itself is a little underwhelming: 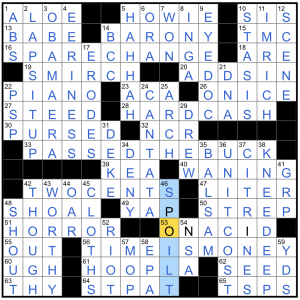 Again, I like the idea of this theme (replacing TIME in common phrases with money), but I’m not sure I dig the final execution in this grid.  I don’t love HARD CASH as a phrase – COLD HARD CASH is a thing, but I think you need both the COLD and HARD descriptors for the proper phrase.  I’m also trying to figure out if the black squares in the grid are meant to evoke a dollar sign and some T’s (for time), or if I’m just looking for more in the grid than there is.

look, if you give me KNEE DEEP and HOOPLA in your grid, I’m giving you a song from “Knee Deep in the Hoopla” by Starship. Those are the rules.

On the origins of “TIME IS MONEY” as an adage, here’s Ben Franklin in his essay “Advice to a Young Tradesman”:

“Remember that time is money. He that can earn ten shillings a day by his labour, and goes abroad, or sits idle one half of that day, though he spends but sixpence during his diversion or idleness, it ought not to be reckoned the only expence; he hath really spent or thrown away five shillings besides.”

THEME: Common phrases made up solely of two prepositions 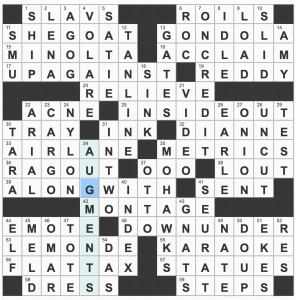 Hey! Neat! I didn’t really figure out the theme until I read the title halfway through, and it was a nice AHA! It also helped me figure out DOWN UNDER as for some reason I had OTIS instead of OTTO (despite the Simpsons bus driver being a staple in crosswords) and refused to change it.

Thought this one had a lot more bite than usual, probably because there are a lot more longer entries than usual. A very fun solve for me.

Not a fan of DO UP (looks so weird!), I can never spell SEURAT, and I think ON CREDIT is somewhat inelegant solely because it starts with a preposition. Other than that, solid!

Brendan Emmett Quigley crossword (No. 1303), “The Word on the Street”—Ade’s take 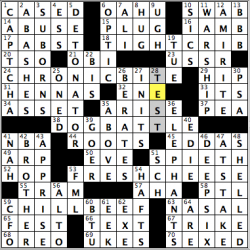 Brendan Emmett Quigley crossword, No. 1303: “The Word on the Street”

Good day, everybody! Hope all is well with you today and that a fly does not land on your head and is visible on it for a couple of minutes for the whole country to see!

There is a decent chance that, upon learning that today’s theme was HIP HOP parlance (29A: [With 52-Across, genre of music that uses the slang in the theme answers]), some solvers might have said FML, aloud or internally or both (53D: [We’ve reached peak 2020 and everything sucks,” in three letters]). Well, not only is it nice to have this change-up, but it serves as the perfect reminder of how so many actions/words that first gained traction in Black communities ended up being adopted into the mainstream after initially being seen as uncivilized by many white people in the establishment and upper management. (e.g. the fist bump, backwards baseball hat, the hip-hop music genre in general). Even a good number of the words in this theme are now staples in our everyday language, no matter your background. So you better recognize!!!!

Most of the stuff I would want to talk about with this grid was said above, so just adding that that I liked the clue for ELEPHANTS (36D: [Hannibal’s transports]) while digging AM I RITE as my favorite fill (12D: [Eh? Eh?]). Speaking of art that originated and/or was popular in the Black community, the people in the group who are my age and older probably saw the movie adaptation of ROOTS at least twice while growing up (44A: [Kunta Kinte’s novel]). That, along with The Wiz and The Last Dragon, were staples of our movie-watching experience during the 1980s. And to continue with Black excellence, seeing PLUG reminds me of the stage names of the super-popular hip hop group De La Soul: Plug One, Plug Two and Plug Three (15A: [Hair transplant piece]).

“Sports will make you smarter” moment of the day: NBA (41A: [League that played their 2020 games in the Disney Bubble]) – Along with the NBA, the WNBA played its season in a bubble at the IMG Academy in Bradenton, Fla. The NBA season could conclude on Friday, as the Los Angeles Lakers have a 3-1 series lead over the Miami Heat in the NBA Finals. The Seattle Storm just won the WNBA championship earlier this week, sweeping the Las Vegas Aces 3-0. Congratulations, Storm! 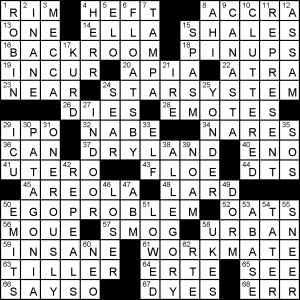 Anyone else read [Colleague … and, when preceded by “the,” what the end of 16-, 24-, 37- or 50-Across is] a couple of times, blink, and decide parsing it is an “end of solve” problem. It turns out the puzzle’s revealer should be WORKTHEMATE, but the clue is not particularly clear; I decided WORKMATE should be proceeded by “the” making THEWORKMATE, but that goes nowhere. I think the puzzle theme would’ve been clearer ditching the cute revealer and just being WORKTHE, awkward as that is. In any case, you need to WORK(the) ROOM, SYSTEM, LAND and PROBLEM.