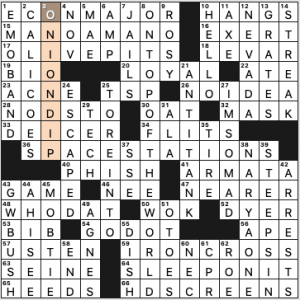 Either this puzzle’s markedly harder than the typical Friday crossword, or it was just pitched to a different wavelength than mine. I was stymied by the southwest corner for, so much so that it irked me like a Newsday Saturday Stumper for a bit. Oof!

Here’s where I floundered. 43d. [Prez with the same initials as an N.Y.C. landmark]? Eventually pieced together GWBUSH, which is not remotely a common way to refer to him, is it? People who aren’t from NY/NJ don’t much think about the George Washington Bridge or traffic reporter shorthand for that area. 57a. [Hwy. through St. Paul, Minn.]? I-35W goes up through the Twin Cities, and intersects I-94, and these are both major highways. US TEN is a terrible entry, both because it’s nothing people should be expected to know (and because it spells out its numeral. This corner also has the iffy AH I SEE (which could equally well be OH I SEE or OH YEAH or who knows what). And 45d. [Connection to the underworld] is a singular MOB TIE, just the one? Boo. “I only know one guy.”

Looking past that corner, the rest of the puzzle was markedly better. ECON MAJOR evokes the current economic Trump crash with the tricky [Student who might take a crash course?] clue. SPACE STATIONS is nice but would probably be better in the singular, since currently there is just the one. GODOT, gymnastics’ IRON CROSS (don’t unleash your biceps, pal!), SLEEP ON IT, EMO BAND, ON TOP OF THE WORLD (assume the SPACE STATIONS clue that echoes this entry was intentional, since these are the central Across and Down entries), and NARY A ONE.

I did this puzzle while listening to the Yankees try to hang on against Tampa, so I was a bit distracted. That’s my excuse, anyway, for not catching on to the theme until after I’d finished. Each theme answer is a female-farm-related pun on a recognizable phrase. 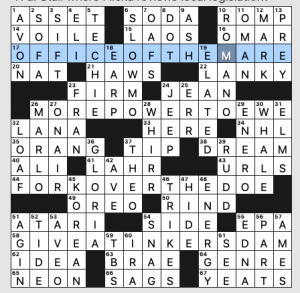 I like the general thrust of this theme. The clue for 44a and the answer for 58a seem a bit forced, which detracted from my solving pleasure. I still enjoyed it overall.

What I didn’t know before I did this puzzle: I had never heard of “Let the Right One In” which is apparently a 2007 romantic horror film from Sweden. I also had no idea about Revenants and Wynonna EARP. 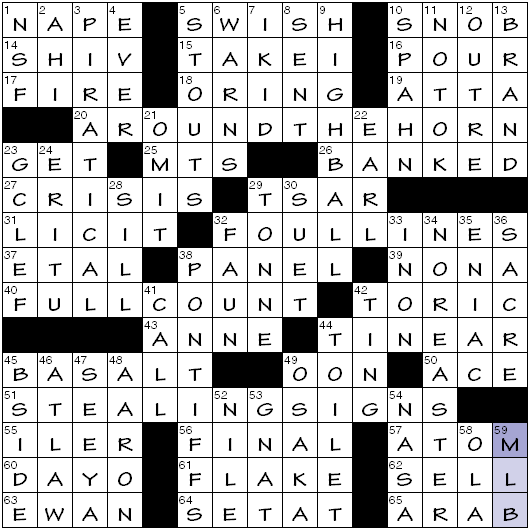 I can easily contain my excitement. However, since the constructor’s name is not already in FiendCo’s tag list, I presume it’s a debut of sort, and I should temper my antipathy apathy opinion.

These deliberate misinterpretations are kind of cute.

Other baseballiana: 10d [Pitcher Warren with the most lifetime wins for a southpaw] SPAHN symmetrically opposite 48d [Judge on a diamond] AARON.

Haven’t got much else to say, so I’ll lean on the crutch of adding another musical selection. 12d [Quite unusual] OUTRE.

This puzzle has an oral fixation. Each grid-spanning theme entry is a colloquial phrase clued with respect to a dentist. 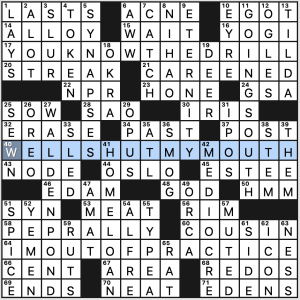 I enjoyed this theme. All of these are fun phrases the way they’re clued, and they set the tone for a lively grid. Nice job!

The long fill is equally nice, especially GOING SOUTH and WALDEN POND. PEP RALLY and HOME LOAN are nice as well, and SYNAPSES, ETERNITY, and MEDIOCRE are better than MEDIOCRE, I’d say.

I like NIHAO, but not so much GSA [Federal property org.]. REDOS [Second chances] looks weird, but it feels modern in a slangy way.

If you’re going to give me a dentist-themed puzzle, then I have to give you Steve Martin’s dentist song. That’s the drill. Now spit!

Extremely short and late writeup today, thanks for your patience!!! Today’s lightly challenging puzzle from Patrick Berry took me about a minute longer than Wednesday’s did, but YMMV. This is a well-made puzzle that I don’t have a ton to say about, which is fortunate given how little time I have to say it! 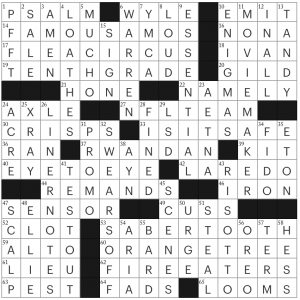 Long entries today include: FAMOUS AMOS / FLEA CIRCUS / TENTH GRADE / SABER TOOTH / ORANGE TREE / FIRE EATER / LINER NOTES / MOVIE MAKER. Nothing jumped out at me as particularly eye-catching or exciting in the long entries (or the short fill), but I did notice that EYE TO EYE also appeared in a recent New Yorker by Wyna Liu. I guess you could say she and Patrick Berry see… never mind.

Ok that’s really all I’ve got today, thanks for letting me off the hook today!

This entry was posted in Daily Puzzles and tagged Adrian Kabigting, Patrick Berry, Sam Buchbinder, Will Tobias. Bookmark the permalink.