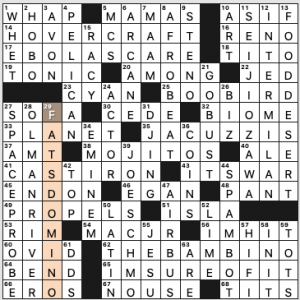 My son is working on a term paper on an EMINEM album for his Hip Hop Music Production course, so he certainly knew 34d. [Longtime music collaborator with Royce da 5’9″], whereas I had not heard of Royce before. I appreciate learning such things. The video below includes both artists and lots of Detroit sites.

Aside from EMINEM, there’s plenty of Scrabbly fill here. JACUZZIS crossing SEIJI OZAWA, MOJITOS crossing JOE SCHMO, DJING with a great clue, [Turning the tables?]. And lots of sparkle aside from the uncommon letters: EBOLA SCARE, BOO BIRD, THE BAMBINO, “I’M SURE OF IT” (could do without the crossing IN IT and nearby I’M HIT and IT‘S WAR dupes), OL’ MAN RIVER, FATS DOMINO, AFROBEAT, GO BUST, and FOOD DESERT.

On the representation front, we have the MAMAS half of a band, TITO Jackson, Jennifer EGAN, Fela Kuti, SEIJI OZAWA, FATS DOMINO, and Royce da 5’9″ covering a wide spread of musical genres and cultures (plus novelist EGAN). There’s also fictional JED Bartlet (that single T at the end has always bugged me), Babe “THE BAMBINO” Ruth, EMINEM, and Bach in a JESU clue.

4.25 stars from me. An enjoyable themeless crossword.

Here’s a hint… read those titles!

THEME: Synonyms for “clue” are “in” common phrases. 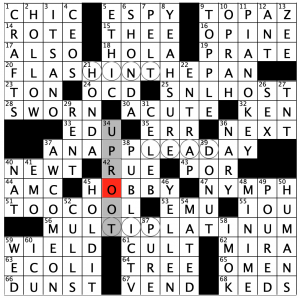 SPROOT! I really thought that was a new word that I was going to learn for 34D [Pull out of the ground]. Sounds fun, right? “SPROOT that potato!” It’s because I was confident that the answer for [Howard’s end] was ESS (as in the ending of Howard’s) instead of EDU, which is the ending of an email address for Howard University. I did think it strange to have two cryptic clues like that with ZEE being the answer to [Part of a fuzzy pair?] but oh well. SPROOT is way more fun to say than UPROOT.

I liked this puzzle! Simple, clean, consistent theme (title-dependent if some solvers were having difficulty picking up on it). I solved the circle version. I haven’t checked the regular web version, but I assume it asks the solver to count letters, which is unfair, not as visual, and takes a lot of the enjoyment out of the solve (whilst being very confusing to new solvers). They’re fixing it, but I hope that fix comes soon. It’s been a hot minute.

11D [One getting depressed by classical music?] was a fun clue for PIANO KEY. It might fall in the “too cute” category for some (I mean, no one really refers to piano keys as being “pressed” I don’t think) but that was a fun AHA reveal.

Solid all around. With just three strong themers, the rest of the grid has room to be playful. This appears to be a debut for Beth Rubin! Congrats! 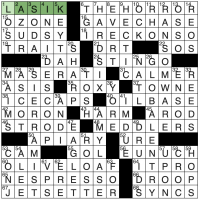 I am convinced more and more that bylines are important. I don’t believe I know Jamey Smith, and this puzzle took me twice as long as normal for a Saturday LAT challenger puzzle. I had most of the W side of the grid filled in in just a few minutes, but the NE corner really gave me fits. Once a couple of entries finally fell, and once I learned a couple of new/rare answers, the solve finally happened. Great puzzle. I am not sure if the puzzle was just that much harder or if I just had a brain cramp on this one, but it played slightly more difficult to me. How did you get along with this one? 4.6 stars for a slightly toothier LAT Saturday puzzle!

I could go on, but I will stop there. Hope you enjoyed this puzzle as much as I did. 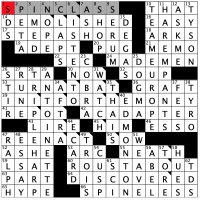 I found the LAT puzzle hard this week, so it should be no surprise that I didn’t even think I would FINISH this week’s Stumper. Look at all those error marks! The NE corner fell first, and by first I mean after the initial blank stare and then pausing the solve and coming back after a while! Lots of thorny spots throughout this puzzle, and I am surprised my time was ONLY 20 minutes. I figured it would be close to the 45 minute mark, which I have been on Stumpers I have blogged on this site previously. Another great Stumper, Matthew, and I hope to one day meet you in person and discuss your craftwork! 4.5 stars from me.

Everyone have a safe and healthy weekend! I am off to do Puzzle Boat 7 at pandamagazine.com! 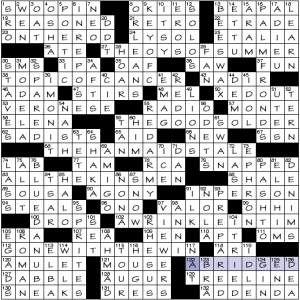 Each of the theme answers—originally book titles—is shorted one letter, to wackified results. I figured on manually rounding up the missing characters, but that turned out to be unnecessary, as the revealer handles the process.

Frustrated by not having to do any work to uncover the meta aspect, I turned to the authors’ names to try to find something worth anagramming from their initials, but had dismal luck. Regardless, this is a well-constructed theme and a fun solve.

That’s going to have to be it, as breakfast is calling to me.