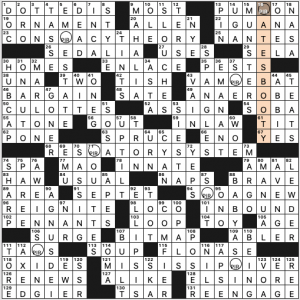 I did this puzzle without the timer, while watching Terminator: Dark Fate and doing Pokémon Go raids with a couple California crossword pals. The theme is pointed at by the puzzle title: PIR (spelled-out π + R) appears in 7 rebus squares, not symmetrically placed and not located such that the seven PIRs form a circle (which would have been a neat trick!). So it pretty much plays like an unthemed puzzle without wordplay in the thematic answers, just rebus squares. Rather dry, I thought, and PIR just looks weird.

20a. [British pop singer Lily] ALLEN has only cracked the U.S. top 40 once, a feature on a T-Pain song. Here’s the video, filmed in Amsterdam. What I learned just now: T-Pain’s an R&B singer, not a rapper.

What’s in a name? Well, in this puzzle, the role that an actor played. How meta! 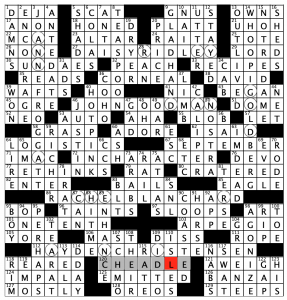 The only themer where I was familiar with the actor’s name, the role he/she played, and the character was JOHN GOODMAN. That made it more fun for me though, as knowing parts of the whole answer and figuring out the rest is a more interesting solve. JOHN GOODMAN was too easy!

I’ve never seen any of the Star Wars series, but I’ve gleaned the characters’ names enough through crossword solving to get by, so I inferred both ANI and REY and the rest of actors’ names fell into place. Despite having seen (and loved) Downton Abbey I couldn’t remember the characters’ names, let alone the actors (except Maggie Smith!). Didn’t know that WHOOPI played GOD, and really wanted ALICIA SILVERSTONE to fit (one letter shy!), but alas CHER is nowhere to be found in her name.

So this is bound to get some side-eye from people who gripe about unfamiliar proper names in puzzles, but for me it was a lot of fun to suss out and, as always, the crosses were all fair.

Also enjoyed the extra title in the puzzle. Impressed that Evan was able to find this set… that’s a lot of Onelook.com searching I would think? Perhaps think of short character names first and find actors second? I dunno. It hurts my head to think about it.

ALSO, here’s a note from Evan about a virtual event happening next week:

On Sunday, Oct. 18 at 12 pm ET, I’ll be chatting on Instagram Live with Harris Paseltiner of the band Darlingside as he attempts to solve my puzzle. I imagine we’ll be talking about crosswords and Darlingside’s new album “Fish Pond Fish” which they released just yesterday. Check out both the chat and the album if you get a chance (I got to hear it ahead of time; it’s really good)

I get the theme, but I’m not sure I understand the title. Any help? 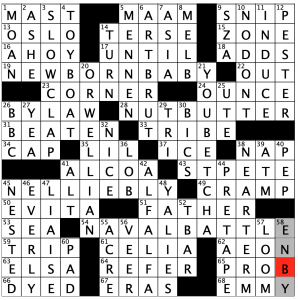 I had to google ENBY. It means NB or non-binary. I just haven’t heard the initialism I suppose.

I don’t have too much to say about this one. I liked it just fine. I wonder how many N/B phrases there are. NUT BUTTER is a very strange term to me. I don’t think I’ve ever said it aloud.

Like the tongue twister reference for TOY BOAT. Go ahead. Say it five times fast. Funny enough, I’ve practiced that one and it’s the only tongue twister I can handle!

Theme: The names of world seas are found in the circled letters in the Down direction, though they are part of the theme entries in the Across direction. The revealer at 118a is RISING SEA LEVELS [Oceanographer’s climate concern, and a theme hint]. 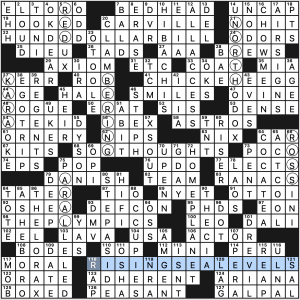 This is a pretty complex construction with a ton of theme material, especially when you include those long Down entries.

That said, I’m not sold on the sea names coming down in their respective entries. With RISING SEA LEVELS as your revealer, wouldn’t it make more sense if they were going upward?

And with all that theme material and the complexity of the crossings, the fill does suffer, starting at 1d with EHH but also including OTTO I, ELIA, ILIA, OSS, plus the usual suspects of O’SHEA, XS OUT, AGEE, ERAT, ULNA, as well as the dupes OK DEAR and OKS.

There are definitely high points though: BED HEAD, James CARVILLE (whether you like him or not, he’s quite a character), HIBACHIS, CHOW MEIN, EGO TRIP, ACT COOL, HOME PLANET, “STEP ASIDE,” and THE LORAX.

But despite all those great entries, I really felt the weight of the gunkier fill during the solve and they dragged down the whole experience for me. Couple that with my feeling that the theme entries should be going downward, and it results in a grid that felt more problematic than enjoyable. Three stars.

Very brief today because I am tied up but forgot to get a sub:

Theme answers are words or phrases cued as if they referred to art. 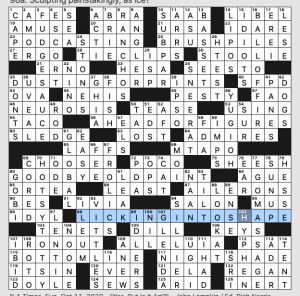