This month, Francis asks “What musical is hinted at by this puzzle?” 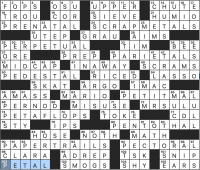 We have a set of themers plus an across entry that seems important:

Given the title and the clue for 102a, I figured I needed to “pluck” the PETALs out of the themers, as it were — which I did, leaving:

… all of which are entries in the grid. Clues for those entries are:

Take the first letters of those clues in order, and you get SHE LOVES ME, which is a musical and also half of what one might say while plucking the petals of a flower (a daisy?).

She Loves Me was written and composed by Jerry Bock and Sheldon Harnick (also known for Fiddler on the Roof), and premiered on Broadway in 1963. It had a popular revival in 2016, featuring Zachary Levi, Laura Benanti, and Jane Krakowski, among others. If the plot — about two shop clerks who initially dislike each other but then fall in love as anonymous penpals — sounds familiar, it’s because you may have encountered it — an adaptation of the 1937 Hungarian play Parfumerie by Miklós László — three other times: as the 1940 film The Shop Around the Corner, starring Jimmy Stewart and Margaret Sullavan; the 1949 musical In the Good Old Summertime, starring Judy Garland and Van Johnson; and the 1998 film You’ve Got Mail, starring Tom Hanks and Meg Ryan.

A trip to the library has made a new girl of me, for suddenly I can see … the magic of books!