The groups of circles contain the same four letters S, T, O and P, in rotating configurations (as you travel clockwise from the NW). We’re treated to not one, but two suitably apt revealers: 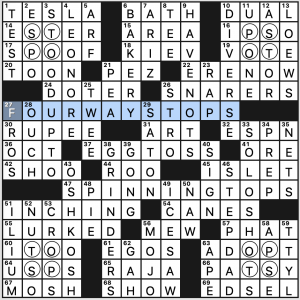 The theme felt rather pedestrian until I discovered the second revealer. Then I was suitably impressed. What are the odds of having two perfect revealers to explain the exact same occurrence and have them fit symmetrically? That’s serendipity (and excellent theme execution) in action. Nicely done. A theme like this offers little wordplay (other than in the cluing), but that double revealer definitely won me over.

The long fill held its own, though the short fill was patchy in places. In the plus column we have HAVE-NOTS, EGG TOSS, SOLO SHOTS, STEPDAD, GRINDERS (sandwiches), and OSH KOSH. And on the “meh” side there’s ESTER, ESPO, IPSO, ERE NOW, SNARERS, DOTER, STRO, ILIUM, and GAH. Bah!

Despite some trying short fill, I enjoyed this theme. 3.8 stars from me.

And what better way to go out than with The Four Tops? 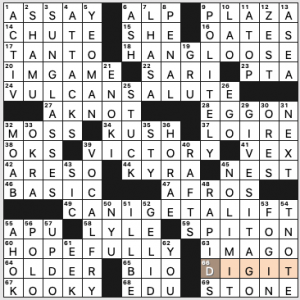 Either I have lost my mojo or this puzzle is wildly out of place on a Wednesday. It took me longer than most Saturday NYTs! Crikey.

The theme revealer is 66a. [What each number in the starred clues represents], DIGIT, and that’s DIGIT as in finger (or toe, technically) and not number. Various hand gestures are clued by describing what you do with your fingers to make them:

I like the theme all right, and certainly it’s a fresh angle. One thing that made the puzzle feel hard, aside from the “what are these ordinal numbers all about” issue, is some really rough fill. I don’t know that I’ve ever seen [So much, in music], TANTO before. The ENOKI/KUSH crossing ([Long-stemmed mushroom], [Potent strain of marijuana]) probably stymied plenty of solvers. Never heard of [Newswoman Phillips], KYRA, and it’s a damn good thing I dredged HORAE ([Goddesses of the seasons]) out of the dusty recesses for that R.

The fill might have been smoother with those 10-letter Downs split into 5s and 4s. It’s a 76-worder, and you can go up to 78 without alienating the editors. Would have been good to not pile I’LL BE and I’M GAME into the same puzzle as CAN I GET A LIFT, too.

It is true that John OATES was 16a. [Hall’s partner], but these days, Daryl Hall entertains himself and his fans with “Live from Daryl’s House” performances with assorted other musicians and singers. Here’s one with a cover of a 1980s song by Paul Young. The actual song portion starts around the 1:15 mark.

Four stars for the theme, less for the fill.

Hi team, welcome to Wednesday. Today’s puzzle from Natan Last bears all the hallmarks of a Natan Last puzzle, and (for me) perfectly nailed that moderately challenging Wednesday vibe. Great way to start the day! 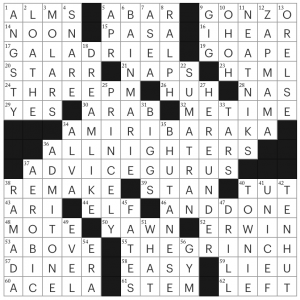 The long entries today included a central staircase of AMIRI BARAKA / ALL-NIGHTERS / ADVICE GURUS and many long downs, including GALADRIEL / THE GRINCH / DREAMLIKE / BAIN MARIE / BHUTANESE / HEREUNDER. The staircase is super solid, and although I didn’t know AMIRI BARAKA, all of the crosses were very fair. I enjoyed the symmetry of GALADRIEL and THE GRINCH, who at first seem like completely opposite fictional characters, but upon further consideration do share a love of gifts, shiny bobbles, trees, and making cute small creatures do the work they should really be doing themselves.

Overall, lots of stars for a well-made, entertaining, Very New Yorker™ puzzle. That’s all from me today! 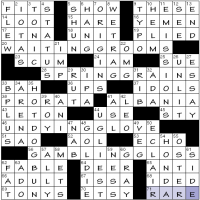 In which an extra G is introduced to the beginning of each phrase’s second word, immediately after the first word’s -ING ending. Kind of reminiscent of the two Cs in “McClain” … but I digress.

Aside from the first letter in  56-across, the only Gs in the grid are the doubled ones of the theme answers. There are none in the non-theme sections. 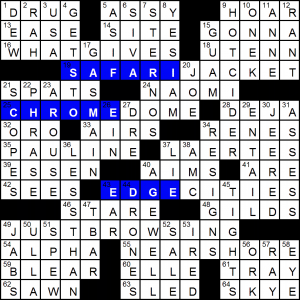 Product placement in crossword themes is a touchy subject. Here we get kind of equal opportunity advertising with the first, third and fifth most popular browsers: Google CHROME, Microsoft EDGE, and Apple’s SAFARI; featured at the start of three long answers. Firefox (2) and Internet Explorer (4, still) are excluded for obvious reasons. 8th Place Opera is bundled with many phones here, especially more basic ones and has a more amenable beginning. CHROMEDOME and SAFARIJACKET (whose clue doesn’t seem to be claiming the term for “bush” for Australia, for once) are both excellent choices. EDGECITIES is a tad more technical. 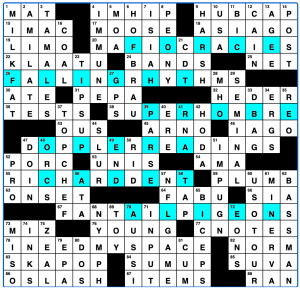 This week’s AVCX is a 17×17 grid from Byron Walden.  Byron’s cluing wavelength generally exists in a separate space from my own solving wavelength, and that was definitely true for the bottom part of this grid.  Let’s take a look at the theme:

I had an additional challenge with this grid, as my go-to solve program (an HTML5 Across Lite tool) did not render the circled/shaded squares in this week’s grid.  Once I saw those, grokking what was going on was much simpler – FORCE, FLIGHT, PROBE, OPERA, CADET, and ALIEN can all have the word SPACE proceed them to make SPACE FORCE, SPACE FLIGHT, etc.

As mentioned, Byron and I tend to be on different wavelengths, but I thought that might not be the case – I was sailing through things like TOP CHEF, KLAATU, and “A Salt with a Deady PEPA”, and then I hit the bottom third of the grid and slogged through trying to figure out what subgenre the ska bands No Doubt and Reel Big Fish fell into (that’d be SKAPOP) or Athena’s counterpart (that’d be MINERVA).  Still, this was a fun solve.