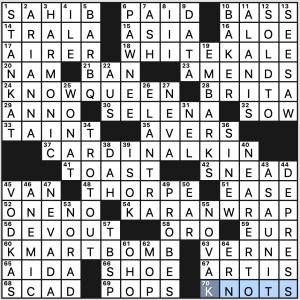 Solid theme. I wish the one entry could’ve been based on something more universally known, but maybe I’m just a good-for-nothing schlump.

The fill did not impress today; too many preposition-ended phrases: STANK AT, WON AT, SOLD TO, NEARER TO. Throw in bridgey ONE NO (which I’ve decided I’m going to start parsing ON ENO for no reason), more names I didn’t know—ARTIS Gilmore of the NBA and the NEVA River in Russia—and random Italian NEL clued as a fill-in-the-blank. If there’s a highlight in the fill, I guess it’s (surprisingly) the preposition-ended phrase TROT OUT which feels like it can stand on its own just fine. And HARMONIC. The electrical engineer in me likes that word.

I liked the theme fine, but the fill left me wanting. Three stars.

In what I hope is an apt choice, I’m going to cover Lindsey Hobbs’ (debut?) Thursday NYT in the reverse of how I’d typically do so.  Let’s look at the revealers: 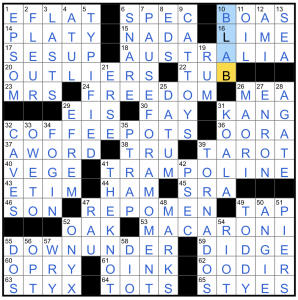 With that in mind, it’s easier to spot what’s going on with each of the four clues that’s simply “-” in the grid.  In addition to some Aussie favorites entered in the grid normally like the KOALA, four entries start in one row, then flip DOWN UNDER to the entry below:

I like the Aussie flavor throughout the theme entries in the puzzle (including the VEGEMITE…I’m partial to Marmite as far as yeast extract spreads go, and it’s definitely an acquired taste, but it has good umami flavor!)

I dig the cool grooves of Australian band Confidence Man

Elsewhere in the grid, I liked the cluing on the bits of longer fill that ran throughout — “Things with perks?” for COFFEEPOTS, and especially “Bouncer’s equipment” for TRAMPOLINE

This was a fun theme! I didn’t catch on to the whole thing right away. Each theme answer has ST inserted twice into a base phrase. Wacky clues result. I saw the one at the beginning and missed the second one for a while. 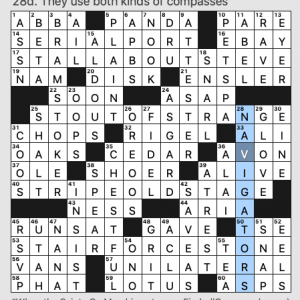 All the base phrases are solid and the theme clues and answers are amusing. Nicely done.

What I didn’t know before I did this puzzle: that ABBA had an album called “Voulez-Vous.” Also did not know that the 2022 Winter Olympics have a PANDA as a mascot or that he? she? they? is named Bing Dwen Dwen. Have never heard of Eve ENSLER‘s play “Fruit Trilogy.” And I would have misspelled OREOOOS. It looks like it should have an H at the end.

Sounds like it’s just a “lose the S puzzle,” but there’s more to it than that!

THEME: Lose the S at the beginning of a word, but also change the EE part of that word to EA to create wackiness. Very specific! 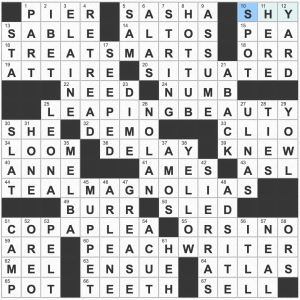 I’m surprised how many words there are that you can do this with! Are there others besides STREET / TREAT, SLEEPING / LEAPING, STEEL / TEAL, SPEECH / PEACH? I’m really impressed with this set.

Fillwise, I floundered a lot. I was distracted (solving during study hall supervision), but I botched the NW badly putting OTTER and STOLE for [Mink cousin] before the correct SABLE. Had WADE for [Walk over water?] even though it makes no sense, and AS IF in place of I BET. Hot mess result.

Winning clue: [Word that surrounds “short of money”] SHY. although I think the cryptic nature of it is asking for a “?”

I also learned what a backronym was. Not because it was in the puzzle, but because I googled H.E.R. since I’ve never heard of… her. H.E.R. is her backronym for Having Everything Revealed. A backronym, as I discovered, is a word that already exists and is then turned into an acronym.

Good times, and I learned stuff. 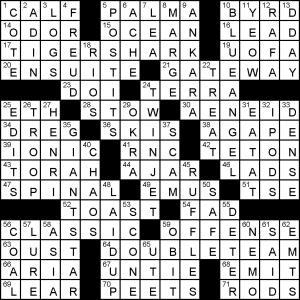 I’m not one-hundred percent sure of the rules in play here: DOUBLETEAM is the revealer, and each of four answers consists of two pairs that, if an ‘S’ were added to each, would make Big 4(?) North American sports teams. I’m not always sure which teams go with which sports, but I don’t see an NBA team there?

The puzzle itself is ably filled, a lot cleaner than many of late, partly aided by the pinwheel design, which is sometimes underutilised. There is a Mallorca mini-theme with PALMA and RAFA. Growing up in a (nearly) subtropical area, the idea that [Avocado ___] TOAST is Millennial feels weird. In a lot of areas, especially Natal and Mpumalanga they’re abundant and often free to pick… New to me: PEETS – is it run by Calvin and Amanda?