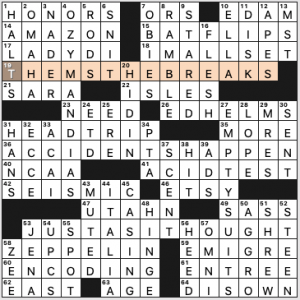 What a fun themeless! (Speaking of that—the Boswords Fall Themeless League has had two terrific themelesses so far, and it’s not to late to join in!) Damon found a good way to include a couple 14s (often hard to wrangle) along with a 15, a pair of 10s, and a bunch of 6- to 8-letter entries. Among my favorites: sportsy BAT FLIPS, AMAZON clued as a warrior, “THEM’S THE BREAKS,” ED HELMS, the druggy-feeling pairing of HEAD TRIP and ACID TEST, “ACCIDENTS HAPPEN,” “JUST AS I THOUGHT,” ZEPPELIN, literary OZYMANDIAS, and EMPTY SUITS.

The closest things to entries I found annoying are MST and ZEE, not puzzle-wreckers. So much smoothness.

4.25 stars from me. Breezy and fresh Friday puz.

Happy Friday, fiendlings! Today we have a lightly challenging puzzle from Wyna Liu which taught me new things and made me laugh. All-around delightful solve! 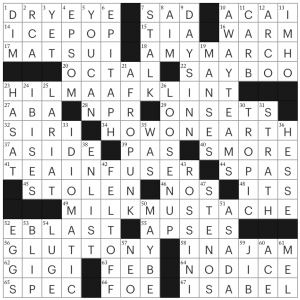 The long entries here were my favorite– I didn’t HILMA AF KLINT, so virtually every letter was a new discovery for me that was aided by eminently fair crosses. As usual, this entry led me down a wikipedia wormhole, and I could probably now talk at length about HILMA AF KLINT‘s membership in a sort of occult artist collective and her “before her time” aesthetic. I *could*, but in the interest of everyone’s time, I won’t. I also love the juxtaposition of serious artist HILMA AF KLINT and the idea of a MILK MUSTACHE on Batman, Beyoncé, and Bart Simpson. It’s a silly idea and a lovely clue, and I appreciated it! Other good longish entries include HOW ON EARTH??? (punctuation added), IDIOMATIC, and TEA INFUSER.

Overall, tons of stars from me for an enjoyable, smooth, educational solve. See you next week! 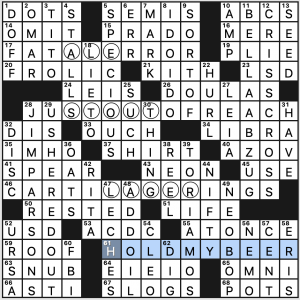 Fun revealer. I’ve never heard the term CARTILAGE RINGS, but it was easily inferable from the clue.

Only four themers means there’s room for a lot of NIFTY fill. However, if proper names aren’t your thing, you might have struggled here with BELLA ABZUG, JIM PARSONS, and TORI AMOS. I do like CRISS CROSS, USHERED OUT, and SPECIOUS.

That Z crossing of BELLA ABZUG and AZOV seems pretty unfair. I didn’t know either name, to be honest, however Z was my first guess. It just so happened that I had a typo elsewhere in the grid, unbeknownst to me, and so I ended up running the alphabet for that square, only to find I was right in the first place. Sigh. 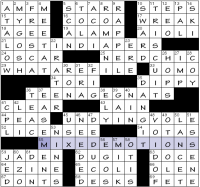 A 16×15 that—as one commenter has already noted—played tougher than usual.

I found these to be only moderately entertaining. For a few of them it was tough to discern the one half or the other, which made it difficult to break through into some sections of the grid. Toughest by far was the northwest section where this was compounded by some abstruse cluing.