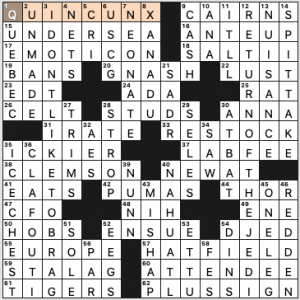 Today I learned that I didn’t actually have any idea what QUINCUNX meant. I might have thought it was a classical Roman official. There it is at 1-Across: [Pattern of five shapes arranged like this puzzle’s central black squares]. Basically the pattern of the 5 side on a die, four corners and the middle—or the “distanced” floor markings in a Northwestern Memorial Hospital elevator. The chunks of black squares in this puzzle are PLUS SIGNs, which is 1-Across’s symmetrical entry. So a fill-and-grid-art mini-theme is what we have here.

Fave fill: The vocabulary-expanding QUINCUNX, CLEMSON / TIGERS, “I DON’T LIKE TO BRAG …,” XANADU, NAHUATL, RETURN OF THE JEDI, and SPIT TAKE.

There was a good bit of fill I wasn’t loving in this puzzle, and I probably would have enjoyed the puzzle more if it were a straight-up themeless with QUINCUNX clued in some flatly dsecriptive way, but I do appreciate the visual presentation of “hey, that there is a quincunx, and now you know.” 3.8 stars from me. 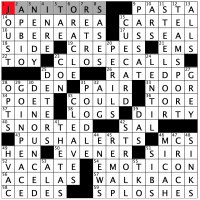 Another new byline; at least to me! Great puzzle, even though I don’t know the constructor. Not too difficult, and in true LAT fashion I don’t see anything overly difficult or obscure. I found this fun to do. And that is the point, right? I will keep this short since I am still neck-deep in Puzzle Boat 7 and a ton of cryptic crosswords. 4.6 stars from me. 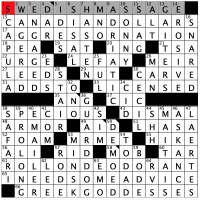 Not too bad this week. Well under 15 minutes, so that is OK by me. A very wide-open grid this week, and with tough crossings on the shorter answers that makes for quite a difficult puzzle. But while this wasn’t frustratingly hard, it did fight back for at least the first part of the solve. I have I believe 4 error marks in the grid; the answer at 50-Across (see below) really stumped me, likely due to it’s not being seen in print often and slightly weird spelling (at least to me!). Fun puzzle, and more good practice for the Monday night Boswords puzzles! 4.5 stars this week.

THEME: Disney princesses’ names are reimagined as homophones in a common phrase 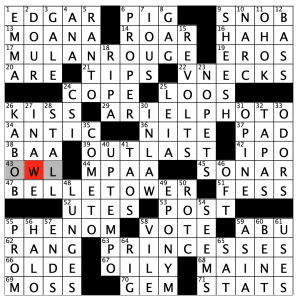 This is a nice find! I can’t imagine there’s that many more names in the Disney princess canon with which this will work. I mean, there’s JASMINE (JASMINE RICE) but the spelling doesn’t change, so that wouldn’t work.

The only thing I found strange was the “revealer.” It’s almost like it was just trying to fill a theme spot- it felt totally unnecessary to me (and oddly clued), but no harm done! 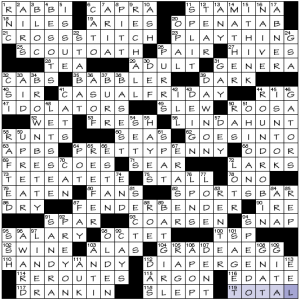 Famous “sidekicks” that also happen to be parts of phrases or compound words are described in the latter context.

Honestly, I didn’t care for this theme much. Oftentimes the recast meaning wasn’t far divorced from the original, and it all seemed rather stiff. This was one of those solves where the 21×21 grid felt at least as big as it is, which is to say, a slog.

That draggy sense was abetted by a few forced constructions/uncommon words infiltrating the place: check out, for example, 59d [Hoist] UPREAR and 104a [It has a flawless shell] GRADE A EGG to see what I’m talking about.