Theme: Synonyms for “drinking establishment” are found in the circled letters, split between adjacent entries. 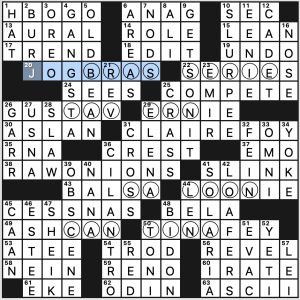 I had a tough time at first with this theme mainly because I had OLD CHAP at 5d [Brit’s buddy, in dated slang] instead of OLD BEAN. That one error kept me second-guessing as to what was actually occurring in the theme. But the circled-square pattern and the puzzle title suggested that it wasn’t anything too tricky, and once I uncovered TAVERN, and realized all the clues were fairly straightforward, things started moving more quickly.

I like the fill today especially CILANTRO (yum!), LOAFERS, SLURPEE, CLAIRE FOY, RAW ONIONS (anyone else go with RED ONIONS first?), GETS ON IT, and the juxtaposition of GANGSTA and OLD BEAN.

There are a lot of proper names in that south central section with TINA FEY, LEN Goodman, BELA Fleck, and TONI Collette. I would rather see topical BIDEN instead of BID ON at 48d, but that would mean changing RENO to RENE. Too many names, I guess.

Solid theme (aside from JOG BRAS), with nice fill throughout. 3.8 stars. 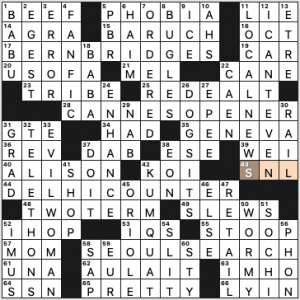 My son just dug up an old box of my papers from the basement and, since he’s done with midterms, he’s been entertaining himself with my old college papers, test score reports, and correspondence from friends. News flash: The political ills and inequality I wrote about for Prof. Paul Wellstone in 1987 (before he was elected to the U.S. Senate) are still with us. Is there a segue from this to the puzzle talk? Not really!

Dory Mintz makes his debut here, and is one of the many new constructors to have made use of the mentorship and support available via the Crossword Puzzle Collaboration Directory. The theme is geographical wordplay involving world cities:

Fave fill: FANFIC, “I CAN’T EVEN,” “EVIL WOMAN,” WORMY, KUMQUAT, DOG-SITS, LOCAL NEWS. And BUGLES! If those [Cone-shaped corn snacks] weren’t so damned salty, I would buy them too much. Less keen on dated GTE, prefix PHON-, EGEST.

Conversation from my couch going into this morning’s solve: 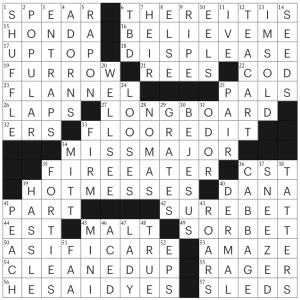 Me: Oooh, an Erik Agard puzzle!
Partner: Does that mean it’s going to be hard?
Me: Not necessarily, but it does mean there’s going to be a kickass woman of color in the middle of the grid.

As usual, Erik did not disappoint, with MISS MAJOR, a trans rights activist and all-around badass, occupying the central spot. We also have a gorgeous and unique grid design, loads of interesting entries and clues, and a few perfect colloquial phrase/clue translation pairs, all of which add up to one of my favorite New Yorker crosswords of the month.

The grid creates a lot of opportunities for long and medium-length entries in each segmented corner and a dazzling five-entry staircase in the middle. The 9-letter stacks i the NE and SW are THERE IT IS / BELIEVE ME / DISPLEASE and AS IF I CARE / CLEANED UP / HE SAID YES. I love the clues for THERE IT IS [“Right on cue!”] and AS IF I CARE [“And what about it?”], a reference (probably) to Ariana Grande telling someone off. HE SAID YES is also excellent, subverting (some) solvers’ heteronormative expectations that proposals involve a man proposing to a woman, instead of the reverse, or, perhaps, a man proposing to another man! The staircase is the highlight of this puzzle though, with LONGBOARD / FLOORED IT / MISS MAJOR / FIRE EATER / HOT MESSES cascading through the center of this puzzle.

Overall, all the stars from me. This puzzle is excellent!!! See you all on Friday. 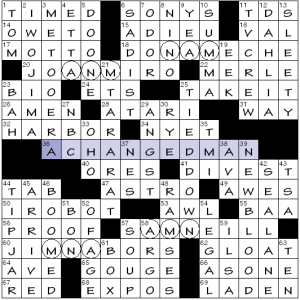 Whew, this is tough.

I like how each scrambled M-A-N spans the two names, and especially how the letter order is never repeated. That’s really well done. Downside is that there are three actors and one artist, which is unbalanced. 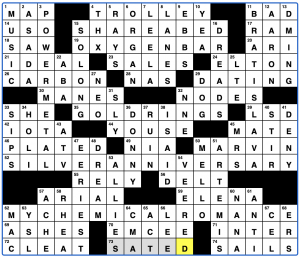 Paulo Pasco has today’s AVCX, and it was a nice 17×15 grid that went perfectly with my lunch hour.  It’s got L-R symmetry rather than the typical crossword rotational symmetry, so that’s fun.  Let’s poke around under the hood and see what the theme is:

Awwww, it’s a love story! Seriously, this was cute and just the right level of punny to make me smile the entire solve.

Hello!  I was a teen at the exact moment MY CHEMICAL ROMANCE had their upswing on the music charts, so I was very familiar with what needed to go at 62A.

That’s all I have to say on this one – I just thought it was neat.  Perfectly calibrated at 2/5 on the difficulty scale. 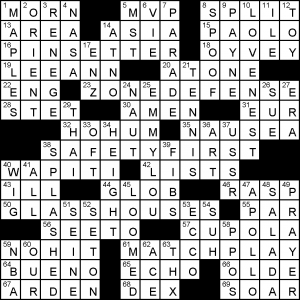