Oooh, this is a good one. Our theme is a sort of before-and-after in which the first “phrase” is a single letter followed by a word. That word then leads into the second half of the entry which is another well-known phrase. It’s all revealed with FEDEX at 66a [Letter carrier that literally distributed letters to 16-, 22-, 36-, 47- and 58-Across]. The cherry on top is that the letters that were “distributed” spell FEDEX. An elegant touch! 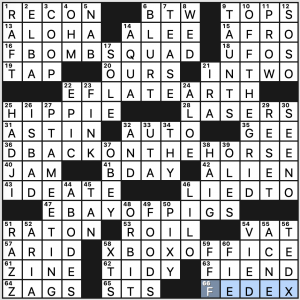 My only quibble would be that I don’t consider FEDEX to be a “letter carrier.” I suppose one would use the company when sending an important time-sensitive letter, but I don’t think of that as their primary service. But I’m happy to give the puzzle a little latitude here because the theme is so fun.

Okay, another quibble. 41a is BDAY which is unfortunate given its similarity to the theme entries. But again, a little latitude is warranted because it’s clearly not a theme answer.

In the fill, I got similarly concerned at 27d with its start of PTAME_ and its clue [After-school event]. I thought it was going for “play”-something, but it turned out to be PTA MEETING. Whew! All good, then. The other long Down is equally nice: OFF THE GRID. Nothing else stands out, but that’s okay, because there’s already enough to like. Not a fan of XTS (especially crossing STS), and IS BAD isn’t great, but we’ll just look the other way.

One clue of note: 19a. [Emulate Savion Glover]. TAP. Confession time. I had assumed actor Donald Glover was related to (the son of?) actor Danny Glover. So I assumed again that dancer Savion Glover was related to the actors. Bzzt! All wrong. None of the men are related. If you have six minutes, watch the uplifting video here to learn about Savion and his approach to dancing.

For me, this was the funnest WSJ grid in a while. 4.25 stars. And it’s a debut for one of the constructors. Congrats on a good one!

{insert weekly comment about the hegemony of male constructors}

I could not figure out this theme. The revealer at 64a is [Politician’s spokesperson, at times….or a hint to four answers in this puzzle] and the answer is SPIN DOCTORS. So I looked at the longest answers trying to find an anagram for DOCTOR or an anagram for a kind of doctor. Nope. Finally I consulted Peter’s Email and was seriously underwhelmed. Turns out four of the answers contain DR or RD. Please, someone, tell me I’m missing something. Thanks to alex in comments for enlightening me. Turns out you need to spin the answers around the DR squares, which means the theme answers are not the ones I originally listed. Here’s the corrected version (with Peter’s grid because he highlighted the DR entries and I didn’t feel like spending the time to do that myself). 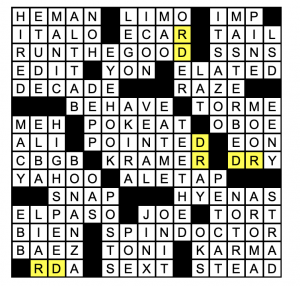 I stand by my nit for 70a [Advice given in mg/day]: RDA. This is inaccurate. Some nutrients are measured in units (Vitamin D) and some in mcgs (Vitamin B12).

Apologies to Peter and Rich. This is a fun theme! And I need to pay more attention.

What I didn’t know before I did this puzzle: that HE–MAN is also known as Prince Adam. Also did not know that Johnny DEPP voiced Sherlock Gnome, that NOH drama has comic interludes called kyogen, and see above about He Zizhen.

The title annoys me, which is probably one more reason I didn’t give the puzzle enough thought.  Doctors don’t “make the rounds.” Legend has it that we say “make rounds” because the wards at Johns Hopkins, the first modern academic hospital in the US, were round. Please note that I said “make rounds,” not “make the rounds.”

I liked today’s NYT, though I wasn’t a fan of figuring out how to get the NYT app to register it as correct.  More on that later, so let’s talk about why it was so hard to determine what to do with that: 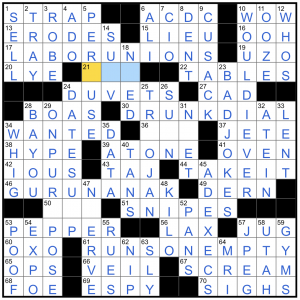 One could say that there’s nothing going on with the grid, because there *is* nothing going on – those three slots in the grid are blank, with down entries maneuvering around them.  That’s not the only thing going on, though – as explained at 61A, these entries are running on empty, and in accordance with that, each set of three empty squares has RUN on top of it, from LABOR UNIONS, DRUNK DIAL, and GURU NANAK, the founder of the Sikh religion.  It’s all very clever, and I liked it a lot.

What was a little frustrating was figuring out how to signal to the app that I was done with today’s puzzle.  Per Wordplay, I could have put any of the following in the blank squares to signal I knew what was going on: rebus squares with NOTHING, EMPTY, or BLANK in each square, or the single values X, ?, or -.  That’s a lot of things, none of which made sense to me mid-solve.  I ended up just hitting the “reveal” button when I was down to just the final three blank squares.

I was very tempted to post this video three times in a row, but you get the picture.

All in all, this was very nice!  Another great Thursday grid from Sid. 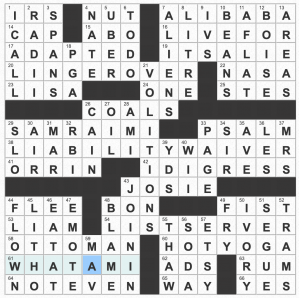 I’m not always a big fan of themes that I don’t see until after the grid is entirely filled in, but I liked this one despite of that. There’s something very endearing and different about the revealer itself, and then finding the answer to be “chopped LIVER” was rather amusing.

Liked HOT YOGA, I DIGRESS (although there are three “I” phrases in the puzzle…), NOT EVEN, IT’S A LIE.

Not sure about ORRIN as clued, AMI (since AM I is central to the theme), and there seemed to be a lot of crosswordy glue, particularly in the middle to accomodate for the grid-spanning themer. 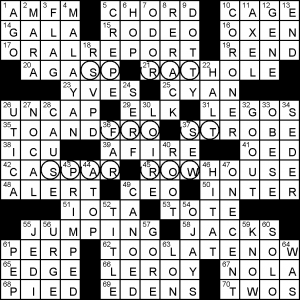 I could literally feel my eyes closing mid-solve so I don’t think this is as difficult a solve as the time indicates. In any case, the puzzle itself has JUMPING / JACKS split across two across entries. I have circled the three JACKS, all fictional – SPRAT, FROST & SPARROW.

ORALREPORT and TOOLATENOW occupy spots where typically one would find theme, but are not thematic. ORALREPORT plus RSVP’D & AGApe/AGASP was my stickiest area of the puzzle. Oh, and throw in [Surrealist Tanguy], YVES – didn’t know the specific YVES and not an easy name to see!

[One of the Magi], CASPAR – good luck finding him in the Bible!

[Kuala Lumpur native], MALAYAN. I suppose, although more precisely a MALAYSIAN. MALAYAN is kind of hard to define. Most people I interact with who identify as Malay in origin are from Indonesia. 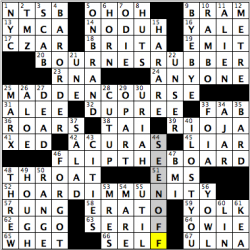 Good day, everybody! Here is hoping that you are doing well as we approach the weekend!

Today’s grid is more fun with syllables, and in this puzzle, phrases that usually have an “er” sound in one of the words is changed to an “or” sound by changing it into a completely different word, and, in turn, changing the phrase’s meaning. The clues to the puns are are all top-notch!

Did not get tripped up in any one place, though there was some uncertainty if the name of a band that I FORGOT (46D: [Drew a blank]) shared the same name as the David Copperfield character URIAH (30D: [___ Heep (hard rockers]). Not too much long fill in this grid to enjoy outside of the theme entries, though I liked ON BRAND a lot (5D: [Consistent with one’s image]). Actually, I did get thrown for a little bit with the clue to I LOST YOU, as I did not think of cell phone coverage for that clue before getting almost all of the letters the first two words entered in through crossings (40D: [Comment said when walking into a bad cell]). It’s almost as if that needed a question mark at the end of that for me to pick that up faster, ironically enough.

“Sports will make you smarter” moment of the day: YALE (16A: [Whiffenpoof’s school]) – The Whiffenpoofs are the world’s oldest a cappella group, as the group, comprised of 14 Yale University seniors, travels the world and performs around 200 concerts a year. In 2015, one of the “Whiffs” was one of the premier college basketball players in the country, Brandon Sherrod. On the court that season following his time with the Whiffenpoofs, Sherrod went on to set a new NCAA Division I record for most consecutive field goal attempts made without a miss (30 straight shots made). How do I know this happened? We were at the arena in person on the day the record broke, on Feb. 5, 2016!! Furthermore, we talked with him after the game and, at the end of the interview, we asked how singing in the group made him a better basketball player and his best (and worst) memories about being a Whiffenpoof. Don’t you love it when sports and a cappella come together????