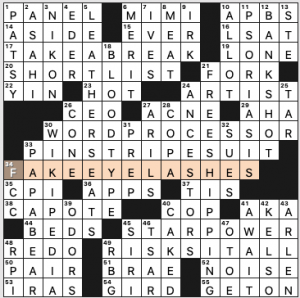 It’s post-debately late and it’s possible the debate offered me a headache, so let’s be expeditious here. Five things:

I didn’t figure out the theme until I found the revealer, and then I giggled. Very fun, and totally on-brand for the Inkubator.

Each theme entry is missing something that we’re all more comfortable without. The revealer is at 58a: [Like four theme entries and many who are working from home]: BRALESS. 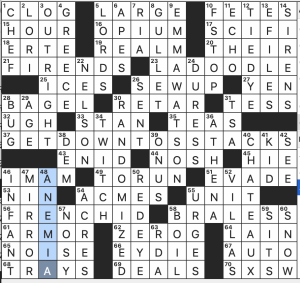 (This reminds me that I’ve seen multiple puzzles recently that did *not* refer to an EEG as a scan. I am deeply grateful.)

What I didn’t know before I did this puzzle: that STAN is Persian for “country.”

Theme: FIRST DANCE (59a, [Traditional start of a wedding reception, or a hint to each starred answer’s opening letters]). Each theme answer’s first few letters spell out a word that can precede “dance.” 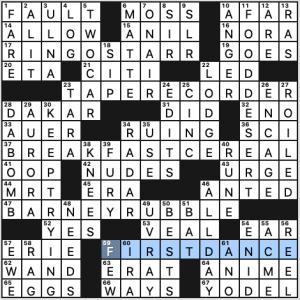 Once I realized I wasn’t meant to look at the whole first word (Barney dance? Tape dance?), I was okay with the theme.

One clue of note: 64a. [“One-Punch Man” genre]. ANIME. I don’t know the show, but I love the clue. (My daughter studied anime, especially gendered anime, in college.) This show, per Wikipedia, tells the story of “a superhero who can defeat any opponent with a single punch but seeks to find a worthy foe after growing bored by a lack of challenge due to his overwhelming strength.”

This appears to be a debut, so congrats are in order. Solid puzzle. 3.5 stars.

FIRST DANCE makes for a perfectly fine premise for a theme, but now I have “Last Dance” stuck in my head as an earworm, so I thought I’d share.

I think this may be the first “lightly challenging” puzzle we’ve seen from Anna Shechtman, who usually bats lead-off for the New Yorker with a hard Monday, so it’s fun to get a look at one of her easy grids! This was a fun, quick solve that still retained some of Anna’s signature English lit angle. 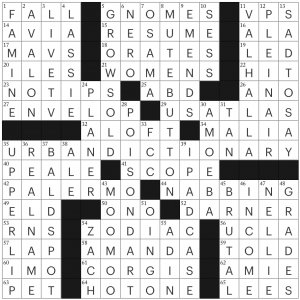 Today’s grid is cute and supports a grid-spanning URBAN DICTIONARY (nice!) through the middle along with some good-sized corners. The NE contains VALHALLA / PLEIN AIR / SAD TO SAY, and the SW has UPPER LIP / REAL NAME / BALD SPOT. We also have the ultra-current MUTE BUTTON and (spoiler alert) Sherlock Holmes murder weapon POISON DART. All solid long entries, and it was easy enough to figure out how to spell PLEIN AIR from the crosses.

Overall, lots of stars for the substantial corners and central entry. This was a fun solve! Happy Mole Day to all who celebrate, and see you next week. 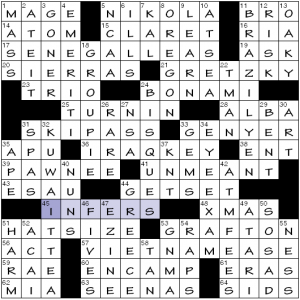 (No, I’ve never seen this before, but it works well.)

Two -eses, two -is, and one -ian. I’m fine with that distribution. Sometimes the capital city is used, other times not. Obviously, Kuwait City and Brasilia are no-gos, so that also makes sense.

This puzzle again came down on the more difficult than usual side. Seems like a real, intentional—and welcome—trend for Friday LATs.