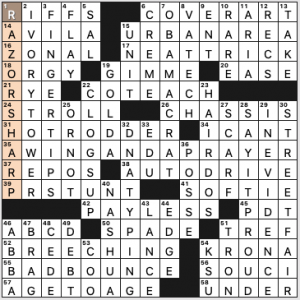 Quick write-up because my internet is spotty tonight.

The hallmark of a Byron themeless is great clues. Among my faves:

Irksome: 19d. [First name of Israel’s first female prime minister], GOLDA. Sure, the echo of “first” gives the clue a nice rhythm, but Meir was the first and only woman to run Israel. Trivia question for you: How many countries have been led by two or more different women?

New to me: OBAMACRAT. Who uses that? Also not sure I’ve seen AUTO DRIVE before. [Car feature with hands-free steering]? Is that for parking, or …?

Fill I liked: NEAT TRICK, CO-TEACH, A WING AND A PRAYER (TV theme song below!), PR STUNT, BAD BOUNCE, RAZOR-SHARP, “say it loud and SAY IT PROUD,” and STREET FAIR.

THEME: Common two-word phrases where the name of a band is second are flipped so that the name of the band is first. Wackiness ensues. 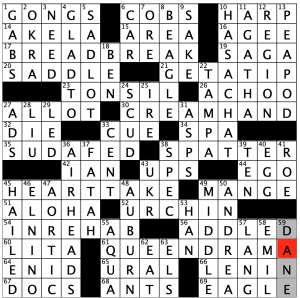 For some reason, the theme took me a while to see, even after completion of the puzzle. I wanted to anagram the second word based on the title, so I go stuck there. Me: Let’s see… BREAD BREAK… is the base phrase…. BREAD BAKER? Maybe…

I finally got up to make a cup of coffee and DRAMA QUEEN came to me. Duh. So obvious in retrospect.

Fun to solve all around. HAS A CHAT, GLAD TO, IN REHAB (gently clued), GET A TIP– nice to uncover. LANG and FATAH were both new to me. 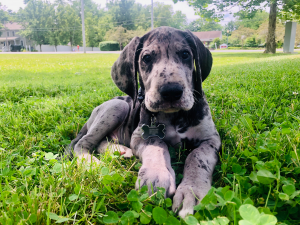 Ellis, the Pretty Good Dane (he’s not Great yet).

Nice clue for EMIL [Name that’s a green fruit backward]. And my DANE was trying to curl up on my lap when I filled in 59D [Great ___ (big dog)]. Now I feel compelled to include his puppy pic (he’s still a pup, but oh how he has grown since then…) 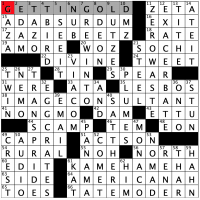 This puzzle was so much fun I didn’t notice Erik’s byline at the beginning! I am not as familiar with Madeline as a constructor, but she is in the database already so this must not be a debut puzzle. But I am game from more like this one! This has so many good entries in it that I could almost list every single clue and expound on it. Very smooth, and the slightly obscure entries are INTERESTING. I feel smarter after solving this one! A solid 4.7 stars from me!

A few of those “interesting” entries:

I DEFINITELY could go on today, but I will stop there. Michigan FINALLY plays football today! 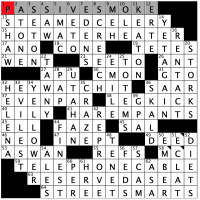 Just when you think you are getting skilled at these themeless puzzles, these Stumpers certainly humble you. Make no mistake: I love the feeling of looking at a wide-open empty grid, and then slowly figuring out the squares almost one by one until the puzzle is complete. Only a few minor errors in the bottom right corner of this one; I think I could have figured it out if I wouldn’t be so impatient. This puzzle, like today’s LAT, has a TON of great entries in it. Difficult, but a fun solve. If you’re solving the Boswords Monday night league, you might agree that those puzzles are darn near Stumper hard. At least to me. Maybe I shouldn’t solve them after 9 in the bed! But this was a true Stumper challenge today. 4.5 stars. 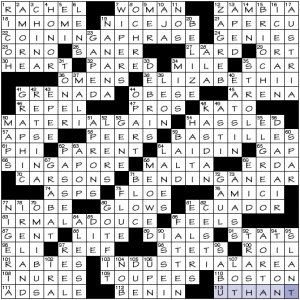 This is one of those intricate themes that’s more impressive for the accomplishment of construction than for the enjoyment of the solve. Once it’s over, to sit back and look at it is to marvel.

The names of countries—entries throughout the grid—are combined and anagrammed to generate recognizable phrases. The countries, not surprisingly, are all United Nations members and are clued with their date of entry into the organization. 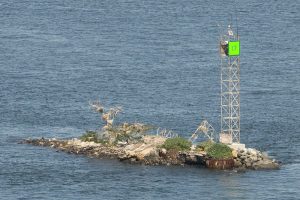 Some bonus material, also: 12a [United Nations member since 1964 (but not part of this puzzle’s theme)] ZAMBIA, 113a [Big name in United Nations history] U THANT.

This thing was exhausting, did I mention? Of course, today is United Nations Day.