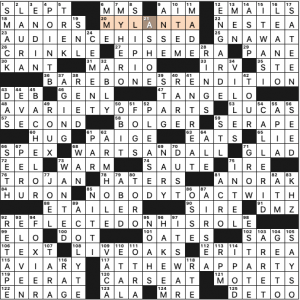 It’s the last Sunday before Halloween so we have a playful holiday theme:

Putting the theme aside, a few multi-word entries grated: “IT WAS I,” “IT’S WAR,” and END IN (which would work better with a FITB clue like [___ a tie] than with [Finish with]; I tried END ON first). There are some clunky single-word (or fragmentary) entries, like OSSE-, ANSE, GENL, and abbreviation pileups (ATM KHZ DMZ, RTE MRE). Also, metric abbreviations generally don’t take an S to form a plural; ten millimeters are 10 mm, not 10 MMS.

Your musical accompaniment, in tribute to the monster mash-up in this theme, is a “Monster Mash” cover by drag star Sharon Needles.

THEME: The word MEAT (or MATE depending on which revealer you’re looking at) can be found anagrammed within phrases. 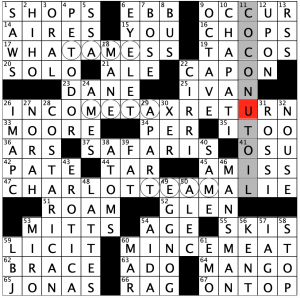 I remember my parents warning me at Thanksgiving dinner one year when I was about seven or eight years old to stay away from the mince meat pie. I don’t know if they were concerned about the cleanliness of my aunt’s kitchen, as she had baked it, or if they just thought it was gross. Regardless, I’ve never had MINCE MEAT (I always thought it was “minced” meat).

The puzzle was one of those right-over-the-plate theme types that we see a lot of in Universal. I haven’t checked the web app, but I’m willing to bet circled letters are still not a thing, which they should be since they are circled in the puzzle that I solved (I’ve made the argument many a time that it’s a turn off- especially to newer solvers- to ask them to count and circle their own squares). However, this one may not suffer as badly as some have without the circles.

CHARLOTTE AMALIE was entirely new to me. Glad to have learned it, though. WHAT A MESS and INCOME TAX RETURN both neatly hide the MEAT/MATE anagram.

P.S. Now that I’m thinking about it, is “Change of Mate” an in-language phrase? If not, is it supposed to be wordplay on a common phrase? If so, what phrase is that?

This puzzle had a lot of bite. In more ways than one.

THEME: Famous people are “transformed” into hideous monsters from mysterious hidden things in the puzzle. 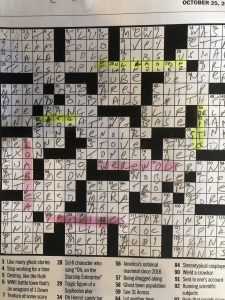 This is tough to lay out… so I think I’ll just describe rather than using the traditional clue/answer format.

This is brilliant. Just… out of this world. Think about all that had to go into this- find phrases with CHANDLER, IGOR, and ERIC in them, then find crosses that could accommodate funky rebus squares side by side, then include their metamorphosized  name somewhere else. It’s stunning. All while maintaining a clean grid with rotational symmetry (a 21x grid with rotational symmetry is not all that common these days in the WaPo!)

Without a doubt, this took me much longer than usual- much of which had to do with solving on paper (my eyes ain’t what they used to be!) However, I enjoyed the challenge and the slow-build to the AHA. This is a theme that revealed itself bit by bit for me.

Lots of extra eeriness in the clues and fill to give it a truly haunting feel.

I stopped rating WaPo, but this is another 5+ Star puzzle.

I’m not a huge fan of anagrams (although I do the Spelling Bee religiously. Go figure). I especially do not like anagrams in my puzzles (although I’ve now started doing cryptics. I blame Stella). An anagram-themed puzzle – with circles, no less – is my idea of Not A Good Time. If I hadn’t been committed to write this review, I would have abandoned the puzzle as soon as I realized what was going on. But here I am. The things I do for you.

Anyway. Each theme entry has an anagram of the word STRIDE (a series of missteps. Get it? Get it?). The check in the grid is where my typo was. 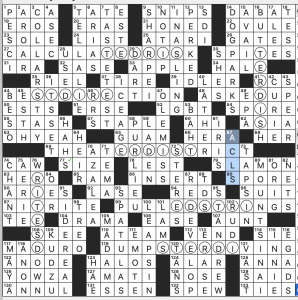 Now I realize that the anagram spans (steps over?) both words in each theme answer. So it’s a feat of construction, I guess. That didn’t make it any more fun to solve.

What I didn’t know before I did this puzzle: that GUAM is the largest of the Marianas. I’m sure Jim P was all over that one.

I love a good title and this one is spot on. Our theme consists of two-word phrases that have two of the same letter eliminated, and the original phrase and modified phrase are put together to form one wackified entry. 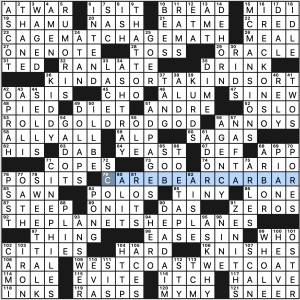 Beautiful execution in this consistent theme. Each one has good surface sense while still being silly, and the clues capture each entry without being unduly awkward. All in all, a fun easy-to-grok theme that delivers with each entry. Brava!

I’m loving the long fill too, especially MCMANSIONS, CINEPHILES, and “ALL Y’ALL.”  Also good: ZENITHS, ASHTRAY, “RUMOR IS…” (although “rumor has it” feels more in-the-language), “THAT, TOO,” “I RECKON SO,” SWEET TALK, and DEAD AIM. Such good stuff!