I had no idea what the theme answers had in common until I got to the revealer, so this played more like an easy themeless for me. It’s a fine Monday puzzle. 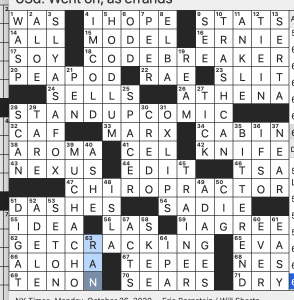 What’s the missing link? We find out at 62a: [Apt command to an 18-, 28-, or 47-Across]: GET CRACKING. Cracking codes, cracking jokes, cracking your back. I like this theme! It’s fun and well-pitched for a Monday.

What I didn’t know before I did this puzzle: that the Spinners recorded a song about SADIE.

Looks like we’re in for a week’s worth of Halloween-themed puzzles at the WSJ. I can think of worse things. In today’s outing, we have a list of actors who have played ghosts on the big screen. 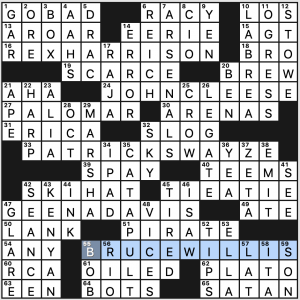 I enjoyed this, even if it’s just a straightforward list. I wish it was a little more evenly balanced, gender-wise. Can you name some other well-known ghostly roles?

I’m not seeing any extra-sparkly long fill, no doubt because of the 13-letter central theme answer restricting the flow of the grid, but ARSENALS and CATAPULT are solid enough. I struggled with PALOMAR [Caltech’s ___ Observatory] because I tried to shoehorn GRIFFITH in there. I did like the extra Halloweeny touches such as DRAC, PIRATE, EERIE, witch’s BREW, SEANCE, and the spooky vibe in many of the clues.

A light theme to start the week, but it should be fun. 3.4 stars.

Well this puzzle just sent me into an emotional spiral about this never-ending pandemic and missing real life and my family (which will be explained later in the post), but that’s not Patrick Berry’s fault! Going to do my best to write this post without letting that color my take on the puzzle, which is very good. 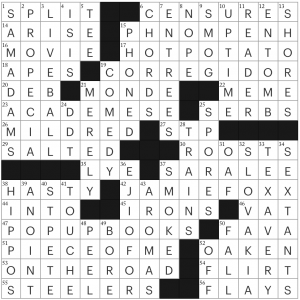 The grid today features four chunky corners with some excellent longer stacks in each one. My favorite corner stack was the SW, with POP-UP BOOKS / PIECE OF ME / ON THE ROAD / STEELERS. I also really appreciate the crossing of JAMIE FOXX with TEX AVERY and SEXTANTS — hard to get that double-X in without sacrificing something, but Patrick Berry has pulled it off! This is also the kind of grid that makes me wonder where the constructor started. It doesn’t *really* seem to have any seeds (unless the JAMIE FOXX angle was the starting point), which makes me think maybe the grid design came first and then he filled it? If that’s the case, I’m just in awe of how every single long entry managed to be completely solid (except maybe PROPECIA? I don’t really like brand-name drugs in grids, but that’s a small price to pay). Also, only 6 three letter entries! Just great.

The part of this solve that wrecked me was the clue on STEELERS. I’m a lifelong STEELERS fan from Pittsburgh, so I went digging for my video of terrible towels from a STEELERS/Bills game I went to with my family last year. I then watched said video and straight-up burst into tears?? I can’t really explain it. Here’s the video I took of thousands of STEELERS fans waving their terrible towels to Renegade.

Overall, I liked the puzzle a lot. I also cried a lot. What a way to start the day! Lots of stars from me.

Sally Hoelscher’s Universal crossword, “But Is It Art?” — pannonica’s write-up 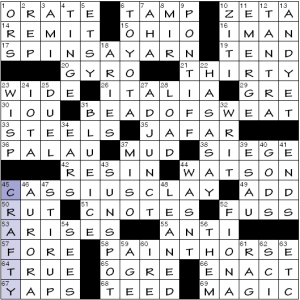 Revealer over in the southwest at 45-down: [Sly, or an alternate title for this puzzle?] CRAFTY. 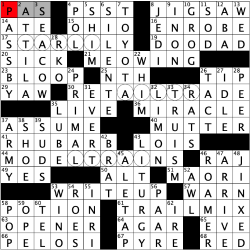 I had a little trouble getting started on this puzzle, to the point where I thought, “Should this have been a Tuesday or even a Wednesday?” But in the end my 2:01 time was pretty Monday-normal, so I mostly blame 1-Across. When I see the clue “June honorees,” my mind goes instantly to GRADS or DADS, neither of which has three letters; it’s the less-common plural PAS that was wanted. I think I might have clued this as “Dads by another name” or something like that to rule out that line of thinking. (Or how about some ballet with “___ de deux”?)

Now onto the thematic material: As per the uzh on Monday, we’ve got a revealer near the bottom of the grid, at 61-Across: TRAIL MIX [Backpacker’s snack, and a hint to the circled letters]. Like last Monday, we have anagramming happening, in this case the letters in the word TRAIL, which are MIXed to provide three new combinations. Unlike last Monday, these combinations are not themselves words, so the circled letters are there to help you identify the anagram in each theme phrase. (I’ve bolded the letters below to call them out more.)

In each case, the letters in TRAIL spread out across both words of the theme phrase, which is nice. I could’ve done with one more theme entry given that there are only three of them not counting the revealer and they’re quite short, but I also recognize that brainstorming a theme set that fits the pattern AND has the TRAIL letters split across both words every time was probably not the easiest.

I found some of the fill to be more fun and evocative than the theme entries themselves — some unusual, but totally fair for a Monday, stuff included RHUBARB, JINXED, JIGSAW, and MIRACLE.