This week, Matt wants us to find a five-letter word that’s part of a certain set. 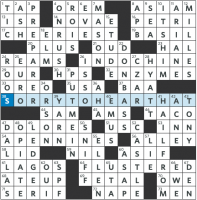 There look to be five themers, and one hopes that each will lead us to one letter in that five-letter word:

I figured we were looking for some encrypted word in each of the themers, maybe that were each part of a set? But I couldn’t figure out the enumerations in the clues (were they the lengths of the words we’re looking for?), and I didn’t see anything immediately. Then Jesse suggested collaborating, since he’d found the first step but had gotten stuck. Turns out, each enumeration indicates the number of items in the set that each encrypted word belongs to, and together we made short work of four out of the five:

*That last one took us forever, but then finally it jumped out at me:

APENNINES == PENN is one of 8 Ivy League Universities [Note that we have already established my shite ability to recognize items in this category.]

Now we have ERIE DOC EARTH PENN LUST — EDEPL? PLEED? What set does that belong to? And what does the title, “Just a Step More,” refer to? A step to the next one on the list? Clearly MARS is the next planet after EARTH, last time I looked, and maybe we could order the Ivies in reference to their founding dates or endowment size (still very large, last time I looked), and DOC was like the leader of the Dwarves and the other ones followed him around, but that didn’t help.

So we decided to try a very typical Gaffney move, which is to match the first set of extracted letters/words to other entries in the grid. And there we are!

Take those added letters, and you have SMELL, which is a five-letter word that is part of a certain set — the five senses — and our answer.