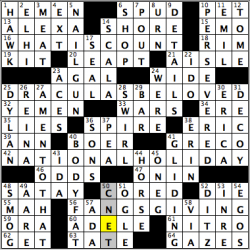 Hello everybody!! At this time, a whole nation will once more be on edge as Election Day will be right at our doorsteps. At least for the rest of this week, the fear that we could also be concerned with are the socially-distant scary creatures that will lurk at our doorsteps and nearby as Halloween approaches.

And now we come to today’s puzzle, in which the theme is a question and answer of a Halloween dad joke that’s pretty cute and has some bite to it!

Along with the chuckle to be had with the grid, lovely to see some long non-themed entries like AMEN TO THAT (27D: [“You said it!”]) and PERSEVERED (10D: [Kept at it, no matter what]). Any time I am able go to my favorite Thai place for the lunch special, I always have a chicken SATAY, though I don’t know how/why I started eating it in the first place (48A: [That dish served with peanut sauce]). Probably was because it had “chicken” in the description, though I never have been a fan of peanut butter or any sauces/creams derived from peanuts. But, for some reason, grilled chicken and peanut sauce works real well for me! Don’t know how many people use CNET nowadays, but probably about a decade ago, I always went to that website for software downloads (50A: [Online tech news site]). Time to pan fry some MEAT (specifically some ground chuck) right now, and have a hearty, non-Thai meal (3D: [Companion of potatoes]).

“Sports will make you smarter” moment of the day: HAWK (1D: [Bird of prey]) & SPUD (6A: [Tater]) – Two for the price of one, as we get to talk a little bit about one of the giants in the history of the NBA’s Slam Dunk Contest, 5-foot-7 Anthony “Spud” Webb. Webb played his first six seasons in the NBA as an Atlanta Hawk, from 1985-1991, and is best known for winning the 1986 Slam Dunk Contest and becoming a nationwide sensation for his extraordinary leaping ability for his height. Apparently, his entry into the contest, held in Dallas’ Reunion Arena, was a surprise, and his Atlanta teammate, 1985 Slam Dunk champion Dominique Wilkins, was caught off-guard as well. Webb played 12 seasons in the NBA, averaging 9.9 points and 5.3 assists per game. 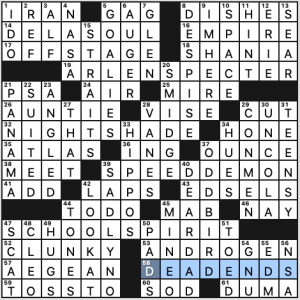 Fairly straightforward and it works. I’m sure it’s been done before, but—check that. I just looked in the cruciverb database and I’m pleased to not find any similar use of this revealer.

In the fill, I like “SADLY, NO” the best, but also good are GOALIES, OFF STAGE, ODD BIRD (I wanted ODD DUCK), and DEAR DAD [Start of a letter home, maybe], though how many of us went with DEAR MOM first?

I don’t think I’ve come across the word ANDROGEN [Testosterone, for one] before, but knowing andro- is the Greek prefix for “man” helped me sort that one out. MAB [Fairy queen] was another one I had to work at. I’m wondering if that initial letter crossing MINEO caused some Naticks. 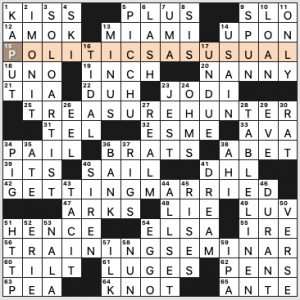 Today’s constructing duo are a first-timer and a seasoned (but young!) pro, and the results are super smooth. The theme draws on letter banks, and the constructors found some apt phrases that can be built from the letters in some words/phrases that are isograms (meaning they don’t repeat any letters—though what you build from the letter banks does not have that restriction):

The fill and clues throughout were quite good, weren’t they? A chocolate KISS crossing KAPUT made for a great start to the puzzle, and everything else lived up to that promise. Other fill I liked: “I’M ON IT,” TABLE LINEN (a term I saw a lot this weekend when shopping online for a new tablecloth—sigh, nothing really grabbed me. Anyone got a recommendation for places with nice but pragmatic tablecloths?), and Machu PICCHU in the grid instead of tucked in an INCA clue.

Here’s a “Paradise” video, but it’s from Coldplay rather than a SOLO ARTIST.

I am going to be lazy again this week and re-post what I wrote on April 14, 2020, just a few short months ago, but still knee-deep in this pandemic, which I reference in the comments. It seems like YEARS ago. I am pretty sure this may be the last of the retrospective Jonesin’ puzzles; I am under the impression that there would be 12 of them, and this is puzzle #1012, so new puzzles next week!  Anyway, here is that write-up from 6 months ago: 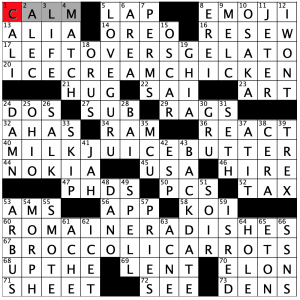 This is no doubt another puzzle fueled by the coronavirus shut in situation: we all cannot eat out every meal! Here are the theme entries:

I like how the levels in the fridge are in order, if you have a fridge with the freezer at the top. Many newer ones are nothing like that these days, but this is the traditional order. Also, Matt’s fridge must be bare, as the main level only has the one theme line! We are going to have to get creative in making a meal! I see enough for a salad, perhaps with added chicken,  and there are a couple of items for dessert. Hopefully there is some liquor to go with the juice! 4.3 stars for another self-isolation puzzle!

I am also being lazy because I was up late on the Boswords Twitch stream, which you can find here. That was a lot of fun talking crosswords for a few minutes! See you next week for what should be a fresh Jonesin’! 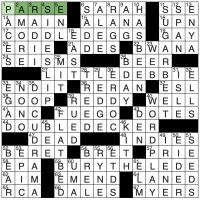 I should have seen this theme coming, but this was a fast solve. The revealer makes it crystal clear:

A common term in the newspaper business that is dying a slow death, I suppose this term can apply just as equally to an internet article. I am old, and I still somewhat enjoy the newspaper, but I wonder how long it will be before they don’t exist anymore. The business model doesn’t seem to work anymore, but the paper still fills a need in several areas, so it is a delicate dance. But I digress: nice puzzle! Nothing too difficult, except for the upper NW corner, which seems like it has just enough hard entries to take this above a Monday level. 4.3 stars.

A crossword that belongs in the classified ads! 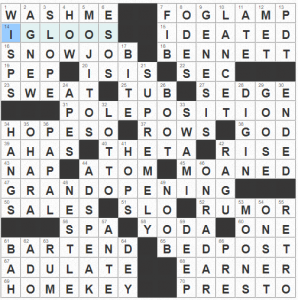 Solid and consistent set. I like this puzzle a lot- it’s one of those that’s perfect for introducing people to crosswords, especially because of the repetition in the clues and the two-word phrases where the second word is a synonym for an employment role.

If I’m being picky, it can be visually confusing when a seven-letter themer is amongst other seven-letter entries, so they don’t pop as much as they should. One of those competing seven-letter words is BARTEND too, which feels like it has to do with actual employment.

Don’t much understand the ? clues on 70A and 14A. For 70A the clue is [The magic word?], but PRESTO to me does sound like one of those words… I’m not sure what the “The” is referring to in the misdirection. PLEASE, perhaps? For 14A [Block houses?] I’m not sure what the misdirection is either. I get that an IGLOO is made of blocks of ice, but are “block houses” a thing?