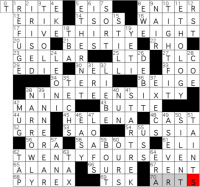 hello and welcome to episode #647 of matt gaffney’s weekly crossword contest, “Time to Reorder”. for this week 4 puzzle, the instructions tell us that we are looking for what it often takes for puzzlers to solve tough metas. what are the theme answers? well, there are two things going on here. first, each of the long across answers is a spelled-out numeral:

second, and maybe first—since i, at least, noticed this before i even got to the theme answers—but there is an implied T before the start of 1-across, because the clue is {Overused, as a phrase} and the answer that appears to fit into the grid is RITE, when it should obviously be TRITE. what’s going on there?

well, the first thing i tried was looking at the letters in the squares numbered 5, 38, 19, 60, 24, and 7. that’s ENYOLS, which … is nothing. i suppose that’s not surprising, since this wouldn’t be much of a week 4 puzzle if that’s all there was to it. it also would not explain the mysterious outside-the-box T in the upper left.

the next thing i noticed was that the numerals 538, 1960, and 24/7 contain each of the digits 0 to 9 exactly once each. aha! based on the title, then, this is a reordering of those digits. so we probably want to just look at the letters in boxes 0–9. what’s in box #0? why, that extra T, of course, as it’s to the left of box #1. taking those letters and reading them off in the order 5381960247, we get ETERNITIES, which is indeed what it might take puzzlers to solve tough metas… although that was not the case with me this week, as it all fell rather quickly for me. (unlike last week’s, which i never got.)

i thought this puzzle was quite good, but really much easier than i was expecting for a week 4. i’m not complaining, mind you—still nursing a severely wounded pride after missing last week, and getting this one more or less right away didn’t hurt. although the mechanism is pretty easy to suss out, the grid constraints aren’t insignificant, since the reordering of whatever ten-letter final answer matt wanted has to form valid entries at the top of the grid. for example, he couldn’t use NINETEEN OH SIX for the middle themer, since then he’d have to switch the T and I at 0/6. ETS would work at 5-across, but IRITE isn’t anything at, um, “0-across”.

this is also a perfectly apt title, as it’s an in-the-language phrase that hints at both the mechanism (“reorder”) and the final answer (“time”). the second part is only clear in retrospect, of course, but it’s a nice little bonus aha.