Let’s get this out of the way. At 4d, WET LOOK, is clued [Greaser’s style]. I have no problem with the entry, but that clue, though. Growing up in California, I’m used to hearing that word in a derogatory context. Every dictionary I just checked lists an offensive meaning, so I can’t fathom why it’s in this puzzle at all. Sure, there are other meanings, but nothing about that clue and answer tells me that it’s not using an ethnic stereotype. Further, there’s a synonymous offensive term also starting with “wet___”. I’m sure there’s a better clue out there.

Moving on. The theme today is not so much Halloweenish, but it is centered around the unexpected. I guess the idea is that Halloween is filled with surprises and so is this puzzle. (I know it’s a stretch; work with me here.) 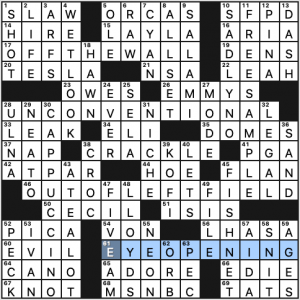 Cute. I’m partial to the lively, idiomatic phrases, but UNCONVENTIONAL has its play on words going for it. Overall, a fun set.

The marquee Downs are CAPPUCCINO (don’t forget that second C), a Costco FREE SAMPLE, and FISHNET stockings. I also like SADLY, NO, but it was in yesterday’s grid, too. Talk about surprising.

New to me are Robinson CANO of the Mets and KOFI Kingston of WWE. I needed every crossing for each of them, but they were all fair enough.

One (other) clue of note: 3d. [Weimaraner warnings]. ARFS. These are big dogs. To me, ARFS are for little dogs.

Cute, fun puzzle, but one clue brought me down. Three stars. 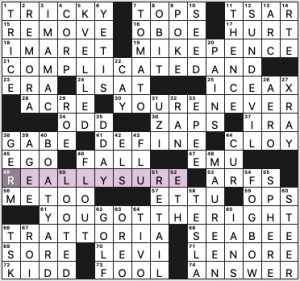 The theme is a 60-letter portion of a quote, which is a weird approach to take. It works okay given the teaser clue plopped at 1-Across: [With 21-, 30-, 49-, 61- and 74-Across, end of a Carrie Bradshaw quote that starts “Men in their 40s are like the New York Times Sunday crossword puzzle …”], TRICKY, / COMPLICATED, AND / YOU’RE NEVER / REALLY SURE / YOU GOT THE RIGHT / ANSWER. We can agree that the reductive approach of the Sex and the City writers isn’t really worth propagating, yes?

Outside of piecing together the TV line, there wasn’t much to love in the puzzle. A singular SUN DEVIL is all right, as are TRATTORIA and KVELLED. In the “ugh” category, there’s MIKE PENCE. Gross. In the “meh” category, we’ve got TSAR IMARET ARFS ETTU ETH and IANS, among other blah fill.

I know Peter strives to never repeat a clue, but I gotta say, cluing ICE AX as [Piolet, e.g.] is not right for a Wednesday NYT.

My guys were watching the World Series game and the MLB commissioner came out to discuss the COVID-positive player pulled from the game (!), something along those lines—and none of us could remember the commish’s name. I Googled it—Rob Manfred. Which sent me straight to YouTube for some Manfred Mann music:

I enjoyed this puzzle! It had a lovely grid design, a lot of entries I enjoyed, only a few things I didn’t, and is technically very impressive.  Quick writeup below: 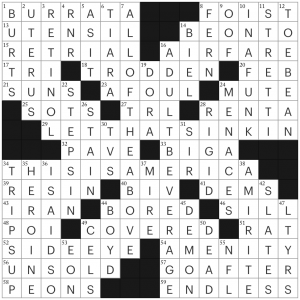 The grid is very pretty and also quite ambitious. The four long entries (LET THAT SINK IN / THIS IS AMERICA / ALL OF THE ABOVE / ADULT BEVERAGE) cross each other within the same 3×3 square in the middle, which I imagine was really hard to do without sacrificing too much fill. In fact, even finding four 13-letter entries that *could* cross like this probably took a lot of work and is super impressive and technical. That they are all *excellent* long entries makes this even more impressive (and if you haven’t seen it, definitely check out the video for the Childish Gambino’s THIS IS AMERICA. I also love a lot of the medium-length entries: IN A FUNK / TOE BEAN / BURRATA / I SAID SO / SIDE-EYE are all awesome, and even some of the short fill made me smile (specifically, it was fun to be reminded of the existence of TRL).

Overall, tons of stars from me. Happy Wednesday! Vote! 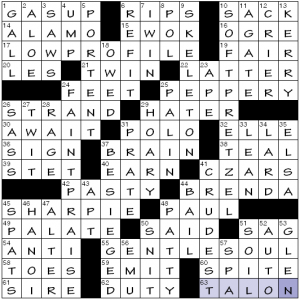 The theme is that the long answers start with words that can describe diminished sounds.

That last one—gentle—doesn’t seem to work as well for me, but I can’t quite put my finger on why. Certainly—and pragmatically—they can all precede the word ‘sound’, furnishing approximately the same meaning. So I guess this is nevertheless a successful theme.

First thing I want to do now is get the big duplication out of the way: 14a [1836 siege site] ALAMO and 37d [Under attack from all sides] BESIEGED. I mean, c’mon. 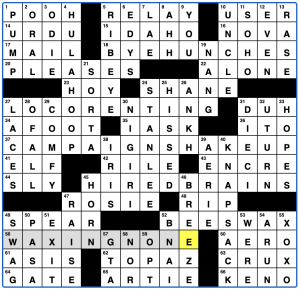 It took me two seconds of looking at the theme entries clues and thinking about the title of this week’s puzzle (“Trail Mix”) to spot what was going on:

This was a cute theme, even if I was not fully in the political headspace for it.  Each of these entries is the names on a political ticket (BIDEN HARRIS, for 45A, the most current campaign of the puzzle), anagrammed and reclued.  Elsewhere in the mix were BUSH CHENEY at 18A, CLINTON GORE at 27A, and NIXON AGNEW at 56A.

Elsewhere in the fill, this was pretty nice! I’m not sure how I feel about ENCRE being clued by “Ink for un tatouage” – the goal of the clue is to get me to write the French word for “ink” in the blanks of the puzzle, but something feels off about the word “Ink” being in the clue. OTOH, “tatouage” might not immediately jump out as being the French word for tattoo to all solvers. Le sigh. 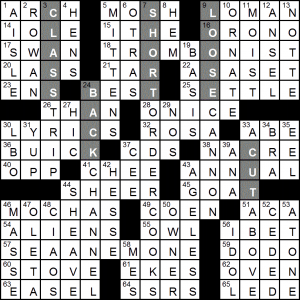 Today’s theme is a fairly standard, albeit vertical, “words with” theme. ACUTABOVE implies that the first word of four down answers fits the pattern “CUT ___” – CLASS, BACK, SHORT, and LOOSE. SHORT can actually take CUT both above and below, which confused me at first.

Tough fill for a basic theme: