First off, I love the look of this grid. It’s got a great visual appeal. The danger for the constructor is that those huge corners would be tough to fill. But Ross Trudeau is a pro, and this thing just flows. In fact, I got one of my fastest times for a Thursday on this grid.

The theme is hanging BATs. The main theme answers all have the trigram BAT within, but “hanging” in the Down direction. The revealer at 41a is BAT CAVE, clued [Grotto under Wayne Manor, and an apt title for this puzzle]. 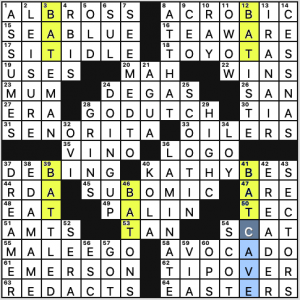 Notice that the theme entries aren’t symmetrical. Necessarily, they need to be at the top of a section so that each BAT can hang from its “ceiling.” And it just works so beautifully. What a fun theme!

And yeah, with those big corners, you’d think there be a lot of kludgy fill. But it’s really kept to a minimum, and in fact, there’s a lot of fun stuff to sink one’s teeth into: SEA BLUE, LEISURE, TOYOTAS, IRAN AIR next to CESSNAS, DREAMER, EDAMAME, a bruisable MALE EGO, AVOCADO, and TIP OVER. Plus, GO DUTCH, SEÑORITA, and SCOOT IN. 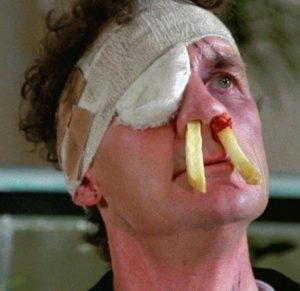 Beautifully designed and executed theme. 4.5 stars from me.

Today’s NYT from Kurt Weller (which appears to be a debut!) is the type where it’s easier to have the revealer first, then talk about all the clues it’s affected.  So:

71A: “I’m busy”…or, if read in four pieces, an aid in solving several clues here — NOT NOW

Parsing this into NO NO helps make a bunch of clues in the puzzle start to make sense: 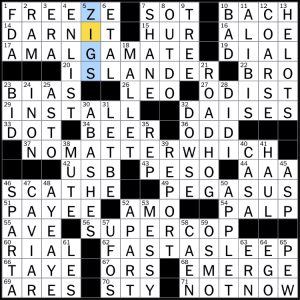 There were some of those I didn’t even catch until I was going over this grid with a fine-toothed comb to catch all the affected clues!  Very cleverly done.

Which entry gave you your AHA moment?  Mine was mindlessly filling in CAVIAR based on the crossings I had, then needing to go back to figure out why I had done that, since the clue didn’t immediately scream “caviar”.

I’m not sure if this is a slightly harder themeless than Peter’s given us lately or my brain is kinda mushy, or both.

Peter’s themelesses often have echoing entries in the NW and SE. This time we get DILLY–DALLY and SILLY SALLY. Both are delightful. I liked both stacks – the NW has GRABS A SEAT and ALMOND MILK and the SE has SNEAK A PEEK and NAPA VALLEY. Fun! 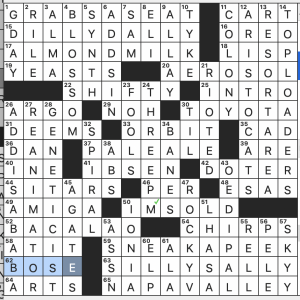 What I didn’t know before I did this puzzle: a loooong list today! I did not know that NOH is Japanese for “talent” or that SITARS have two bridges. I didn’t know the tagline for REANIMATOR (also a patented Peter Gordon Very Long Clue) or that Eva Gabor voiced The Duchess in The ARISTOCATS. I was not aware that Rocky V won eight Razzies. I’d never heard of the picture book SILLY SALLY. I did not know that Amar BOSE was inducted into the National Inventors Hall of fame for his work on feedback control.

THEME: Phrases reimagined as if food were going away 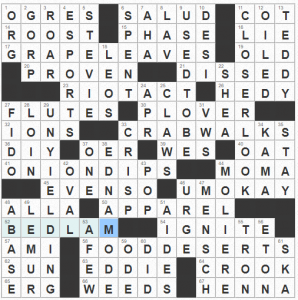 I absolutely love everything about this puzzle. The set of themers if so much fun (are there any others that would even work? I can’t think of any…) and uses such playful language. I particularly like ONION DIPS. I have a student who always says “I’m gonna dip” when heading out, and it makes me smile. FOOD DESERT is a phrase that I never tire of (UPDATE: see comments- I hadn’t fully realized it’s negative connotation), and with the added twist of FOOD DESERTing in this puzzle, it makes it even more enjoyable.

The rest of the grid is spot on too. From fill like UM OKAY,  EDNA MODE, and CLOSER LOOK, to clues like [2020-2019], which is not referring to a span of a backwards year, but is a mathematical equation with an answer of ONE.

Thanks so much for this one, Sophia!

Far and away my favorite puzzle of the day. 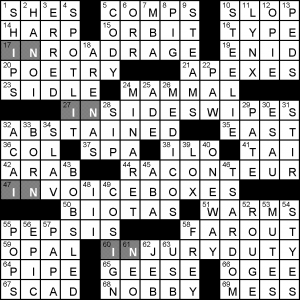 Today’s letter addition theme features IN. The IN’s are consistently placed at the beginning of each answer, which is likely why this ran on Thursday not Friday, which is the usual day for such themes. My favourite of the four was [Embezzlements?], INSIDESWIPES. It was odd that two of the four theme answers had gratuitous plurals, given the many possibilities of such a theme.